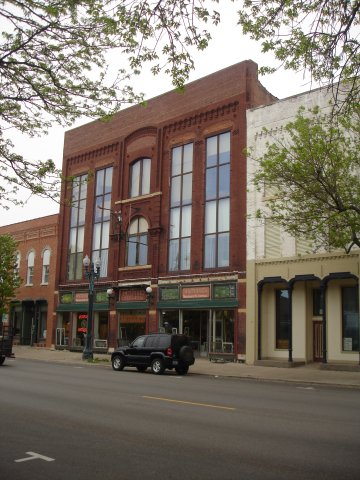 image_caption = The in downtown Savanna.

Savanna is a city in Carroll County, , . The population was 3,542 at the 2000 census. As of 2005 census estimates, the population had decreased to 3,288. [http://www.citytowninfo.com/places/illinois/savanna]

Savanna is located along the at the mouth of the . Going from north to south, the second automobile bridge between and is located just north of Savanna, and is part of the route. The bridge leads to , which is across the river from Savanna. goes through Savanna.

In 1917, the purchased convert|13062|acre|km2|0 of land about seven miles (11 km) north of Savanna to construct the . Originally the land was to be used as a test range for munitions produced at the Arsenal. In 1921, the mission of the installation was changed to be a depot.

Some of the land is being redeveloped. One of the most controversial redevelopment projects was the building of a medium security prison on the depot land. Instead, the was constructed several miles south of Savanna, just outside of the town of Thomson, IL.Which to this day remains empty but may be opened soon.

There were 1,558 households out of which 25.6% had children under the age of 18 living with them, 42.3% were married couples living together, 11.2% had a female householder with no husband present, and 43.1% were non-families. 38.3% of all households were made up of individuals and 19.4% had someone living alone who was 65 years of age or older. The average household size was 2.21 and the average family size was 2.94.

Savanna is experiencing an influx of "weekenders" from & St. Louis, drawn to the area by its small town charm and affordable housing stock. Many homes have been purchased recently & restored as second homes for those seeking a quiet weekend home away from the city.Fact|september 20, 2007|date=September 2007

An annual garden walk takes place in July showcasing some of the area's finest s, which benefit from the areas fertile Mississippi River soil.

The downtown area has revived some since the mid-1990s closing of the Army Depot with the addition of new ornamental lighting to complement the late 1800s buildings. The city is trying to lure more shops to the main street in hopes of becoming more of a weekend destination, like nearby Galena.

Savanna is known as "The Metropolis" of Carrol County because it contains the county's only stop light.