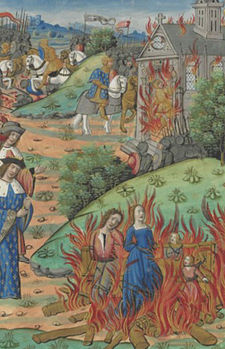 Chram rose in rebellion against his father Chlothar, a king of the Franks, on several occasions. Following one of these rebellions, he fled with his wife and children to the court of Chanao, the ruler of Brittany, pursued by his father. Chlotar gave battle to the combined forces of Chanao and Chram, and his army was successful; the Breton leader was killed, and Chram, delayed in making his escape by sea because of his concern for his family's safety, was captured. Chlothar gave orders that they should be burned, but Chram was strangled before being placed in a cottage,[3] which was subsequently burned. Chlothar reportedly died of remorse later that year.

Translator's note: These are in French