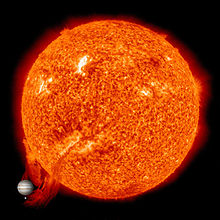 Solar Prominence with images of Jupiter and Earth for size comparison.

A prominence is a large, bright feature extending outward from the Sun's surface, often in a loop shape. Prominences are anchored to the Sun's surface in the photosphere, and extend outwards into the Sun's corona. While the corona consists of extremely hot ionized gases, known as plasma, which do not emit much visible light, prominences contain much cooler plasma, similar in composition to that of the chromosphere. A prominence forms over timescales of about a day, and stable prominences may persist in the corona for several months. Some prominences break apart and give rise to coronal mass ejections. Scientists are currently researching how and why prominences are formed.

A typical prominence extends over many thousands of kilometers; the largest on record was observed by the Solar and Heliospheric Observatory (SOHO) in 2010 and is estimated at over 700,000 kilometres (430,000 mi) long [1] – roughly the radius of the Sun.

When a prominence is viewed from a different perspective so that it is against the sun instead of against space, it appears darker than the surrounding background. This formation is instead called a solar filament.[1] It is possible for a projection to be both a filament and a prominence. Some prominences are so powerful that they throw out matter from the Sun into space at speeds ranging from 600 km/s to more than 1000 km/s. Other prominences form huge loops or arching columns of glowing gases over sunspots that can reach heights of hundreds of thousands of kilometres. Prominences may last for a few days or even for a few months.[2] Flocculi (plural of flocculus) is another term for these filaments, and dark flocculi typically describes the appearance of solar prominences when viewed against the solar disk in certain wavelengths.