The Ministry of Defense (防衛省, Bōei-shō?) is a cabinet-level ministry of the Japanese government. As a result of a law enacted on December 15, 2006, it became a ministry on January 9, 2007.[1] Prior to that, it was the Japan Defense Agency (JDA) (防衛庁, Bōei-chō). It is headquartered in Shinjuku, Tokyo, and is the largest organ of the Japanese government: in 2005, fixed personnel numbered 276,890, including 253,180 active troops.

The Ministry of Defense, as cabinet-level ministry, is required by Article 66 of the constitution to be completely subordinate to civilian authority. Its head, the Minister of Defense, is assisted by a senior vice minister, two parliamentary secretaries, an administrative vice minister, eight directors-general, chief of staff of the Joint Staff office and three branch chiefs of staff.

The highest figure in the command structure is the prime minister, who is responsible directly to the Diet. In a national emergency, the prime minister is authorized to order the various components of the Self-Defense Forces into action, subject to the consent of the Diet. In times of extreme emergency, that approval might be obtained after the fact. 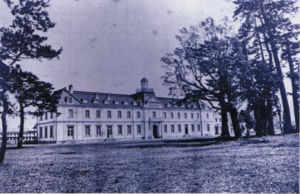 The Ichigaya Military Academy (市ヶ谷陸軍士官校), built by the second French Military Mission to Japan, on the ground of today's Ministry of Defense (1874 photograph).

The Ministry of Defense is headquartered in Ichigaya, Tokyo, on a site which housed the Ichigaya Military Academy (市ヶ谷陸軍士官校), built in 1874, the GHQ of the Imperial Japanese Army before and during World War II, and of the Ground Self-Defense Force following the war. Until May 2000, the JDA was based in Akasaka: this land is now occupied by the Tokyo Midtown.

The Japan Defense Agency was established on July 1, 1954. It took its present name and status as a ministry on January 9, 2007.

In the 1980s, efforts were also under way to facilitate a clear and efficient command policy in the event of a crisis. The government stood by the principle that military action was permitted only under civilian control, but in recognition that delay for consultation might prove dangerous, ships of the Maritime Self-Defense Force (MSDF) began to be armed with live torpedoes, and fighter-interceptors were allowed to carry missiles at all times. Although aircraft had long been allowed to force down intruders without waiting for permission from the prime minister, ships were still required to receive specific orders before interdicting invading vessels. The Defense Agency had recommended drawing up more complete guidelines to clarify what action SDF combat units could take in emergencies.

Cooperation between the SDF and other civilian agencies in contingency planning is limited. No plans exist to ensure the support of civilian aircraft and merchant fleets in times of crisis, even though the SDF transportation capabilities are generally judged inadequate. In 1990 legislation was being studied to provide the SDF with the ability to respond in emergency situations not specifically covered by Article 76 of the Self-Defense Forces Law.

SDF training includes instilling a sense of mission. Personnel are provided with the scientific and technical education to operate and maintain modern equipment and with the physical training necessary to accomplish their missions.

Modern equipment is gradually replacing obsolescent matériel in the SDF. In 1987 the Defense Agency replaced its communications system (which formerly had relied on telephone lines of the Nippon Telegraph and Telephone Corporation) with a microwave network incorporating a three-dimensional transmission system using a communications satellite. Despite efforts to increase stocks, however, supplies of ammunition and maintenance and repair parts in 1990 remained at less than satisfactory levels.

The Diet had passed into law the change of status of the Defense Agency to a Cabinet-level Defense Ministry.[2] The Diet's upper house had voted by a majority, including the opposition Democratic Party of Japan, to amend the change.[3] Bills on transition to the Ministry of Defense became laws on December 15, 2006. Only the Japanese Communist Party and the Social Democratic Party opposed the change, claiming that it can lead Japan into a future war.[3] The MOD was formally established on January 9, 2007.[4] Subsequently, its Defense Facilities Administrative Agency was integrated into the MOD.[1]

In July 2007, the MOD building was attacked by a 21-year-old right-wing activist, who threw a Molotov cocktail in the direction of the building, after forcing his way through the main gate.[5]

In July 1986, the Security Council was established. The council is presided over by the prime minister and includes the ministers of state specified in advance in Article 9 of the Cabinet Law; the foreign minister, the finance minister, the chief cabinet secretary, the defense minister, the chairman of the National Public Safety Commission. The chairman of the Security Council also can invite the Chief of Staff of the Joint Staff Office and any other relevant state minister or official to attend. Replacing the National Defense Council, which had acted as an advisory group on defense-related matters since 1956, the Security Council addresses a wider range of military and nonmilitary security issues, including basic national defense policy, the National Defense Program Outline, the outline on coordinating industrial production and other matters related to the National Defense Program Outline, and decisions on diplomatic initiatives and defense operations.

Below these civilian groups is the uniformed Self-Defense Forces (SDF). Its senior officer is the chief of staff of the Joint Staff office. Its principal functions are to advise the defense minister and to plan and execute joint exercises. The three branches maintain staff offices to manage operations in their branches. Although rank establishes echelons of command within the SDF, all three branches are immediately responsible to the defense minister and are coequal bodies with the Joint Staff Office and the three staff offices.

This structure precludes the concentration of power of the pre-1945 general staffs, but it impedes interservice coordination, and there are few formal exchanges among commanders from various branches. Moreover, some dissatisfaction has been reported by highranking officers who feel they have little power compared with younger civilian officials in the bureaus, who most often have no military experience. To rectify this situation and to increase input by the SDF in policy matters, in the early 1980s the Joint Staff Council was enlarged to establish better lines of communication between the internal bureaus and the three staff offices. A computerized central command and communications system and various tactical command and communications systems were established, linking service and field headquarters with general headquarters at the Defense Ministry and with one another.