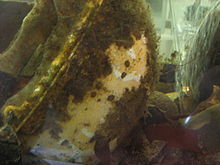 Biofouling on a helmet in a fishtank

Biofouling or biological fouling is the undesirable accumulation of microorganisms, plants, algae, and/or animals on wetted structures.

Biofouling is especially economically significant on ships' hulls where high levels of fouling can reduce the performance of the vessel and increase its fuel requirements.[1] Biofouling is also found in almost all circumstances where water based liquids are in contact with other materials. Industrially important examples include membrane systems, such as membrane bioreactors and reverse osmosis spiral wound membranes cooling water cycles of large industrial equipments and power stations. Biofouling can also occur in oil pipelines carrying oils with entrained water especially those carrying used oils, cutting oils, soluble oil or hydraulic oils.

Biocides are chemical substances that can deter or kill the microorganisms responsible for biofouling. Biocides are incorporated into an anti-fouling surface coating, typically physical adsorption or through chemical modification of the surface. Biofouling occurs on surfaces after formation of a biofilm. The biofilm creates a surface onto which successively larger microorganisms can attach. In marine environments this usually concludes with barnacle attachment. The biocides often target the microorganisms which create the initial biofilm, typically bacteria. Once dead, they are unable to spread and can detach. [3] Other biocides are toxic to larger organisms in biofouling, such as the fungi and algae. The most commonly used biocide, and anti-fouling agent, is the tributyltin moiety (TBT). It is toxic to both microorganisms and larger aquatic organisms. It is estimated that TBT derived anti-fouling coatings cover 70% of the world's vessels. [4]

The prevalence of TBT and other tin based anti-fouling coatings on marine vessels is a current environmental problem. TBT has been shown to cause harm to many marine organisms, specifically oysters and mollusks. Extremely low concentrations of tributyltin moiety (TBT) causes defective shell growth in the oyster Crassostrea gigas (at a concentration of 20 ng/l) and development of male characteristics in female genitalia in the dog whelk Nucella lapillus (where gonocharacteristic change is initiated at 1 ng/l).[4]

The international maritime community has recognized this problem and there is planned phase out of tin based coatings, including a ban on newly built vessels. [5] This phase out of toxic biocides in marine coatings is a severe problem for the shipping industry; it presents a major challenge for the producers of coatings to develop alternative technologies. Safer methods of biofouling control are actively researched.[3] Copper compounds have successfully been used in paints and continue to be used as metal sheeting (for example Muntz metal which was specifically made for this purpose), though there is still debate as to the safety of copper.[6] 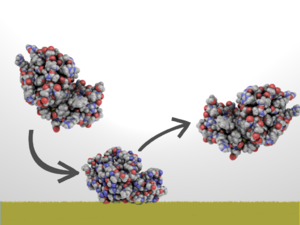 Non-toxic anti-fouling coatings prevent any attachment of microorganisms thus negating the use of biocides. Further, these coatings are usually based on polymers and researchers are able to design self-healing coatings.

There are two classes of non-toxic anti-fouling coatings. The most common class relies on low friction and low surface energies. This results in hydrophobic surfaces. These coatings create a smooth surface which can prevent attachment of larger microorganisms. For example, fluoropolymers and silicone coatings are commonly used. [7] These coatings are ecologically inert but have problems with mechanical strength and long term stability. Specifically, after days biofilms (slime) can coat the surfaces which buries the chemical activity and allows microorganisms to attach.[3]

The second class of non-toxic anti-fouling coatings are hydrophilic coatings. They rely on high amounts of hydration in order to increase the energetic penalty of removing water for proteins and microorganisms to attach. The most common example of these coatings are based on highly hydrated zwitterions, such as glycine betaine and sulfobetaine. These coatings are also low friction but are superior to hydrophobic surfaces because they prevent bacteria attachment, preventing biofilm formation. [8] These coatings are not yet commercially available and are being designed as part of a larger effort by the Office of Naval Research to develop environmentally safe biomimetic ship coatings.[9]

Biofouling is divided into microfouling — biofilm formation and bacterial adhesion — and macrofouling — attachment of larger organisms, of which the main culprits are barnacles, mussels, polychaete worms, bryozoans, and seaweed. Together, these organisms form a fouling community.

Bio-fouling, especially of ships, has been a problem for many centuries and probably for as long as mankind has been sailing the oceans.[10] In Deipnosophistae, Athenaeus described the anti-fouling efforts taken in the construction of the great ship of Hieron of Syracuse (died 467 BCE).[11] Before the 18th century various graving and paying techniques were used to try and prevent fouling using three main substances: White stuff, which was a mixture of train oil, rosin and brimstone; Black stuff, a mixture of tar and pitch; and Brown stuff, which was simply brimstone added to Black stuff.[citation needed]

Copper sheathing was first suggested in 1708 by Charles Perry, as an anti-fouling device but the first experiments with copper sheathing were not made until the late 1750s, at which time the bottoms and sides of several ships' keels and false keels were sheathed with copper plates.[citation needed]

The copper performed very well in protecting the hull from invasion by worm, and in preventing the growth of weed, for when in contact with water, the copper produced a poisonous film, composed mainly of oxychloride, that deterred these marine creatures. Furthermore, as this film was slightly soluble it gradually washed away, leaving no way in which marine life could attach itself to the ship.[citation needed] From about 1770, the Royal Navy set about coppering the bottoms of the entire fleet and continued to the end of the use of wooden hulled ships. The process was so successful that the term copper bottomed came to mean something that was highly dependable or risk free.[citation needed]

Other areas of occurrence

Biofouling can also occur in groundwater wells where build-up can limit recovery flow rates, and in the exterior and interior of ocean-laying pipes. In the latter case it has been shown to retard the seawater flow through the pipe and has to be removed with the tube cleaning process. Biofouling also occurs on the surfaces of living marine organisms, when it is known as epibiosis.