An ice cream soda or float (United States, Canada, United Kingdom, New Zealand, and East Asia), coke float (New Zealand), or spider (New Zealand and Australia),[1] is a beverage that consists of one or more scoops of ice cream in either a soft drink or in a mixture of flavored syrup and carbonated water. 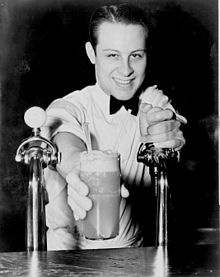 The ice cream soda was invented by Robert M. Green in Philadelphia, PA, in 1874[2] during the sesquicentennial celebration. The traditional story is that, on a particularly hot day, Mr. Green ran out of ice for the flavored sodas he was selling and used vanilla ice cream from a neighboring vendor to keep his sodas cold.

His own account, published in Soda Fountain magazine in 1910, states that while operating a soda fountain at the Franklin Institute's sesquicentennial celebration in Philadelphia in 1874, he wanted to create a new treat to attract customers away from another vendor who had a fancier, bigger soda fountain. After some experimenting, he decided to combine ice cream and soda water. During the celebration, he sold vanilla ice cream with soda water and a choice of 16 different flavored syrups. The new treat was a sensation, and soon other soda fountains began selling ice cream sodas. Green's will instructed that "Originator of the Ice Cream Soda" was to be engraved on his tombstone.[3]

There are at least three other claimants for the invention of ice cream soda: Fred Sanders,[4] Philip Mohr (in 1782 at Fulton and First Streets in Elizabeth, NJ),[4][5] and George Guy, one of Robert Green's own employees.[6]

Regardless of its origins, the beverage quickly became very popular, to such a degree that it was almost socially obligatory among teens, although many adults abhorred it. According to some accounts, it was banned, either entirely or on holy days, by some local governments, giving rise to a substitute treat, the sodaless ice cream sundae. As soda was marketed as a miracle cure, it was often considered a substance that required oversight and control like alcohol, another controlled substance that could not be served or purchased on Sundays in many conservative areas. Many soda fountains had to figure out a way to turn a profit on Sundays when selling soda was considered illegal.[7] The solution was to serve ice cream on these days, as it is merely a food product and not a controlled substance. Soda fountains then coined the term "Sundaes" for the ice cream concoctions that they served on "soda's day of rest".

In Australia and New Zealand, an ice cream soda made with CocaCola or PepsiCola is known as a "spider." Other spiders are usually known by their flavour, as a "lime spider" or an "orange spider".

In Scotland (mainly on the west coast), it is usually referred to as a "float." "Coke" is often used generically to refer to any cola in the United Kingdom, while "soda" is usually taken to mean soda water.

Variations of the ice cream soda are as countless as the varieties of soda and the flavors of ice cream, but some have become more prominent than others. Some of the most popular are described below:

This ice cream soda starts with approximately 1 oz of chocolate syrup, then several scoops of vanilla ice cream in a tall glass. Unflavored carbonated water is added until the glass is filled and the resulting foam rises above the top of the glass. The final touch is a topping of whipped cream and usually, a maraschino cherry. This variation of ice cream soda was available at local soda fountains and nationally, at Dairy Queen stores for many years. 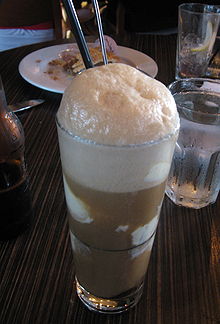 Also known as a "black cow"[8] or "brown cow",[9][10] the root beer float is traditionally made with vanilla ice cream and root beer, but can also be made with other flavors.

In the United States and Canada, the chain A&W Restaurants are well known for their root beer floats. The definition of a black cow varies by region. For instance in some localities, a "root beer float" has strictly vanilla ice cream; a float made with root beer and chocolate ice cream is a "chocolate cow" or a "brown cow." In some places a "black cow" or a "brown cow" was made with cola instead of root beer.

In 2008, the Dr Pepper Snapple Group introduced its Float beverage line. This includes A&W Root Beer, A&W Cream Soda and Sunkist flavors which attempt to simulate the taste of their respective ice cream float flavors in a creamy, bottled drink.

The origin of the name "black cow" has always been of interest to food and beverage experts and allegedly dates to August 1893[11] in Cripple Creek, Colorado. The only source of this story is the great-grand-nephew of Frank J. Wisner, who has popularized it through advertising on his soft drink products and website.[12][unreliable source?] Wisner, owner of the Cripple Creek Cow Mountain Gold Mining Company, had been producing a line of soda waters for the citizens of the then-booming Cripple Creek gold mining district. He had been trying to create a special drink for the children of Cripple Creek and came up with an idea while staring out at his properties on Cow Mountain on a moonlit night.

The full moon's glow on the snow capped Cow Mountain reminded him of a dollop of vanilla ice cream floating on top of his blackened Cow Mountain. As he told the story later, he was inspired by this view to hurry back to his bar and add a big scoop of vanilla ice cream to the one soda water he produced that the children of Cripple Creek seemed to like best - Myers Avenue Red root beer - and served it the very next day. The drink was an instant hit. Originally named "Black Cow Mountain", the local children shortened this to "black cow".[11] Wisner was known to say many times in his later years that if he had a nickel for every time someone ordered a black cow, he'd have been a rich man.

The origin of the Boston cooler lies in Detroit, Michigan, the city in which Fred Sanders is credited with inventing the ice cream soda. The name is a mystery, having no apparent connection to Boston, Massachusetts, where the beverage is virtually unknown.[13][14] One theory suggests that it was named after Detroit's Boston Boulevard, the main thoroughfare of what was then, according to the theory, an upper-class neighborhood a short distance from James Vernor's drugstore.[15][16] Boston Boulevard, however, did not exist at the time. The streets and subdivision that became the Boston-Edison neighborhood, approximately five miles from Vernors' drugstore, were not platted nor incorporated into the city until 1891, and its first homes not constructed until 1905, nine years after Vernor closed his drugstore.[17]

It is known that by the 1880s the Boston cooler was being served in Detroit,[citation needed] made with the local Vernors, an intense golden ginger ale, unlike most modern dry ginger ales. Originally, a drink called a Vernors Cream was served, as a shot or two of sweet cream poured into a glass of Vernors. Later, vanilla ice cream was substituted for the cream to make a Vernors float. Unlike a float, however, a Boston Cooler is blended like a thick milkshake. Both Sanders' soda fountains and Michigan-based Big Boy restaurants (which had Boston coolers as a signature item until the Elias Brothers sold their franchise to new ownership in the 1980s) used their milkshake blenders to prepare the drink.

It can be found most often in the Detroit region's many Coney Island-style restaurants, which are plentiful because of Detroit's Greektown district influence. National Coney Island is one of the few restaurant chains to list the Boston cooler in their menu. The Kerby's Koney Island chain lists a Boston Cooler on their menu, but their variant is actually a Vernors Float, as the ice cream is not blended. It is also found at the Detroit-area Dairy Queens and at Halo Burger, a Flint, Michigan based fast food chain.

A Boston cooler is also available on the menu at the Chow Food Bar[18] in San Francisco.

Universal Studios park serves a concoction aptly named "Butterbeer" from the famous Harry Potter series which is a root beer and butter scotch version of the ice cream soda. Recipes for it can be found at many places online. [19]

A Snow White is made with 7 Up or Sprite and vanilla ice cream.

The origin of this variation is unknown, but it is found in some Asian eateries.

The Friendly's chain also had a variation known as a "sherbet cooler," which was a combination of orange or watermelon sherbet, vanilla syrup and seltzer water. (Presently, it is billed as a "slammer".)

In Brazil, an ice cream soda made by combining vanilla ice cream and coca-cola is called a vaca preta or black cow.

In Brazil, a vaca dourada or golden cow is an ice cream soda combination of vanilla ice cream and guarana soda.