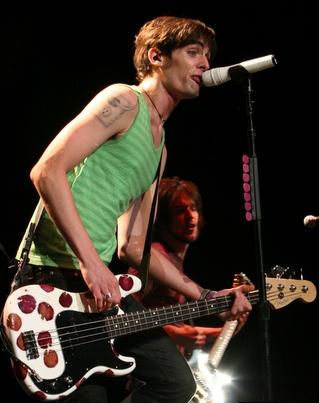 Tyson Jay Ritter (born , ) is the lead vocalist and bass guitarist of . On top of being a singer-songwriter, he has also worked as a model and Hollywood actor.

Ritter lived in for most of his life. Being an fan, Tyson loved rock music. Tyson met up with at a party, where he falsely informed Nick he could play bass in order to join Nick's current band. Tyson quickly picked up bass, and Nick and Tyson eventually formed their own band.

Ritter is also a model and has appeared in as well as in various advertisements and fashion shows. Most recently he was featured as a model for the Hugo Boss Orange F/W08 campaign. [http://www.thefashionspot.com/forums/f79/hugo-boss-orange-f-w-08-09-lara-stone-70076.html] He recently wrapped his debut film performance in the comedy "" that was released August 22, 2008. He currently lives in . [ [http://myspace.com/allamericanrejects MySpace.com - The All-American Rejects - STILLWATER, OKLAHOMA - Rock / Power pop - www.myspace.com/allamericanrejects ] ]

Like the other three members of AAR, Tyson has a tattoo of the AAR logo on his right breast. But to make his a bit different from the others, he later got another tattoo of a power outlet with a cord plugging into his AAR tattoo. [http://www.rollingstone.com/news/qa/story/9448181/allamerican_rejects_tyson_ritter] He also has a tattoo of a small black heart on the outside of his right thumb, like bandmate .

He is not related to .