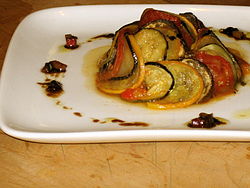 Confit byaldi is a variation on the traditional French dish ratatouille by French chef Michel Guérard.

The name is a play on the Turkish dish "İmam bayıldı", which is more of a stuffed eggplant.[1][2] The dish has appeared sporadically on menus in France and the United States ever since.[citation needed]

The original ratatouille recipe had the vegetables fried before baking. Since at least 1976, top French chefs have prepared the ratatouille vegetables in thin slices instead of the traditional rough-cut. Michel Guérard, in his innovative book founding cuisine minceur (1976),[3] recreated lighter versions of the traditional dishes of nouvelle cuisine.[4] His recipe Confit bayaldi, differed from ratatouille by not frying the vegetables, removing peppers and adding mushrooms. Keller's variation of Guérard's added two sauces, a tomato and peppers sauce at the bottom (pipérade), and a vinaigrette at the top.[5][6]

American celebrity chef Thomas Keller first wrote about a dish he called "byaldi" in his 1999 cookbook, The French Laundry Cookbook.[7] Beginning in mid-2000, he served as food consultant to the Pixar film, Ratatouille, allowing its producer, Brad Lewis, to intern for two days in the kitchen of his restaurant, French Laundry. Lewis asked Keller how he would cook ratatouille if the most famous food critic in the world were to visit his restaurant.[1] Keller decided he would fan the vegetables accordion-style with a palette knife.[8] 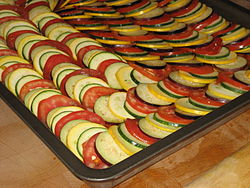 A pipérade is made of peeled, finely chopped, and reduced peppers, yellow onions, tomatoes, garlic, and herbs. The piperade is spread thinly in a baking tray or casserole dish, then layered on top with evenly sized, thinly sliced rounds of zucchini, yellow squash, Japanese eggplant, and roma tomatoes, covered in parchment paper, then baked slowly for several hours to steam the vegetables. The parchment is removed so that the vegetables may then roast, acquiring additional flavor through caramelization. To serve, the piperade is formed into a small mound, and the rounds arranged in a fanned-out pattern to cover the piperade base. A balsamic vinaigrette is drizzled on the plate, which may be garnished.[9][10]

Despite the delicate preparation and presentation, confit biyaldi, like most ratatouilles, improves with age overnight in the refrigerator.[7]