The Central Mexican Plateau, also known as the Mexican Altiplano or Altiplanicie Mexicana, is a large arid-to-semiarid plateau that occupies much of northern and central Mexico. Averaging 1,825 m (5,988 ft) above sea level, it extends from the United States border in the north to the Cordillera Neovolcánica in the south, and is bounded by the Sierra Madre Occidental and Sierra Madre Oriental to the west and east, respectively. A low east-west mountain range in the state of Zacatecas divides the plateau into northern and southern sections. These two sections, called the Mesa del Norte and Mesa Central, are now generally regarded by geographers as sections of one plateau. The Mexican Plateau is mostly covered by deserts and xeric shrublands, with pine-oak forests covering the surrounding mountain ranges and forming sky islands on some of the interior ranges. The Mexican Altiplano is one of six distinct physiographic sections of the Basin and Range Province, which in turn is part of the Intermontane Plateaus physiographic division. 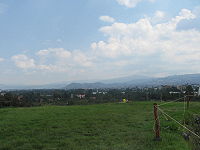 Valley of Mexico is the extreme southern part of the Mexican Plateau.