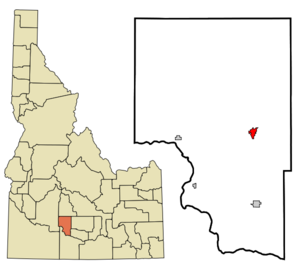 mapsize =
map_caption = Location in Gooding County and the state of

The city is named for , a local rancher who became a prominent political figure in Idaho in the early 20th Century, serving as both and a United States Senator. The original name of Gooding was Toponis.

Gooding is home to the Idaho School for the Deaf and the Blind.

The world's largest factory for barrel cheese, the raw product for , is located in Gooding. It has a capacity of 120,000 metric tons per year of barrel cheese and belongs to the group [ "Zuivelzicht" , ] .

There were 1,304 households out of which 31.3% had children under the age of 18 living with them, 50.5% were married couples living together, 9.7% had a female householder with no husband present, and 35.4% were non-families. 31.5% of all households were made up of individuals and 18.7% had someone living alone who was 65 years of age or older. The average household size was 2.47 and the average family size was 3.11.

There are five schools based in Gooding; four in the Gooding Joint School District and the Idaho School for the Deaf and the Blind. Petitions to build a charter school are in the legistlature. [ [http://www.magicvalley.com/articles/2007/11/15/news/local_state/124781.txt Times-News: Magicvalley.com, Twin Falls, ID ] ]

There are approximately 1300 students in the district.

Idaho School for the Deaf and the Blind

The Idaho School for the Deaf and the Blind, ISDB, was first established in 1906 in Boise and operated there until it burned down on December 8, 1908. The Idaho Legislature passed an act on March 16, 1909 establishing a permanent state school. Governor Frank Gooding donated land for the ISDB so it was moved to Gooding and started accepting students in September 1910. [ [http://www.isdb.idaho.gov/history.htm ISDB History ] ]

The school covers a 40 acre area and provides dormitories for many of its students and has other facilities, such as a gymnasium and park. [ [http://www.goodingidaho.org/Schools/schools.html Schools ] ] [ [http://www.isdb.idaho.gov/residential.htm Cottage Program ] ]

Because of the decline in enrollment the Idaho Legislature is considering moving the school to another location. [ [http://www.legislature.idaho.gov/ope/publications/reports/r0503.htm OPE Report 0503 ] ]