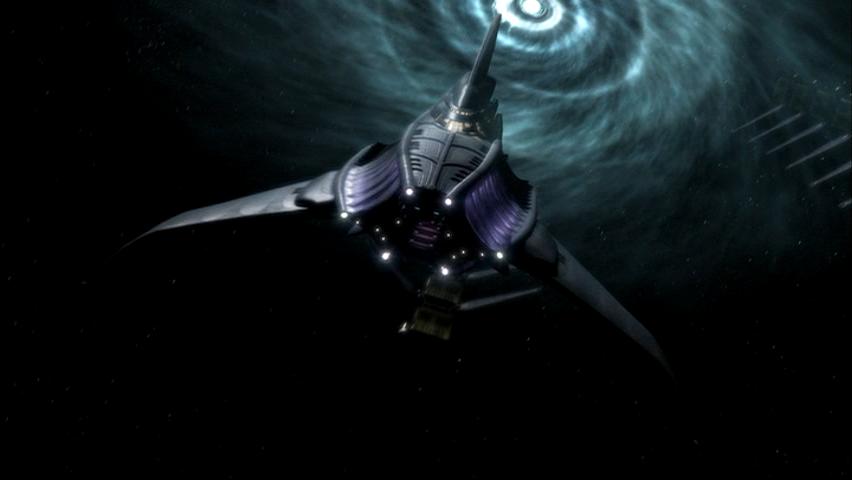 The Valen class cruiser is a class of in the fictional universe of the TV series Babylon 5 that is used by the Interstellar Alliance, a confederation-type affiliation of races including humanity and the , among others. There is some ambiguity concerning the use of this name in the sries, as there have been two distinct types of ship of this same name, which however are apparently different to the point of being two separate classes of starship.

The first Valen class cruiser is seen in the movie which reveals that it is a joint project between the and the Earth Alliance to create a ship for the Interstellar Alliance. This ship was apparently the only one of the type ever constructed. The discontinuation of the model line had several reasons. First, this was the first ever ship constructed as a blend of Earth and Minbari technology, and as such had many design flaws, not the last of which was its being rather ugly. One of the characters in the movie described the first Valen as an "ugly flying brick". Also, constant problems integrating the technology were mentioned.

Where design is concerned, the prototype certainly took more after its Earthforce heritage than the Minbari one. The ship consists of a main bulk with massive, short wings, and a long, straight, thick protrusion at the head of which the bridge is placed.The ship is approximately 1300 meters long (by comparison to the 160-meter ) doesn´t possess much in the way of maneuvering capabilities, complementing its lumbering appearance. Weapon systems are not known, but presumably included both Earth and Minbari weapons. Although this vessel wasn´t superior to the Minbari Sharlin class war cruiser, it held one primate in the Alliance: speed. Thanks to a combination of Earth advancements in ion propulsion and some of the Minbari magnetogravitic propulsion principles, it was, according to one of the movie´s protagonists, "the fastest ship in the Alliance". It is not known whether this included the Whitestars as well, because the Rangers (to whom all of the Whitestar fleet was reassigned after the Shadow war) operate in at least partial autonomy, answerable only to the Entil´zha.

The first Valen class vessel was destroyed on its maiden voyage when ferrying diplomats from applicant worlds to an IAS expansion summit. Under the command of the Ranger, Sindell, it was ambushed by warships belonging to the thralls of a mysterious, old and powerful alien race known as The Hand. They have been tipped off by a traitor, Minister Kafta from one of the applicant worlds, and so had succeeded in critically damaging the Valen before it ever had the chance to return fire.

The new Valen class cruiser is apparently also serving with the Interstellar Alliance. Being first seen several years after its predecessor had been destroyed, this vessel is a more mature product of cooperation between the Minbari and humans (both races having learned from the Victory project). Very little is known about the vessel, as it was only seen onscreen once, briefly. It incorporates technology that was left behind by the , following their departure from known space, namely, the ability to enter the quantumspace. This appears to be some kind of alternative to hyperspace and enables the ship to travel twice as fast, compared to the conventional hyperspace.

One has to ask, then, if the Vorlons had this ability all along, why were they still routinely using normal hyperspace, as was seen throughout the Babylon 5 series? As most of the other First Ones had their own special ways of at least entering hypespace, if not a different medium at all, it would be logical to assume the Vorlons did this for the benefit of the younger races, as they were known to have done many other things.

This craft appears to be somewhat smaller than its older namesake and most likely mass-produced. Its design also very strongly reflects the traditional approach to shipbuilding, as opposed to the Valen Mk.I. Please note that this, "not" the original Valen from the Legend of the Rangers, is the craft pictured at the head of this article.

* [http://b5tech.com/isa/valenn/valenn.html the first Valen class cruiser (from the Legend of the Rangers) at B5Tech.com]