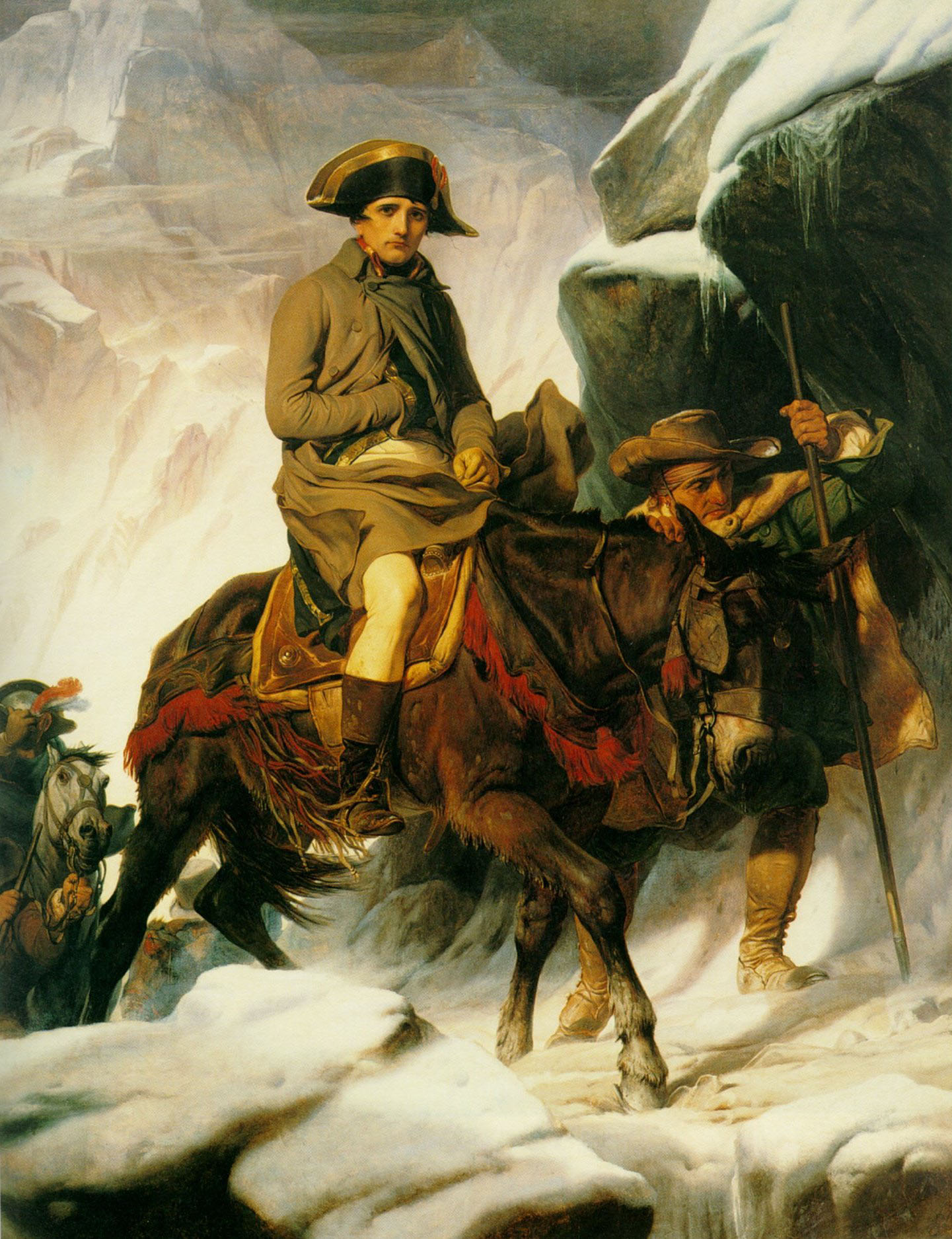 The work was inspired by Jacques-Louis David's series of five "" paintings (1801–1805). David's works also show Napoleon's journey through the , but there are significant stylistic differences between the two conceptions. Delaroche's Napoleon is cold and downcast, whereas David's wears a pristine uniform, and is idealized as a hero. Delaroche was commissioned to paint a realistic portrait; the style of which was emerging at the time.

While the painting largely represented&mdash;and was one of the pioneers of&mdash;an emerging style, the work was criticised by several authorities on the subject. The reasons for this varied from Delaroche's depiction of the scene to a general disapproval of Delaroche himself. Many of those who were in the latter state of mind felt that Delaroche was trying to match the genius of Napoleon in some way, and had failed miserably in doing so.

As part of his during the , Napoleon prepared to invade and conquer , which was at the time a province of the . [El-Enany, R.; Inc NetLibrary, p. 15] Such a military action promised numerous benefits, including securing French trade interests, and inhibiting British access to India. By the first of July that same year, Napoleon had landed on the shores of Egypt. [Clancy-Smith, J.A., p. 96] However, after a lengthy chain of conflicts that resulted in heavy casualties, the campaign resulted in an Ottoman-British victory, and Napoleon was forced to return to France.

When he arrived, he found that while he was in Egypt, n forces had retaken Italy. In order to regain the upper hand, he planned to launch a surprise assault on the Austrian army stationed in the . Based on the assumption that the Austrians would never expect Napoleon's large force to be able to traverse the Alps, he chose that as his route. He selected the shortest route through the Alps, the , which would enable him to reach his destination as quickly as possible. [Dodge, T.A. p.23] [Alison, Archibald p.26]

Delaroche's early works had been based on topics from the Bible's , but gradually his interests switched to painting scenes from English and French history.

The commissioning aside, Delaroche was inspired to create "Bonaparte Crossing the Alps" because he felt that he both looked like Napoleon, and that his achievements were comparable to Napoleon's. It is likely that Delaroche's painting is relatively historically accurate; details such as Napoleon's clothes appear to have been researched by Delaroche in an effort at authenticity.

The Liverpool painting was commissioned by Arthur George, Third Earl of Onslow, after Delaroche and George reportedly visited the in Paris, where they saw David's version of the famous event. It had only recently been re-hung in the museum after a resurgence of interest in Napoleon, nearly 40 years after he was exiled.ref label|exile|IV| Agreeing that the painting was unrealistic, George, who owned a sizable collection of Napoleonic paraphernalia, commissioned Delaroche to create a more realistic depiction..

The contrast between Jacques-Louis David's depiction of the same scene (of Napoleon traversing the Alps on his way to Italy), which was a flattering portrait that the king of Spain requested

Napoleon is seen wearing clothing appropriate for his location: over his uniform he wears a long topcoat which is wrapped firmly around him, in which he keeps his gloveless right hand warm. He retains a piece of his dignity in the gold-trimmed black he wears on his head. The mule Napoleon rides is undernourished, tired from its ordeal in struggling through the Alps. On the left of the mule is his guide, ,

Elements of the cold, harsh environment of the Alps are apparent: distant mountains capped in snow rise up behind Napoleon and his troupe, while a steep cliff face appears on his left, and the path underfoot has a thick layer of ice.More members of Napoleon's entourage can be seen slightly behind him, their robust figures accentuating Bonaparte's fragility.

Napoleon is shown to be as he would have been high up in the mountains, as a mortal and imperilled man. While this seems in some way demeaning to Napoleon's figure (and contrasts in the extreme with David's version, which shows Napoleon impervious to the cold, and in a heroic light), Delaroche's artwork was not intended to portray him in a hostile or unbecoming way. Delaroche wanted to depict Napoleon as a credible man, who suffered and underwent human hardship too, on his most daring exploits, and felt that making him appear as he really would have been in the situation would by no means debase or diminish Napoleon's iconic status or legacy, but rather make him a more admirable person.

Along with the mass of white seen behind Napoleon, the amber sunlight glow, originating from the West of Napoleon's troupe, is the central source of lighting in the painting. It introduces contrast when coupled with shadow, and, by illumination, highlights key aspects of the scene; this is particularly seen by the light that falls across Bonaparte's pigeon chest. Napoleon and the mule he is saddled on are richly d visually by the contrasting light and shade, as is the guide leading the mule. The ice and snow layers, also, are made whiter by the sunshine from the West, brightening the whole scene. However, the overhanging cliff on the left of Napoleon's guide and the legs of the mule both cast shadows to balance the lighting scheme of the painting.

The textural hues and schemes that Delaroche uses in this painting are quite detailed and well considered, especially in regards to the most important figures; such aspects of the work were described as being '...rendered with a fidelity that has not omitted the plait of a drapery, the shaggy texture of the four-footed animal, nor a detail of the harness on his back'.The mule, especially its fur, was intensely textured and detailed to make it look visually rough and bristly, and the mule itself weary and worn. The same techniques were applied to the red and yellow adornments draped and hung over the animal.The central detail of Napoleon is applied to his coat, in its ruffles and creases. Much detail and textural diversity is given to the guide too, most particularly to his face, his green, wind-caught tunic, and his leather boots.

Delaroche's attention to detail and literal precision in this painting evidences and demonstrates the slow but steady evolution of realism in art during the 19th century, and how its popularity began to rise.

Soon after its completion, the work was taken to England, and there, in 1850, it was reviewed by the critic of "the Atheneum",ref label|Atheneum|VI| a literary magazine.

Some were displeased with Delaroche's work at the time in general, and, in part, "Bonaparte Crossing the Alps", criticising what was described as his 'lowered standards in art'. Such critics included "", who wrote the following text about Delaroche:

* I Bonaparte chose to ride across the alps on a mule (obtained at a at ) ["The American Whig Review", p.456] rather than a steed, the typical gentleman's mount at the time, because the mule was considered to be more sure-footed on the slippery slopes and narrow passes of the Alps, and to be more sturdy and hardy while making such a perilous journey on such volatile terrain. [Clubbe, J., p.103]

* II Napoleon ordered the assemblage of over 5,000 artillery for transport through the pass, despite the fact that the pass was widely considered to be much too narrow, and the route too volatile and unstable, to allow any form of artillery, light or heavy, to come through. Thus, Napoleons military advisers warned him against this move, but he insisted on this presence of this great number of artillery. [Bunbury, H.E., p.61]

* IVThe painting was rehung as a result of the revival of Napoleon's reputation, and a fresh interest into his exploits. However, before this, in 1815, the year Napoleon was exiled, Napoleonic-themed art was proscribed for artists and painters, as he was not well liked because of events that had occurred in the few years immediately preceding 1815, and Napoleon's exile. It was only truly by the 1830s that artwork related to the emperor was being created once more. As such, after being removed from the walls of the Louvre around 1815, David's version had been re-hung by the time Delaroche observed it.

* VThe king of Spain (of the time) commissioned Jacques-Louis David's "Napoleon Crossing the Alps" as a friendly gesture towards Napoleon, hoping that the flattering gift would strengthen relationships between France and Spain, to the degree that Napoleon would not consider invading Spain and taking it over, after he became king. However, the king of Spain's attempt failed, and, soon after Napoleon crowned himself king, he crossed the and conquered Spain.

* VIThe "Athenæum" was a widely read literary magazine or periodical that was published in between 1828 and 1923. Published weekly,

* [http://www.wga.hu/art/d/delaroch/8delaroc.jpgZoomable image of the artwork]