Crouzon syndrome is a genetic disorder known as a branchial arch syndrome. Specifically, this syndrome affects the first branchial (or pharyngeal) arch, which is the precursor of the maxilla and mandible. Since the branchial arches are important developmental features in a growing embryo, disturbances in their development create lasting and widespread effects.

This syndrome is named after Octave Crouzon,[1][2] a French physician who first described this disorder. He noted the affected patients were a mother and her daughter, implying a genetic basis. First called "craniofacial dysostosis", the disorder was characterized by a number of clinical features. This syndrome is caused by a mutation in the fibroblast growth factor receptor II, located on chromosome 10.

Breaking down the name, "craniofacial" refers to the skull and face, and "dysostosis" refers to malformation of bone.

Associations with mutations in the genes of FGFR2[3] and FGFR3[4] have been identified.[5] [6]

Crouzon syndrome is autosomal dominant; children of a patient have a 50% chance of being affected.

As a result of the changes to the developing embryo, the symptoms are very pronounced features, especially in the face. Low-set ears are a typical characteristic, as in all of the disorders which are called branchial arch syndromes. The reason for this abnormality is that ears on a fetus are much lower than those on an adult. During normal development, the ears "travel" upward on the head; however, in Crouzon patients, this pattern of development is disrupted. Ear canal malformations are extremely common, generally resulting in some hearing loss. In particularly severe cases, Ménière's disease may occur.

The most notable characteristic of Crouzon syndrome is cranial synostosis, as described above, but it usually presents as brachycephaly, which results in the appearance of a short and broad head. Exophthalmos (bulging eyes due to shallow eye sockets after early fusion of surrounding bones), hypertelorism (greater than normal distance between the eyes), and psittichorhina (beak-like nose) are also symptoms. Additionally, a common occurrence is external strabismus, which can be thought of as opposite from the eye position found in Down syndrome. Lastly, hypoplastic maxilla (insufficient growth of the midface) results in relative mandibular prognathism (chin appears to protrude despite normal growth of mandible) and gives the effect of the patient having a concave face. Crouzon syndrome is also associated with PDA( patent ductus arteriosus) and aortic coarctation.

Incidence of Crouzon syndrome is currently estimated to occur in 1 out of every 25,000 people out of the general population.[citation needed] There is a greater frequency in families with a history of the disorder, but that doesn't mean that everyone in the family is affected (as referred to above). 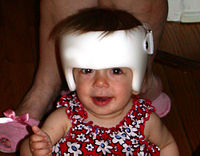 A child with Crouzon syndrome wearing a corrective cranial band.

Surgery is typically used to prevent the closure of sutures of the skull from damaging the brain's development. Without surgery, blindness and mental retardation are typical outcomes. Craniofacial surgery is a discipline of plastic surgery. To move the orbits forward, craniofacial surgeons expose the skull and orbits and reshape the bone. To treat the midface deficiency, craniofacial surgeons can move the lower orbit and midface bones forward For jaw surgery, either plastic surgeons or oral and maxillofacial (OMS) surgeons have experience to perform these operations. It is rare to wear a custom-fitted helmet (or cranial band) for several months after surgery as that is only for single-suture "strip craniectomy" repair. Crouzon patients tend to have multiple sutures involved, most specifically bilateral coronal craniosynostoses, therefore an open operation is used rather than the strip craniectomy with helmeting.

Once treated for the cranial vault symptoms, Crouzon patients generally go on to live a normal lifespan.

For dentists, this disorder is important to understand since many of the physical abnormalities are present in the head, and particularly the oral cavity. Common features are a narrow/high-arched palate, posterior bilateral crossbite, hypodontia (missing some teeth), and crowding of teeth. Due to maxillary hypoplasia, Crouzon patients generally have a considerable permanent underbite and subsequently cannot chew using their incisors. For this reason, Crouzon patients sometimes eat in an unusual way--eating fried chicken with a fork, for example, or breaking off pieces of a sandwich rather than taking a bite in it.