The League of Extraordinary Gentlemen, Volume I

The League of Extraordinary Gentlemen, Volume I

Supercbbox| title = The League of Extraordinary Gentlemen, Volume I 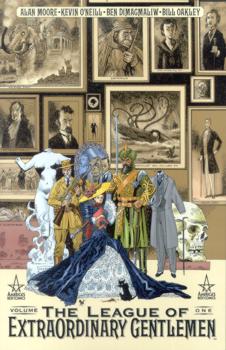 "The League of Extraordinary Gentlemen, Volume I" is a written by and illustrated by Kevin O'Neill, published under the imprint of . It is the first story in the larger "League of Extraordinary Gentlemen" series. The story takes place in in a fictional world where all of the characters and events from (and possibly the entirety of fiction) coexist. The world the characters inhabit is one more technologically advanced than our own was in the same era.

Miss Wilhelmina Murray is recruited by to assemble the League. Bond dispatches Murray to along with an unnamed sea captain (who is later revealed to be ). In , Murray finds , who has become an . The duo are forced to flee to the docks after Quatermain defends Murray from a group of s who attempt to rape her, killing two of their number. At the docks, Nemo emerges from the "Nautilus" and blasts the pursuing " rabble" with a large gun, rescuing Murray and Quatermain.

Their next assignment is to head to in order to rendezvous with (a detective from 's "") and capture a beast-man who transpires to be Dr. Jekyll/Mr. Hyde. He has been hiding in Paris after faking his own suicide, and preying on .

With Jekyll/Hyde successfully captured and handed over to , the remaining trio head to a girl's school in Edmonton, run by the sado-masochistic Miss Rosa Coote (from "The Pearl"). Rumours abound that many of the female pupils have become impregnated by the . After a single night's investigation, the trio discover that the "Holy Spirit" is none other than , the Invisible Man, who has been hiding since faking his own death. At the time of his capture, he is raping 's .

Issue 3: Mysteries of the East

The League is then convened at its headquarters in the "secret annexe" of the , where they are sent to recover a sample of from the clutches of (who is not mentioned by name for trademark reasons, but is instead identified by his pseudonym of "The Doctor").

According to Agent Bond, under the supervision of Professor Selwyn Cavor, Britain was secretly planning a moon landing to coincide with the turn-of-the-century celebrations. Cavorite is the key in powering and levitating heavier-than-air machines. However, the Doctor has stolen the cavorite, and may use it in his own efforts to gain revenge on the British Empire.

While Nemo decides to remain on board his submarine, the remaining quartet are dispatched to London's district in order to discover more about the Chinese "devil-doctor". Murray and Griffin learn from an informant named Quong Lee (a storyteller from books by Thomas Burke) that Fu Manchu is indeed operating within the area and is planning something big; however, Lee only gives them information in the form of a cryptic , stating, "The waters lap beneath the heavenly bridge. The sleeps below it. My advice to you: do not awaken it." Although Griffin is skeptical, Murray concludes that Manchu's activities must be taking place beneath Rotherhithe Bridge.

Meanwhile, Quatermain and Jekyll enter Manchu's lair, and Quatermain spots the doctor applying caustic paint to one of his victims. The duo are almost uncovered as spies, but they manage to escape.

Back on board the "Nautilus", the League convenes once more and Murray organises the evidence. She believes Manchu has stolen the cavorite for some nefarious purpose, and states that there is an uncompleted tunnel beneath Rotherhithe Bridge, which would be a perfect place for him to craft some form of aerial war machine undiscovered. Four of the group plan to infiltrate his lair and steal back the cavorite, with Nemo remaining on board the "Nautilus".

It is Quatermain and Murray who first manage to infiltrate the Doctor's lair, and they discover a gigantic flying craft, heavily armed with guns and cannons (the "dragon" of Quong Lee's riddle). Although they are discovered by a guard, an unnoticed Griffin is able to kill the guard and Quatermain takes his uniform, allowing him a disguise so that he might get inside the Dragon and steal back the cavorite.

Griffin heads back outside to fetch Jekyll in the hopes of creating a diversion. Once inside one of the entrances, Griffin infuriates Jekyll to such a degree that he becomes Hyde and begins slaughtering Manchu's henchmen.

Having stolen the cavorite, Murray and Quatermain are re-united with Hyde and Griffin in an underwater glass tunnel, and although they lock themselves in they realise it will only be a matter of time before Manchu's men burst in and kill them. To escape, Hyde grabs Quatermain and Murray, with Griffin holding onto his neck. Quatermain blasts a hole in the glass roof with his and Murray activates the cavorite, propelling the group upwards through the cascading water. Manchu's base is flooded, the Dragon is destroyed, and the "Nautilus" rescues the group as they fall back down into the .

Bond congratulates the group on their success, and leaves the "Nautilus" with the cavorite, telling them he will take it back to his superior M (another parallel to the James Bond mythos). However, Griffin is oddly absent from the group, having disguised a load of brooms as himself, using his own bandages, spectacles and clothing. He follows Bond back to the Military Intelligence Headquarters, and discovers that M is in fact , the arch-nemesis of - note how this scene manages to subtly make another reference to 007, as both "James" (Moriarty) and "Bond" (Campion) appear in "M"'s office, discussing an evil genius's plans to threaten England.

Moriarty has constructed his own aerial war machine, and with the cavorite he can now put it into action. Griffin returns to the "Nautilus" and informs the group of what he's discovered. Nemo realises that M is Moriarty, and that he plans to bomb London's east end, destroying what is left of Manchu's criminal empire.

After Murray and Quartermain try futilely to prevent Moriarty from launching his ship, and have a run in with from ' "", the League embark aboard the "Victoria", a on Nemo's ship that was once owned by 's "'s" Samuel Ferguson, and board Moriarty's ship.

Issue 6: The Day of Be-With-Us

Hyde and Nemo launch an attack on the crew (Nemo using a , Hyde using his fists), while Murray and Quatermain ascend to the top deck where Moriarty is waiting (Griffin has cowardly stripped and remains by the balloon, which is still anchored to the ship). Quatermain guns down Moriarty's guards using his own machine gun; however, the Professor disarms him and prepares to kill him. Murray smashes the case containing the cavorite and Moriarty rushes toward the device, grabs onto it, and is propelled into the night sky. The League leave the ship via the balloon, and once again are rescued by the "Nautilus", this time manned by Nemo's Ishmael (the narrator from 's "Moby-Dick").

The series ends with congratulating the League for their work, telling them to remain in London should there be additional need for them in the future. The comic ends with the scene of Martian ships falling towards , and sets in motion the second volume.

The book version of Volume One also includes a short illustrated prose prequel called "", which features Allan Quatermain, John Carter, 's , and the Time Traveller from ' "". This prequel was originally published, serially, at the back of the six individual issues of the comic.

Also at the back of Volume One are several extras, including the covers of all issues contained in the volume. Also included is a "paint by numbers" drawing attributed to Basil Hallward, who was the painter of the eponymous "" in the novel. A second version is seen two pages later, coloured, and clearly intended to be the portrait towards the end of the novel when Gray's painted visage has become decrepit and horrid, thus reflecting Gray's personality. The blurb about the paint-by-numbers drawing mentions Hallward's mysterious disappearance, which is a reference to a part of the novel where Dorian Gray, upset that Hallward found out about the fate of his artwork, kills Hallward and has a friend dispose of the body, leaving no trace of evidence. The blurb for the second version of the drawing also mentions failed attempts at a cabinet-making kit by Caligari, which is a reference to the old horror film "".

A painting of Nemo's submarine, the "Nautilus", in the background of the cover of volume one also bears Hallward's signature.

Issue #5 contained an authentic vintage advertisement for a Marvel-brand . is DC's chief rival within the comics industry and Moore had had a public dispute with Marvel, his former employer. This ad caused DC executive to order the entire print run destroyed and reprinted with the offending advertisement edited.

In a later title, Moore creates a "Miracle Douche Recall" headline on a newspaper, which is not only a reference to the furor, but is also a reference to the Marvelman, when Marvel Comics had previously forced , which was written by Alan Moore, to change its name to Miracleman, despite Marvelman having been around for 40 years.

' annotations for this volume are available in a book entitled "Heroes & Monsters: The Unofficial Companion to the League of Extraordinary Gentlemen" and features;

* Annotations to the League of Extraordinary Gentlemen, revised and expanded from the versions previously available online.
* Essays by Nevins on the history of the "Yellow Peril" archetype, pivotal to the first LOEG miniseries; on the origin of the "crossover" concept and team-ups in fiction; and on the Victorian character archetypes present in the LOEG miniseries.
* Biographies of the main characters in the LOEG miniseries
* Biographies of the authors whose creations are featured in the LOEG series.
* Interviews with and commentary by the creators of the LOEG
* And, last but not least, an introduction by Alan Moore