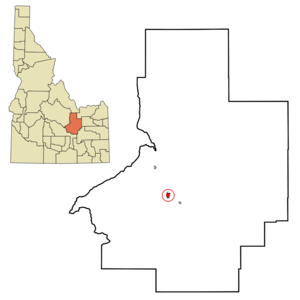 mapsize =
map_caption = Location in Butte County and the state of

Craters of the Moon National Monument is located near Arco along .The (INL) is located east of Arco. Arco is located along the Big Lost River and is a gateway to the Lost River Valley.

In 1901, the town, then known as Root Hog, moved its borders to place the town at the intersection of two stagecoach routes that crossed Idaho. The town leaders applied to the U.S. Post Office for the town name of "Junction."

The Postmaster General thought the name too common and suggested that the place be named Arco for (1869-1940) of Germany who was visiting Washington, D.C. at the time. Georg von Arco was an inventor and a pioneer in the field of radio transmission and would become the lead engineer of , a German company founded in 1903 that produced s.

Arco was the first community in the world ever to be lit by electricity generated by . This occurred on , , powered by a reactor (see "") at the nearby "National Reactor Testing Station" (NRTS), which is now the Idaho National Laboratory. This reactor made further history when it became the site of the first fatal nuclear accident on January 3, 1961, when the reactor melted down (for references see ).

According to the , the city has a total area of convert|0.9|sqmi|km2|abbr=on, all of it land.

In town, the most striking physical feature is Number Hill, a rocky hill with numbers painted all over it. has a tradition of each class since 1920 painting its graduation year on the face of hill.

There were 427 households out of which 29.3% had children under the age of 18 living with them, 48.2% were married couples living together, 11.9% had a female householder with no husband present, and 37.0% were non-families. 34.0% of all households were made up of individuals and 15.2% had someone living alone who was 65 years of age or older. The average household size was 2.35 and the average family size was 3.04.

* [http://www.tourofidaho.com Arco is on the Tour of Idaho route]