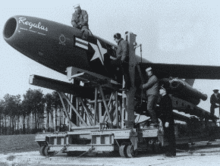 The SSM-N-8 Regulus cruise missile was used for one attempt to deliver mail.

Rocket mail is the delivery of mail by rocket or missile. The rocket would land by deploying an internal parachute upon arrival. It has been attempted by various organizations in many different countries, with varying levels of success. It has never become widely seen as being a viable option for delivering mail, due to the cost of the schemes and numerous failures.

The collection of philatelic material ("stamps") used for (and depicting) rocket mail is a specialist branch of aerophilately known as astrophilately.

Friedrich Schmiedl launched the first rocket mail (V-7, Experimental Rocket 7) with 102 pieces of mail between Schöckl and St. Radegund, Austria. Schmiedl also launched rockets on 21 April 1931 from the Austrian town of Schöckl to Kaite Rinne with mail and a spectrograph. After the April flight, 79 specially printed postcards marked in German with "Flown in Instrument Rocket" bear stamps from the flights.[1]

Gerhard Zucker experimented in the 1930s with powder rockets similar to fireworks. Between 1931 and 1933, he travelled throughout Germany displaying his rocket and claiming that it could be used to deliver mail. After moving to the United Kingdom, Zucker attempted to convince the General Post Office that postal delivery by rocket was viable. After initial demonstrations on the Sussex Downs in southern England, rockets were launched on 28 and 31 July 1934 over a 1600-metre flight path between the Hebridean islands of Harris and Scarp in Scotland. Around 1.07 m long with a diameter of 18 cm, the fuselage was packed with 1,200 envelopes.[2] Unfortunately for Zucker both rockets exploded, though most of the smaller second cargo, which included survivors of the first, was saved.[3][4]

Stephen Smith, a Secretary of the Indian Airmail Society, combined his work with his interest in rocketry. His first launch was on 30 September 1934, and he experimented with 270 more by 4 December 1944. 80 of these contained mail, and his achievements include the first successful rocket mail sent over a river and the first rocket to carry a parcel. The Oriental Fireworks Company supplied Smith with 16 rockets between 23 March 1935 and 29 June 1935. Between them, these "Silver Jubilee" flights carried over a thousand covers.

In 1992 the Indian government issued a stamp to celebrate the centenary of Smith's birth, calling him "the originator of rocket mail in India".[5][6]

The first successful delivery of mail by a rocket in the United States was made on 23 February 1936, when two rockets that were launched from the New Jersey shore of Greenwood Lake landed on the New York shore, some 300 metres away.[7][8]

In 1959 the U.S. Navy submarine USS Barbero assisted the Post Office Department, predecessor to the United States Postal Service (USPS) in its search for faster mail transportation with the only delivery of "Missile Mail". On 8 June 1959, Barbero fired a Regulus cruise missile — its nuclear warhead having earlier been replaced by two Post Office Department mail containers — at the Naval Auxiliary Air Station in Mayport, Florida. Twenty-two minutes later, the missile struck its target. The Regulus cruise missile was launched with a pair of Aerojet-General 3KS-33,000 [3 sec duration, 33,000 lbf (150 kN) thrust] solid-propellant boosters. A turbojet engine sustained the long-range cruise flight after the boosters were dropped.

The USPS had officially established a branch post office on Barbero and delivered some 3000 pieces of mail to it before Barbero left Norfolk, Virginia. The mail consisted entirely of commemorative postal covers addressed to President of the United States Dwight Eisenhower, other government officials, the Postmasters General of all members of the Universal Postal Union, and so on. They contained letters from United States Postmaster General Arthur E. Summerfield. Their postage (four cents domestic, eight cents international) had been cancelled "USS Barbero Jun 8 9.30am 1959" before the boat put to sea. In Mayport, the Regulus was opened and the mail forwarded to the post office in Jacksonville, Florida, for sorting and routing.

Upon witnessing the missile's landing, Summerfield stated, "This peacetime employment of a guided missile for the important and practical purpose of carrying mail, is the first known official use of missiles by any Post Office Department of any nation."[9] Summerfield proclaimed the event to be "of historic significance to the peoples of the entire world",[10] and predicted that "before man reaches the moon, mail will be delivered within hours from New York to California, to Britain, to India or Australia by guided missiles. We stand on the threshold of rocket mail."[11]

Notwithstanding the Postmaster General's enthusiasm, in reality the Department of Defense saw the measure more as a demonstration of U.S. missile capabilities. Experts believe that the cost of using missile mail could never be justified.[12]

Since the end of the Cold War, Russia has made a few experimental rocket mail launches from nuclear submarines in the Sea of Okhotsk toward western Russia, using now-surplus missiles.[citation needed]

Technologists like Robert Zubrin, of Mars Society fame, think that rocket mail, or at least ultra-elite business package delivery, may become commercially viable with the development of fully reusable launch systems, particularly single-stage to orbit vehicles. Such systems would allow package delivery anywhere in the world in 30–45 minutes. This idea has been forwarded by Zubrin and was the original business plan behind Pioneer Rocketplane (now Rocketplane Limited, Inc.), which he co-founded. Zubrin has since left the company, which is now focused on pursuing a somewhat more conventional space tourism strategy. The potential of package delivery with reusable launch vehicles is discussed in Zubrin's book Entering Space.[13]

On 3 December 2005, XCOR Aerospace flew its EZ-Rocket (a rocket-powered Long-EZ aircraft the company built as a demonstrator for its reusable rocket engines) from Mojave, California to California City, California, both in Kern County. Test pilot Dick Rutan made the flight which lasted about 9 minutes and carried US mail from the post office in Mojave to addresses in California City onboard. This was the first time that a manned, rocket-powered aircraft was used to carry US Mail.[14]

During the mid-1950s, "amateur" rocketeers flew a number of zinc dust / sulfur "micrograin" solid propellant mail-carrying rockets interstate, from California, across the Colorado River, and into Arizona. The postal covers were printed for each occasion, and franked at the nearest destination post office.

Mail is delivered by rocket in an early chapter of Gravity's Rainbow by Thomas Pynchon. Specifically, Roger Mexico receives orders from A.C.H.T.U.N.G. this way.

Ethan Hunt's computerized sunglasses (for a mission briefing) are delivered by a missile with a ground-piercing spike on the nose, fired from a shoulder-mounted tube, at the start of the John Woo film Mission: Impossible II.

Bill Bryson mentions missile mail in his 2006 memoir The Life and Times of the Thunderbolt Kid.