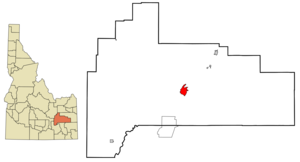 Blackfoot is a city in Bingham County, , . The population was 10,419 at the 2000 census. The city is the of Bingham County.GR|6 Blackfoot is designated the "Potato Capital of the World", because it has the largest industry in the world.fact|date=April 2007 It is home to the (a museum and gift shop that displays and explains the history of Idaho's potato industry), which is home to the world's largest and potato chip. Blackfoot is also home to the , which operates between weekend and the following weekend.

Blackfoot is the principal city of the Blackfoot, ID Micropolitan Statistical Area, which includes Bingham County.

"Blackfoot" is a name applied to several places in the area, including a mountain range and a small river. The name for the area can be traced back to the summer of when a group of trappers and traders from the passed through. Earlier, in , there had been some s, and people who walked through the burned areas got their moccasins all black. While there were no actual people in the area, the traders referred to the people they met in the area as the Indians with the black feet, or the "Blackfoot Crowd", because of the blackened footwear. They went on to call the nearby stream the Blackfoot River and so forth.

, which speculation paid off four years later. October 10, 1878 a post office was established with Theo T. Danilson as Postmaster. November 10, 1878 track was laid through town, with the track running right up behind the Stevens Store to take advantage of the store's loading platform (which was originally used to unload freight wagons). The name of the town was changed to Blackfoot March 20, 1879.

On January 13, 1885 Bingham County was established with Blackfoot as its county seat. Originally the county seat was to be Eagle Rock (now called Idaho Falls). However, the night before its final passage men from Blackfoot bribed a clerk to erase Eagle Rock and write in Blackfoot. The measure went through without opposition and was signed by the governor. ["Bingham County History, Written and Compiled by the People of Bingham County". Taylor Publishing Company. 1985. Library of Congress number 85072293]

Blackfoot was incorporated as a town in 1907

There were 3,685 households out of which 38.8% had children under the age of 18 living with them, 56.9% were married couples living together, 11.8% had a female householder with no husband present, and 27.2% were non-families. 23.7% of all households were made up of individuals and 10.7% had someone living alone who was 65 years of age or older. The average household size was 2.75 and the average family size was 3.27.