Operation Hailstone (known in Japan as Japanese: トラック島空襲 Torakku-tō Kūshū, lit. "the airstrike on Truk Island") was a massive naval air and surface attack launched on February 17–18, 1944, during World War II by the United States Navy against the Japanese naval and air base at Truk in the Caroline Islands, a pre-war Japanese territory.

Truk was a major Japanese logistical base as well as the operating "home" base for the Imperial Japanese Navy's Combined Fleet. Some have described it as the Japanese equivalent of the US Navy's Pearl Harbor. The atoll was the only major Japanese airbase within range of the Marshall Islands and was a significant source of support for Japanese garrisons located on islands and atolls throughout the central and south Pacific. The base was the key logistical and operational hub supporting Japan's perimeter defenses in the central and south Pacific.

Fearing that the base was becoming too vulnerable, the Japanese had relocated the aircraft carriers, battleships, and heavy cruisers of the Combined Fleet to Palau a week earlier. However, numerous smaller warships and merchant ships remained in and around the anchorage and several hundred aircraft were stationed at the atoll's airfields. 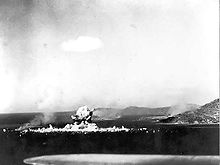 Japanese Ammunition ship Aikoku Maru blowing up; the air crew which dropped the bomb were missing and believed to have been caught in the explosion February 17, 1944

The U.S. attack involved a combination of airstrikes, surface ship actions, and submarine attacks over two days and appeared to take the Japanese completely by surprise. Several daylight, along with nighttime, airstrikes employed fighters, dive bombers, and torpedo aircraft in attacks on Japanese airfields, aircraft, shore installations, and ships in and around the Truk anchorage. A force of U.S. surface ships and submarines guarded possible exit routes from the island's anchorage to attack any Japanese ships that tried to escape from the airstrikes.

In total the attack sank three Japanese light cruisers (Agano, Katori, and Naka), four destroyers (Oite, Fumizuki, Maikaze, and Tachikaze), three auxiliary cruisers (Akagi Maru, Aikoku Maru, Kiyosumi Maru), two submarine tenders (Heian Maru, Rio de Janeiro Maru), three other smaller warships (including submarine chasers Ch-24 and Shonan Maru 15), aircraft transport Fujikawa Maru, and 32 merchant ships. Some of the ships were destroyed in the anchorage and some in the area surrounding Truk lagoon. Many of the merchant ships were loaded with reinforcements and supplies for Japanese garrisons in the central Pacific area. Very few of the troops aboard the sunken ships survived and little of their cargoes were recovered. (Lindeman, 2005)

Maikaze, along with several support ships, was sunk by U.S. surface ships while trying to escape from the Truk anchorage. The survivors of the sunken Japanese ships reportedly refused rescue efforts by the U.S. ships.[2][page needed] The cruiser Agano, a veteran of the Raid on Rabaul and which was already en-route to Japan when the attack began, was sunk by a U.S. submarine, the USS Skate. Oite rescued 523 survivors from the Agano and returned to Truk lagoon to assist in its defense with her anti-aircraft guns. She was sunk soon after by air attack with the Agano survivors still on board, killing all of them and all but 20 of the Oite's crew.

The U.S. lost twenty-five aircraft, mainly due to the intense anti-aircraft fire from Truk's defenses. About 16 U.S. aircrew were rescued by submarine or amphibious aircraft (several Japanese, whose crew took them prisoner).[3] A nighttime torpedo attack by a Japanese aircraft from either Rabaul or Saipan damaged the Intrepid and killed 11 of her crew, forcing her to return to Pearl Harbor and later, San Francisco for repairs. She returned to duty in June, 1944. Another Japanese air attack slightly damaged the battleship USS Iowa with a bomb hit.[2][page needed]

An aerial view of the airstrike at Truk can be seen in the U.S. Navy film The Fighting Lady.

In his autobiography Baa Baa Black Sheep, U.S. Marine Corps ace pilot Gregory "Pappy" Boyington describes his experience as a prisoner of war on the ground at Truk during the raid.

The attacks for the most part ended Truk as a major threat to Allied operations in the central Pacific; the Japanese garrison on Eniwetok was denied any realistic hope of reinforcement and support during the invasion that began on February 18, 1944, greatly assisting U.S. forces in their conquest of that island.

The Japanese later relocated about 100 of their remaining aircraft from Rabaul to Truk. These aircraft were attacked by U.S. carrier forces in another attack on April 29–30, 1944 which destroyed most of them. The U.S. aircraft dropped 92 bombs over a 29 minute period to destroy the Japanese planes. The April 1944 strikes found no shipping in Truk lagoon and were the last major attacks on Truk during the war.

Truk was isolated by Allied (primarily U.S.) forces as they continued their advance towards Japan by invading other Pacific islands such as Guam, Saipan, Palau, and Iwo Jima. Cut off, the Japanese forces on Truk, like on other central Pacific islands, ran low on food and faced starvation before Japan surrendered in August 1945. (Stewart, 1986)