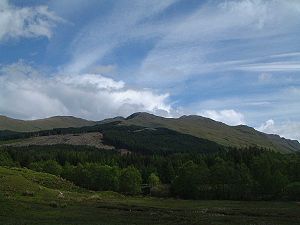 Cruach Ardrain from the A82 road in Glen Falloch. The plantations on the NW ridge are being felled.

Cruach Ardrain is a Munro mountain located in the southern highlands of Scotland in the Stirling Council area, five kilometres south east of Crianlarich.

Cruach Ardrain is clearly delineated to the west by the upper valley of the River Falloch (Coire Earb) and to the east by the Benmore and Inverlochlarig glens and is one of the more distinctive of the group of mountains that stand in Glen Falloch. It has a fine pointed outline and is a well seen from the village of Crianlarich with which it is closely associated. A popular horseshoe ridge walk taking in the mountain starts and finishes in the village. Cruach Ardrain is Y shaped and reaches a height of 1046 metres (3432 feet). The hills name originate from the Gaelic language and its exact meaning is vague and has various translations into English. One popular version being “The High Heap”[1] however Cruach more usually means a stack, giving an alternative translation of “Stack of the High Part”.[2] The name has also been translated in guide books as “High Mound”[3] and “High Slopes”.[4]

Cruach Ardrain’s Y shape is formed by three ridges which go north, north west and south. The southern ridge links to the adjoining Munro of Beinn Tulaichean which lies two kilometres away across a high col with a height of 825 metres. Cruach Ardrain and Beinn Tulaichean are often climbed together in the same walk. A spur goes south west off the south ridge to the subsidiary top of Stob Glas (815 metres) before continuing to link with the Munro of Beinn a' Chroin, however care is needed as Stob Glas is steep and rocky. The north and north east ridges encircle the extensive Coire Ardrain which is rocky at its head and forested on its lower slopes.

The head of Coire Ardrain contains the Y Gully, a scramblers route which leads directly to the summit and gives a fine ice climb (grade 1) in winter. Y Gully made the mountain popular with the early pioneers who enjoyed a challenging route to any summit.[5] Another well known ice climb on the mountain is Hollow Gully which is located on the rocky spur of Stob Glas (c.820 metres) which lies one km south-southwest of the main summit.[6]

Cruach Ardrain has one Munro “Top” located on its slopes, this is Stob Garbh (Rough Peak) with a height of 959 metres and is situated on the northern ridge, a kilometre from the main summit.[7] Stob Garbh lives up to its name, it is rocky and needs care when being traversed. It can be by-passed on the west side but the path is steep and slippery and it is best to stick to the path over the crest. The north west ridge has two intermediate heights on it Meall Dhamh (814 metres) and Grey Heights (686 metres) before it drops steeply to Glen Falloch, these lower slope are conifer planted although some felling is taking place.

In May 1892 Scottish Mountaineer William W. Naismith devised Naismith's Rule while walking over Cruach Ardrain on the way to the neighbouring mountain of Ben More. The rule is a simple formula for estimating walking time taking into account not just distance but also height to be ascended.[8]

The summit of Cruach Ardrain has two high points with virtually the same height, roughly 250 metres apart. The north east top has an elevation of 1046 metres while the south west top has a height of 1045 metres. Sir Hugh Munro declared the NE Top to be the official summit in the Munro Tables of 1891, however in 1921 the SW top was recognised as the true summit of the mountain due to mapping irregularities. This was reversed in 1981 when new mapping techniques confirmed the NE Top as the highest point.[9] The two high points are separated by a shallow depression with the true summit having a large cairn.

The most popular ascent of Cruach Ardrain starts at Crianlarich and uses the north and north west ridges as means of ascent and descent. The north ridge is often recommended for ascent as it gives an exhilarating scramble over the “Top” of Stob Garbh, leaving the north west ridge for descent. The plantations at the foot of the NW ridge can be awkward for walkers although “breaks” in the forest do exist. An approach to the mountain from the south is possible from Inverlochlarig at grid reference NN445184 although this route is mostly walking on grassy slopes. Most walkers who attain the summit of Cruach Ardrain will continue on to the Munro of Beinn Tulaichean which is just an easy stroll away with only just over 100 metres of ascent.