The three spot gourami, Trichopodus trichopterus, (formerly Trichogaster trichopterus [1][2]) is a labyrinth fish. The natural coloration of this fish gets its name from the two spots along each side of its body in line with the eye, considered the third spot.[3] Marketed fresh or salted and pickled, they are also popular in the fishkeeping hobby, commonly kept in aquariums.[4] Depending on the various artificial color morphs, the species may be known under other common names including the blue gourami, Cosby gourami, gold gourami, and the opaline gourami.[4]

Three spot gourami are endemic to the Mekong basin in Cambodia, Laos, Thailand and Vietnam and Yunnan in southeast Asia.[4] These fish live in marshes, swamps, canals, and lowland wetlands. They migrate during the flood season from permanent water bodies to flooded areas, such as seasonally flooded forests in the middle and lower Mekong. During the dry season, they will return to these permanent water bodies.[4] These fish feed on zooplankton, crustaceans and insect larvae.[4] The male builds a bubble nest for the eggs, which he protects aggressively.[5]

The Three spot gourami is a hardy fish.[5] This species can be housed with a variety of tank mates that are of similar size and temperament. While males can be territorial with each other, they become timid around other, more aggressive fish.[5] The ideal tank set-up would be an aquarium of a minimum of 150 litres (33 imp gal; 40 US gal) and have plenty of live plants as well as rocks and driftwood for use as hiding places.[citation needed]

Male gouramis are known to be very aggressive; they may also be fin nippers and generally may bother other fish in the tank. They will often show aggression toward species with long, flowing fins like male guppies, goldfish and bettas, because they display a long tail and bright colors, presenting competition for impressing a female gourami. Female gouramis sometimes bother other fish but usually keep to themselves.

The Three spot gourami is an omnivore and requires both algae-based foods as well as meaty foods. An algae-based flake food, along with freeze-dried bloodworms, tubifex worms, and brine shrimp will provide these fish with the proper nutrition. Live foods such as mosquito larvae and daphnia are also beneficial. The average weight of a blue gourami is 50–100 grams (1.8–3.5 oz).[citation needed]

The best way to differentiate between the male and female Three spot gourami is by the dorsal fin. In the male, the dorsal fin is long pointed and the anal fin is pointed, while the female's are shorter and rounded. However, some females may have a dorsal fin as long as the male's. [5] For breeding, the temperature should be above 26 °C (79 °F).[3] When ready to breed, the male builds a bubble nest and then begins to entice the female by swimming back and forth, flaring his fins and raising his tail. When this behavior is noticed, the water level should be reduced to 15 centimetres (5.9 in). The depth is not extremely important as it is in other labyrinth fish.[3] The female may lay up to 700 to 800 eggs.[3] After spawning the female should be removed to a separate aquarium as the male may become aggressive toward her. The male protects the eggs and fry, but should be removed after they become free-swimming.[3] After hatching, there should be frequent water changes, especially during the third week, as this is when the labyrinth organ is developing. The fry should be fed infusoria and brine shrimp nauplii.[citation needed]

Opaline gouramis are known to change colour (their blue spots will fade) when under high stress situations or when they are not kept under good conditions. A healthy blue gourami should have two vivid blue spots on each side of the body. Also, their spots will fade with age. 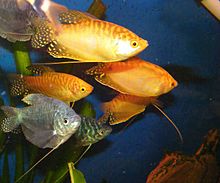