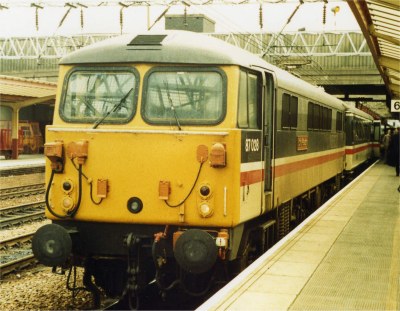 roadnumber = 87001–87035, 87101
axleloadclass = 6The Class 87 is a type of built from 1973-75 by British Rail Engineering Limited (BREL). 36 of these locomotives were built to work passenger services over the (WCML). They were the flagships of British Rail's electric locomotive fleet until the late 1980s, when the Class 90s started to come onstream. The privatisation of British Rail saw all but one of the fleet transferred to ; they continued their duties until the advent of the new Pendolino trains, when they were transferred to other operators or withdrawn. The last Class 87 in UK mainline use was withdrawn from service on .

A requirement for more electric locomotives came about after the electrification of the WCML spread north from to , and . Initially, three Class 86 locomotives were used as test-beds to trial equipment (mainly electrical equipment and suspension) that would be used in the new locomotives; effectively, these locomotives were Class 87s in everything but appearance.

The external design of the Class 87 was clearly derived from that of the Class 86; the only major detail differences were two front cab windows on the 87 instead of the three of the 86, and also the lack of headcode indicator boxes; by 1973, visual recognition of train reporting numbers by signallers was no longer necessary. The 87s were also fitted with multiple working equipment which enabled locomotives to work with other members of the class (and some Class 86s) while controlled by one driver.

In the 1980s, the multiple working system was replaced with a new system based on (TDM) allowing 87s to work with other classes of locomotive (including most 86s, 90s and 91s) and most importantly, s (DVTs).

Whilst the first 35 locomotives (numbered from 87001 to 87035, and known as Class 87/0) were identical, the 36th was numbered 87101 and had major equipment differences from the rest of the class. While the 87/0s were fitted with a traditional tap-changer transformer and , 87101 had a new thyristor power control system, and spent over a year on test before entering service in 1976. [ [http://www.aclocogroup.co.uk/index.php?page=history87.php Class 87 history] AC Locomotive Group - Retrieved on ] The locomotive, named "Stephenson", worked the same services as the standard locomotives for many years, until British Rail was sectorised in the 1980s.

The great majority of the Class 87s' workload came on express passenger services between and , and on the WCML. They did, however, see some use on freight, especially on heavy services that required two locomotives. In the late 1970s, British Rail named its entire Class 87 fleet, many receiving names previously carried by the "Britannia" s. The rest were named after towns, cities or counties along the WCML. In the 1980s, British Rail locomotives were allocated to separate sectors and the 87/0s were transferred to InterCity (which meant their freight work largely came to an end), whilst 87101 went to work for .

In 1997 took over the WCML franchise from British Rail. All 35 Class 87/0 locomotives passed to the rolling stock company and were leased to Virgin as part of the deal. The locomotives continued to work the same services as before, the only outward indication of the change of ownership being the repainting of the locomotives in the red Virgin Trains livery. However, the Virgin policy of introducing a new fleet of trains inevitably meant that the writing was on the wall for the 87s. In 2003, No.87005 "City Of London" was the first locomotive taken out of service, and although withdrawals were slower than expected due to the unreliability of the Pendolinos, the final day in service was set for , by which time many locomotives had been withdrawn, and others transferred to other operators. On this day, four locomotives hauled special trains to , and Manchester. However, this turned out not to be the final workings for Virgin, as further problems with the new trains meant sporadic appearances by Class 87s hired from other operators. The final working, between London and Birmingham, eventually occurred on .

inherited the unique No.87101 from . The locomotive was used infrequently on freight and charter trains but suffered a major failure in 1999 and was withdrawn due to its non-standard nature. It was eventually sold to for spare parts, and finally scrapped at Barrow Hill by in 2002.

In April 2005, acquired three locomotives, all of which had been out of service for a number of months. The fleet later grew to eight, and were intended to work charter trains, for spot-hire contracts and a new possible intermodal traffic flow. They were based at Oxley depot in . However the fleet saw very little use, and in July 2006 the locomotives went off-lease. Cotswold Rail no longer operates AC electric locomotives.

In November 2004, (DRS) acquired four locomotives. They were used on Anglo-Scottish intermodal services, but never on a regular basis. In June 2005, the four locomotives were stored. The main reason for their lack of use was the need for a diesel to shunt the train in non-electrified sidings.

In November 2004, acquired two locomotives which had recently been retired from Virgin passenger service. They were used as standby locomotives to rescue failed Class 325 units working FirstGBRf parcels trains. The fleet increased to four at one point, but finally consisted of two locomotives, No.87022 "Cock O' The North", and No.87028 "Lord President", which were both withdrawn at the end of 2007. What was to have been their final working, a charter train on 29 December 2007, was cancelled.

In 2006, Nos.87012 and 87019 were sold to an operator in , although the transfer did not take place until after Bulgaria's accession to the , in order to minimise customs formalities. Following trials, 25 further locomotives (the entire fleet, minus five that have been scrapped, the two already in and the four locomotives preserved or staying in the UK) were sold to the Bulgarian Railway Company and will be exported in stages during 2008-2009. [ [http://www.thejunction.org.uk/cl87.html Class 87] The junction.org, retrieved on ] The first batch, locos 87007, 87008 and 87026, prepared by Electric Traction Servces Limited, left the UK in June 2008. [ [http://www.electric-traction-services.co.uk/news.php#87_livery First three 87s almost ready] Electric Traction Services Limited, retrieved on ]

*87031 "Hal o' The Wynd" is preserved for use in an engineering training scheme, which may be a temporary state of affairs. It is located at in Birmingham.
*87035 "Robert Burns" was the first locomotive to be preserved. It is based at in Crewe. It was handed over for preservation by owners Porterbrook at Crewe Works Open Day on 10 September 2005.