The dedication ceremony was held on October 11, 1924 and the bridge opened as a toll bridge. It was the last link of the Meridian Highway, which became U.S. Route 81, to be completed. It was designed for use by trains for the lower half of the bridge, vehicular traffic on the upper half, and a lift mechanism to aid river traffic. However, trains never used the lower half, so it was converted to use by southbound traffic, with northbound traffic using the upper half of the bridge and the lift mechanism was removed. In 1953, all tolls were lifted.[1]

The bridge was added to the National Register of Historic Places (NRHP reference number 93000537) in 1993.

On May 9, 2008, a 10-ton gross weight limit was placed on the bridge after an inspection found corrosion on the gusset plates. The bridge will continue to be monitored while temporary repair options are being investigated. It was replaced by the Discovery Bridge upon its opening on October 11, 2008, exactly 84 years after the dedication of the Meridian Highway Bridge. [2][3]

With completion of the Discovery Bridge, the Meridian Bridge is being converted into a pedestrian/bike trail.[4] 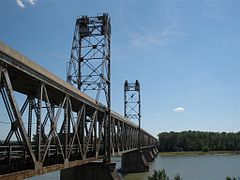