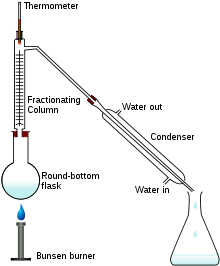 Two different condensers are seen here: an air-cooled fractionating column on left, and a Liebig condenser on the right

In a laboratory a condenser is a piece of laboratory glassware used to cool hot vapors or liquids. [1] A condenser usually consists of a large glass tube containing a smaller glass tube running its entire length, within which the hot fluids pass.

The ends of the inner glass tube are usually fitted with ground glass joints which are easily fitted with other glassware. During reflux, the upper end is usually left open to the atmosphere or vented through a bubbler or a drying tube to prevent the ingress of water or oxygen.[2]

The outer glass tube usually has two hose connections, and a coolant (usually tap water or chilled water/anti-freeze mixture) is passed through it.[3] For maximum efficiency, and to maintain a smooth and correctly directed thermal gradient so as to minimise the risk of thermal shock to adjacent glassware, the coolant usually (though not necessarily; see 'Allihn condenser - refluxing' below) enters through the lower fitting, and exits through the higher fitting. [4] Maintaining a correct thermal gradient (i.e. entering coolant at the cooler point) is the critical factor. Multiple condensers may be connected in series. Normally a high flow rate is not necessary to maintain a cooling surface. 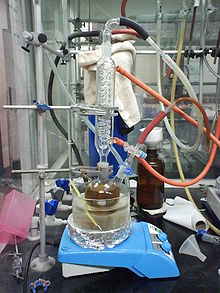 A coil condenser is used to prevent toluene from boiling away while it is being refluxed.

Condensers are often used in reflux, where the hot solvent vapors of a liquid being heated are cooled and allowed to drip back. [5] This reduces the loss of solvent allowing the mixture to be heated for extended periods.

Condensers are used in distillation to cool the hot vapors, condensing them into liquid for separate collection.[6] For fractional distillation, an air or Vigreux condenser is usually used to slow the rate at which the hot vapors rise, giving a better separation between the different components in the distillate.[7]

For microscale distillation, there are commercially available apparatus which include the "pot", and the condenser fused into one-piece.[8] This reduces the hold-up volume, and obviates the need for ground glass joints preventing contamination by grease and air leaks.

An air condenser is the simplest sort of condenser. There is only one tube, and the heat of the fluid is conducted to the glass, which is cooled by air. It is related to the retort used by alchemists. The air condenser is usually used for fractional distillation and high-temperature condensation, and it can be packed with some material such as glass beads, metal pieces, or Raschig rings to increase the number of effective plates.

A standard liebig may often be substituted by actively circulating air rather than a liquid coolant.

A Vigreux column is a modification of the air condenser. It is usually used as a fractionating column for fractional distillations. Unlike straight-walled columns, a Vigreux column has a series of downward-pointing indentations on the inside wall which serve to dramatically increase the surface area without increasing the length of the condenser. Because of their added complexity, Vigreux columns also tend to be considerably more expensive than traditional straight-walled designs. They are named after Henri Vigreux.

A Snyder column is an extremely effective air-cooled fractionating column for fractional distillations. It contains a number of segments each containing a floating glass ball-valve to enhance vapor-condensate mixing.

The Liebig condenser is the most basic water-cooled design. The inner-tube is straight, making it cheaper to manufacture. Though named after the German chemist Justus Baron von Liebig, he cannot be given credit for having invented it because it had already been in use for some time before him. However, it is believed that he popularized the device.

The true inventors, all of them inventing it independently, were the German chemist Christian Ehrenfried Weigel in 1771, the French scientist, P. J. Poisonnier in 1779, and the Finnish chemist Johan Gadolin in 1791.[citation needed]

Liebig himself incorrectly attributed the design to the German pharmacist Johann Friedrich August Gottling who had made improvements to the Weigel design in 1794.[9]

The Liebig condenser is much more efficient than a simple retort due to its use of liquid for cooling. Water can absorb much more heat than the same volume of air, and its constant circulation through the water jacket keeps the condenser's temperature constant. Therefore, a Liebig condenser can condense a much greater flow of incoming vapour than an air condenser or retort.

Additionally, stainless steel 'wool' or another heat-conductive, nonreactive material can be loosely placed in the inner cylinder of a Liebig condenser, substantially increasing the reflux effect, and the overall efficiency of the distillation. The cooling water should flow from top to bottom in this instance, as that also increases the efficiency and helps prevent thermal shock to the glassware.

A variant of the Liebig condenser having a more slender design. The narrower coolant jacket may render more efficient cooling with respect to coolant consumption.

The Allihn condenser consists of a long glass tube with a water jacket. A series of large and small constrictions on the inside tube increases the surface area upon which the vapor constituents may condense. Ideally suited for laboratory-scale refluxing.

Again, a liebig readily substitutes, taking care to enter coolant at the cooler point to maintain a correct thermal gradient; i.e., the HIGHER fitting in this case.

A Graham condenser (also Grahams or Inland Revenue condenser) has a coolant-jacketed spiral coil running the length of the condenser serving as the vapor/condensate path. This is not to be confused with the coil condenser.

A coil condenser is essentially a Graham condenser with an inverted coolant/vapor configuration. It has a spiral coil running the length of the condenser through which coolant flows, and this coolant coil is jacketed by the vapor/condensate path.

A Dimroth condenser, named after Otto Dimroth, is somewhat similar to the coil condenser. It has an internal double spiral through which coolant flows such that the coolant inlet and outlet are both at the top. The vapors travel through the jacket from bottom to top. Dimroth condensers are more effective than conventional coil condensers. They are often found in rotary evaporators.

The spiral cold finger-type apparatus now known as the Friedrichs condenser was invented by Fritz Walter Paul Friedrichs, who published a design for this type of condenser in 1912.[10]

The above water-cooled condensers can be used with other chilled liquids such as refrigerated ethanol which can be thermostatically cooled in a recycling pump unit. Using liquids other than water allows the condenser to cool below the freezing point of water. This is necessary if the fluid to be condensed boils at a temperature below 0 °C (e.g. dimethyl ether which boils at −23.6 °C).

Solid dry ice or an acetone/dry ice mixture can be used in a cold finger as a coolant. As with other alternative coolants, these permit cooling below 0 °C.