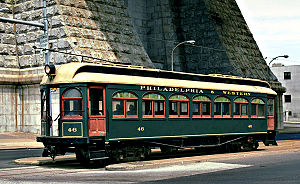 A preserved Philadelphia and Western multiple-unit passenger car at Penn's Landing in 1990.

The Philadelphia and Western Railroad was a high-speed, third rail-operated, commuter-hauling interurban electric railroad operating in the western suburbs of the U.S. city of Philadelphia, Pennsylvania. One of its lines is now SEPTA's R100 Norristown High Speed Line; the other has been abandoned. Part of the abandoned line within Radnor Township is now the P&W Trail, a multi-use path. 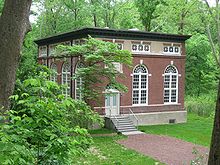 The Ithan Substation #1, located on Conestoga Road in Wayne, on the Strafford line; May, 2009

The current line runs from 69th Street Terminal just west of the Philadelphia city line, west and north to Norristown, splitting from the original main line at Villanova Junction. Formerly, the P&W's main line went west to a terminus just east of Sugartown Road in Strafford, then later, another .47 mile further, on an extension providing transfer to the PRR Strafford station and a transfer track for freight trains. The Strafford Branch was abandoned in 1956; today, the P&W Trail uses its old right-of-way from Radnor-Chester Road to Old Sugartown Road. Up until 1951, the P&W tracks connected with the Lehigh Valley Transit Company's Liberty Bell Route at Norristown, providing service straight through from Upper Darby to Allentown.

Interstate Commerce Commission valuation reports indicate that the railroad had interchange connections to the Pennsylvania Railroad at Millbourne Mills, Strafford and Swedeland.

The line was built as a double-track third rail line. Most structures on the line were designed to ultimately accommodate four tracks, but the added tracks were never built. The quality of the line was quite high, with no at-grade crossings, 2½% maximum grade, stone ballast, block signals, and 85 pound rail.[1] The Norristown Branch, which opened on December 12, 1912, while only 6½ miles long, represented a significant construction challenge due to the high standards maintained on the line's design. The line had to cross 12 highways, the main line of the Pennsylvania Railroad at Radnor, and ended in a single track steel bridge 3,800 feet long into Norristown. Some 400,000 yard of earth, 200,000 yards of stone, and 25,000 yards of masonry, and 2,700 tons of steel were used in its construction.[1]

P&W platforms in unfamiliar white livery back behind the 69th Street Terminal, circa 1908. Market Street El train in foreground 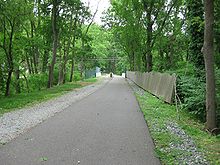 The Radnor Trail at the crossing of Conestoga Road in Wayne, PA, formerly the road bed of the P&W Strafford Branch

The Philadelphia and Western Railway was incorporated on May 21, 1902 with a capital stock of $450,000,[2] and was originally planned as the eastern link of a transcontinental railroad connecting to the Western Maryland Railroad at York. The WM connected at Connellsville with the Pittsburgh & West Virginia, which connected at Pittsburgh with the Wabash, which in turn connected with the Missouri Pacific, then the Denver & Rio Grande Western, then finally the Western Pacific to form a coast-to-coast railroad. This was a George and Jay Gould enterprise; the Goulds were often rumored to have a stake in the P&W, though they publicly denied it.[3]

The first train ran from 69th Street to Strafford on May 22, 1907. On June 6, 1907, the company was reorganizing because it had defaulted on the payment of first mortgage bonds it had issued. The company was sold at public sale by the bond trustee, the Trust Company of North America for $1,000,000 to the Sheldon Syndicate of New York, which was the original owner of the company.[4] The reorganized company had a capital stock of $4,000,000, consisting of $3,400,000 of common stock and $600,000 of 5% preferred stock.[5] The planned extension to Parkesburg and York was officially abandoned on March 22, 1912; an alternate extension to the PRR main line in Strafford opened on October 11, 1911. The Norristown Branch opened on December 12, 1912.

The company experienced financial difficulties throughout much of its existence. As noted above it defaulted on its bonds and was reorganized 5 years after founding. In 1916 Moody's rated the company's 50 year Gold First Mortgage Bonds due 1960 as "E," meaning there was "uncertain security as to principal... and a margin of safety over interest as small."[6] The company was again reorganized as the Philadelphia and Western Railroad in 1946. It was sold to the Philadelphia Suburban Transportation Company in 1954; PST was nicknamed the Red Arrow Lines, and merged into SEPTA in 1970.

The P&W once operated local freight trains to various industries along its line until 1970, when the Merion Golf Course stopped its deliveries of sand and other materials. With freight no longer running, the line no longer required FRA control. It was then disconnected from its last interchange, isolating the line from the outside world and then immediately converted from a railroad to a more cost-effective trolley-type operation and continues to operate as such today. Service is currently provided by a fleet of 26 N-5 Light-Rail Vehicles that feature AC-induction propulsion, steerable axles, very large windows, comfortable seating, and are capable of 80 MPH. They were built by ABB Traction in 1990 with their stainless steel bodies being built by SOREFAME which is a Portuguese Budd Company (Philadelphia) licensee.

The last train ran on the Strafford Branch on March 23, 1956. Service is still provided on the Norristown line today. Ground was broken for the P&W Trail on June 10, 2004, and it opened in January 2005.

The first cars built for the P&W never ran on the P&W, since the cars were completed before the line was ready to open. Twenty-two wooden electric multiple-unit passenger cars and 2 full-baggage-configured MU's were built for the P&W by the St. Louis Car Co. in 1906. However, due to the San Francisco earthquake 12 of them went to the United Railroads of San Francisco, 4 went to the Sacramento Northern Railroad, and the remainder went to the Erie Railroad Rochester-Mt. Morris Branch, where they were modified and rewired for overhead AC operation. The 12 cars that went to URSF had their bulkhead doors sealed and their MU capabilities removed, operating strictly as single-units. The 4 SN cars were converted into motorized combination baggage/passenger cars and used on the Woodland Branch. The two baggage cars were accepted by the P&W, where they were turned into line-maintenance cars. Finally in 1907, 22 wooden passenger cars, almost identical to the original order, arrived on P&W property. They were originally equipped with retangular-shaped bow collectors, which were later replaced with trolley poles for use in the carbarn area in addition to third rail shoes. Of these cars, No. 46 survives, along with line car No. 401 from the original order; both of which are preserved at the Electric City Trolley Museum in Scranton, PA. Prior to the move to Scranton, they ran as a two-car train while in operation at the Philadelphia Waterfront every Christmas season for many years as the "Santa Train," with No. 401 operating as Santa's workshop and No. 46 used for the passengers.

One type of vehicle used for this line were two 4-unit articulated train sets called Liberty Liners, which were originally the Chicago North Shore and Milwaukee Railroad's Electroliners. These shovel-nosed high-speed trains featured a bar car and were capable of speeds exceeding 100 mph. They were built by the St. Louis Car Co. in 1941. The Philadelphia Suburban Transportation Company bought both of these trains in 1963. PST removed their trolley poles and replaced their original gravity-type over-running third rail shoes with paddle-type shoes. They were repainted into Red Arrow's color scheme and run in rush hour service with the bar serving continental breakfast in the morning and serving snacks and spirits in the afternoon. They were retired in 1977 due to excessive power consumption plus their excessive weight was just too much for the old jointed rail. As of 2006 they were in museums: one, restored to its original Electroliner appearance, at the Illinois Railway Museum, and the other at the Rockhill Trolley Museum.[7]

Later-model train from the P&W line, "Bullet" No. 206 on display at Steamtown in Scranton, PA.

Another type of vehicle was the Brill Bullet, which ran in service from 1931 almost to 1990. Though tested at 100+ MPH, these regularly ran at 80–85 mph in regular passenger service. These streamlined electric multiple-unit passenger coaches were the world's first-ever high-speed "Bullet" trains, and their design influenced later streamlined trains built in the U.S., Belgium, Germany, and Japan. Built during the Great Depression, they were the first railroad equipment ever designed in a wind tunnel in order to lessen power consumption while quickening schedule timings. And they did just that, cutting Norristown Express schedules by up to a third, from 24 to only 16 minutes while consuming some 40% less electric power than the MU equipment they replaced.[8]

A third and older type was the "Strafford Car," built between 1924 and 1929. The last Strafford Car was retired on March 30, 1990. These MU's originally had bulkhead doors to permit passengers to walk from car to car, high-mounted headlights, trolley poles, and vestibule steps. The bulkhead doors, vestibule steps, and trolley poles were later removed and headlights relocated to below the windshield to make them more aerodynamic and their motors were rewired from 60 to 100 HP, increasing their top speed from 45 to 70 MPH, making them easier to keep up with the newer Bullet trains. By this time the overhead wire in the carbarn area was replaced with extension wire which attached to the third rail shoes to move the MU equipment.[9]

Three other Strafford-type cars, called the 50-series, were purchased from Brill in 1920. They were wider and longer than the later Straffords and never had vestibule steps. They were never rebuilt so with their top speed still only 45 MPH, they had to be used strictly in rush hour short-turn service so they wouldn't get in the way of the other much faster trains. They were finally scrapped in 1952.

Many, widely varied proposals were made to get new equipment for the P&W line but were never carried out. In 1964 a 65-ft. long, high-platform Budd Silverliner-type MU was proposed. There has been much speculation that these cars were actually under construction at Budd when the order was cancelled and the cars became the Rail Diesel Cars that were later sold to Brazil for use on their narrow-gauge mountain-climbing lines; these cars still run today. Then in the late 1970s it was proposed to add-on to the order for the Broad St. Subway cars from Kawasaki with a modified door arrangement. In 1982 a proposal was made to make the line into a wide-gauge, overhead wire, low-platform trolley line which would become connected with the Media and Sharon Hill lines at 69th St. Then a compromise proposal was made for a modified Kawasaki LRV with high-platform doors and standard railroad-gauge trucks. These cars would have looked similar to PCC streetcars with their single, centered headlight and two-piece windshield. Eventually by the late 1980s the order was finally placed for the current fleet of N-5 cars.