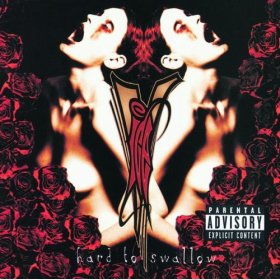 "Hard to Swallow" is the fifth by . Released on October 20, 1998, the album was the first album the performer recorded after a four year hiatus following the 1994 release of "". Previously known for performing hip hop music, "Hard to Swallow" instead featured what Vanilla Ice described as "skate rock".

The album was produced by , who helped Vanilla Ice develop the sound he had been looking for while performing as a member of a Miami grunge band.

Robert Van Winkle, better known under the stage name Vanilla Ice, was briefly a member of a band called Pickin' Scabs, which he described as being "like a grunge band." Van Winkle had wanted to perform more hip hop-influenced rock music, but states that the band "didn't know how to play this sound that I was looking for."

During a conversation with Monty Lipman, a founder of and former promoter, Lipman asked if Van Winkle had heard of . When Van Winkle told him that he hadn't, Lipman told Van Winkle some of the bands that Robinson had worked with, such as , , and , and that Robinson was interested in working with Van Winkle.

Van Winkle states that he and Robinson were "totally clicking right off the bat" when it was discovered that they both shared an interest in racing.

According to Robinson, others had attempted to persuade him not to produce the album. "People kept saying to me, 'It might hurt your name, it might hurt your reputation. I said, 'Then I'm doing it.' It's the most punk-rock thing you could do."

Initial publicity claimed that the album would feature guest appearances by and members of Korn and the .

Drummer stated of the album "I'm proud of that one. That was a killer record. Producer Ross Robinson is very demanding when it comes to drums in the studio. Everything had to be 110% for that guy, and I love him for that." [cite web |url=http://www.moderndrummer.com/updatefull/200001380 |title=Shannon Larkin: Showman |accessdate=2008-06-24 |last=John Farinella |first=David |coauthors= |date= |work= |publisher=""] Van Winkle stated of working with Robinson, "The vibe was totally so cool. We had the album finished in a month and a half because we kept the vibe."

In the early stages of the album's development, it was promoted as an album of "high-energy hip-hop." [cite web |url=http://www.rollingstone.com/artists/vanillaice/articles/story/5921192/to_the_extreme_and_back |title=To The Extreme and Back: A clean-and-sober Vanilla Ice returns again with "Hard to Swallow" |accessdate=2008-03-23 |last=Fischer |first=Blair R. |coauthors= |date=March 12, 1998 |work= |publisher=]

The subjects focused on in the album's lyrics include Van Winkle's abusive childhood and drug addiction. Van Winkle stated that "I wrote 'Fuck Me' 'cause I know how I've been perceived. "I can look back at the whole Vanilla Ice thing, and it was played way out. It was just an image thing. I was always real to the music. But it built a huge hurdle for me to get over musically. A lot of people didn't even want to admit they bought a Vanilla Ice record." "Too Cold" is a rapcore remake of Vanilla Ice's biggest hit, "". Van Winkle states that he remade the song because "I wanted to let people know that I'm not running from anything. This is me. This is what I'm about. I think the music speaks for itself. If the music was whack, nobody'd even care to hear anything about no Vanilla Ice. I just think the music is so strong people are kinda comin' out of the closet. It's like, 'You know, hey, I bought it back in the day, and the new stuff is slammin'.' I think there's some hip-hop influenced, stage-diving, body piercing, tattooed white boys out there who are embracing this new sound." "Too Cold" was originally intended to be released as a or B-side.

Many critics have noticed a similarity between the style of music present on "Hard to Swallow" and that of bands such as Korn and Limp Bizkit.