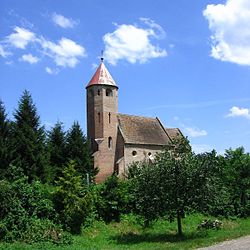 Morović (Моровић) is a village in northwestern Serbia in the Šid municipality, Srem District, autonomous province of Vojvodina. The village has a population of 2,164 people (2002 census), mainly of Serbian origin.

In the Middle Ages, Morović was a notable town. It was built by Serbian despot Stefan Štiljanović in 1498.[1] Štiljanović used Morović as his residence until he moved to Baranya, escaping the Ottomans.

Morović lies on the banks of the Bosut and Studva rivers and is surrounded by opulent oak forests.

The old Catholic church from the 13th century, built in both romanesque and gothic styles is a very noteworthy monument. Jamena a nearby village can only be accessed by traveling through Morovic. 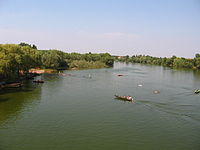 Morović is most famous for its hunting area often referred to as Tito's hunting ground, it was one of his favorite hunting grounds in the time of Yugoslavia. In recent years it has attracted interest from international hunters with excellent facilities and accommodations dedicated to the sole purpose of hunting. The surrounding area contains an abundance of red deer, fellow deer, wild boar and pheasants. It spreads on 2500 hectares covered with magnificent centenary oaks. In the middle of the reserve there is Tito's hunting lodge with eight beds and another common hunting lodge with about twenty beds. The infrastructures are very good and all the reserve is very well looked after. The area also hosts a well known fishing tournament every year, the area is popular with anglers due to the surrounding rivers around Morović.

The local football club is FK Jedinstvo Morović, it currently competes in the VOJVOĐANSKA LIGA - JUG(South) which is the equivalent fourth division.