There is also the river Ohre in northern Germany. 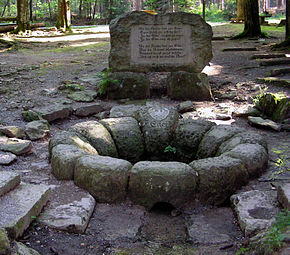 Source of the Eger (Ohře)

The source of the river is situated in Bavaria at the foot of Schneeberg mountain in the Fichtelgebirge Range near the town of Weißenstadt. The Eger flows through the "Weissenstadt Lake" and the towns Roeslau, Marktleuthen and Hohenberg where it leaves Germany. After approx. 35 km, the Eger (not to be confused with the town in Hungary), as the river is called in German, crosses the border to Czech Republic to flow through parts of Bohemia which were known until 1945 as Egerland. The river passes the cities Cheb, (German: Eger, like the river), Karlovy Vary, Klášterec nad Ohří, Kadaň, Žatec, Louny, and Terezín before flowing into the river Elbe in Litoměřice.

Several districts in Germany and the Czech Republic have formed an Euroregion initiative named Euregio Egrensis to foster cooperation in the region of Eger/Ohře/Cheb.

There is a Czech pun that Ohře got its name from the river Teplá (meaning "warm" in Czech) - "ohřát" means "to warm up." However the real origin, which also shows in the German name, is Celtic from Agara (the "Salmon River"). The records show the name as Agara, Agira, Agra in 800s and Egire, Egra or Ogra in 1000s and Eger in 1472.[1] Another theory states that since in Macedonia there exists a lake Ohrid, the slavic people that settled down in the Balkans, particularly Macedonia around lake Ohrid, originated from the area where Ohře is situated and therefore because of the similar nature also called the lake in south Macedonia by the name Ohrid

The highest volume flow rate occurs in spring. The average volume flow rate at the mouth is 37.94 m³/s. The lower part of the river flows through areas with the lowest average precipitation in the Czech Republic (less than 500 mm).