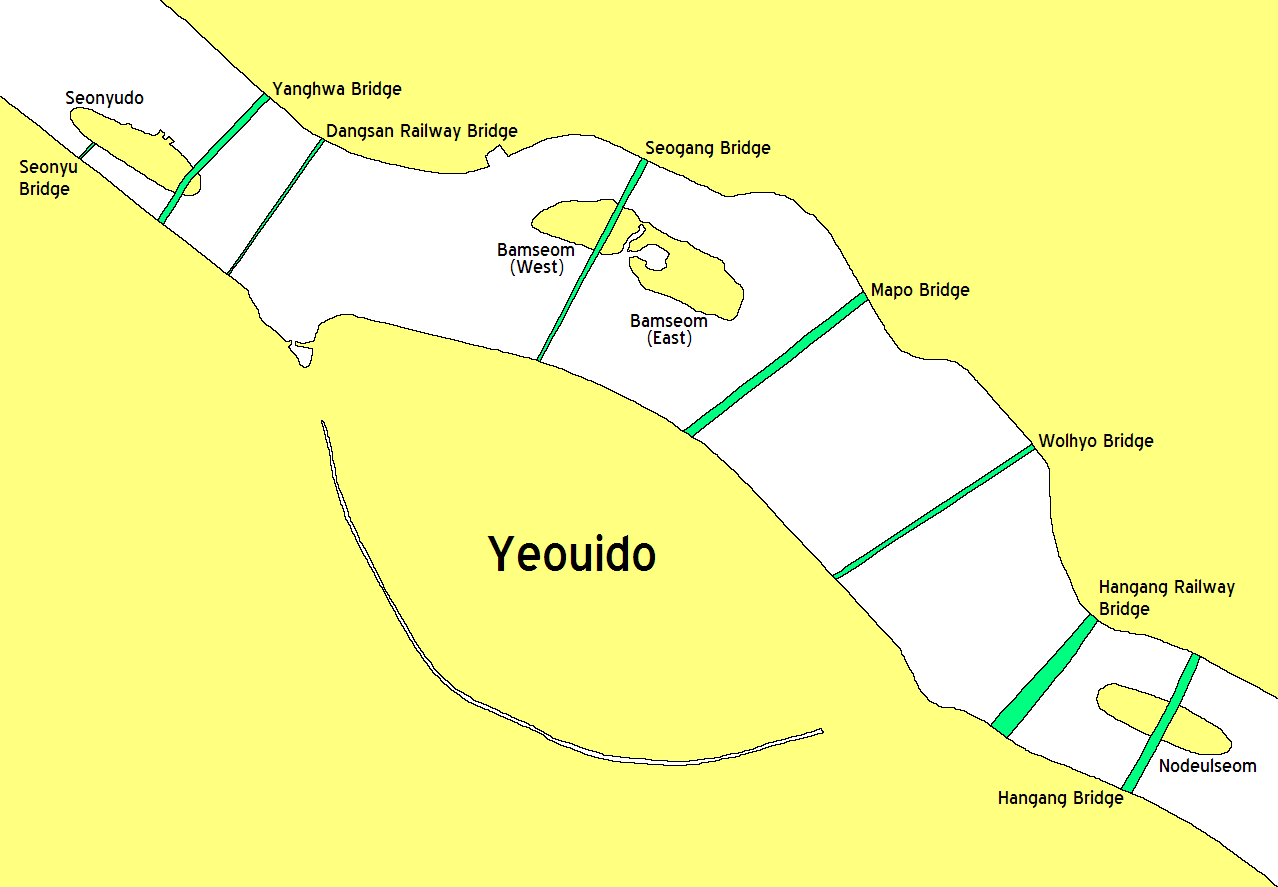 Bamseom is a pair of islets in the River Han in , . The uninhabited islets, with a total area of 241,000m² and length of 1,147 metres, are located between the larger island of , to which they were once connected [ [http://parks.seoul.go.kr/main/english/youido/history.htm Introduction - Changes to Yeouido ] ] , and the north shore. They remain connected to one another by a narrow strip of sedimentary silt. passes directly over the western islet, though there is no access available, as the islets have been left as a natural sanctuary. There is, however, an observation point for bird-watching. Migratory birds use the islets often and among the birds which can be seen are mallards, great egrets, mandarins, common kestrels and spotbills [ [http://english.seoul.go.kr/today/about/about_05han_0503.html Seoul Metropolitan Government - "A Clean, Attractive & Global City, Seoul!" ] ] .

The islands were inhabited until the was built over it, using the west islet as a support for one of the beams. Most of the inhabitants of Bamseom in the Joseon era were ship-builders.

Bamseom cherishes quite important status for lots of species such as mandarin duck which is Korean natural treasure and main shelters of migrand birds during winter time. There are about 108 species of plants like the willow trees, the itch reeds. Additionally, Bamseom is the best place for children living in cities to go through natural views. From 1999, Seoul metropolitan government registered Bamseon as natural preservation districts. [Yeongdeungpo Park(영등포공원) http://park.ydp.go.kr/PD020000.asp1(Kor) ]

The west islet, that over which passes, has a length of 560 metres. This is the more forested of the two islets, particularly at the western point.

The east islet has a length of 655 metres. This islet contains a bay which opens onto the strip of water between the islets. This bay has largely silted up and is therefore marshy and contains many reeds and reed-dwellers.

Bamseon has facilities which enables to observe birds and natural sceneries. So far there are 6 observatory platforms and direction boards for visitors. The facility allow s citizens to visit from December and last February of next year. [Yeongdeungpo Park]

This decision was largely made from governmental decision since 1999 and the flight of birds is important sight among observers.