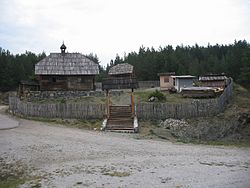 Memorial complex of clairvoyant Tarabići in Kremna near Užice, Serbia.

The Kremna Prophecies or Prophecy from Kremna are a collection of prophecies purporting to have been written before twentieth-century events that they describe. While the prophecies do indeed closely match the events, there is no evidence that they were written when claimed, and serious doubts have been cast on them.

The Kremna Prophecies originated in the village of Kremna, in Serbia. Illiterate peasants Miloš Tarabić (Милош Тарабић) and his nephew Mitar Tarabić (Митар Тарабић) built a reputation for predicting the future. Their village priest is said to have recorded their predictions. Both Tarabics died before 1900. The following simple translations, from Serbo-Croatian to English, were prepared by Robert Gakovich.

There appears to be no documentation suggesting that any of the "accurate" prophecies were published in advance of the events they foretell.

Voja Antonić investigated the claims of self-proclaimed prophets Miloš and Mitar Tarabić, and found that twelve copies of the book Prophecy from Kremna were all different, and changed over time. During his research he visited Kremna, where he was offered the "original handwritings" of Mitar Tarabić—who was illiterate.

He published his findings (in Serbian) as "Kremansko neproročanstvo: studija jedne obmane" (Non-Prophecy from Kremna - a study of deception), ISBN 86-902159-2-1. Excerpts can be found on the author's web site[1].

Analysis of the prediction: Mostly correct.

"Then, there will be peace, and across the world, many new countries will emerge. Some black, some white, some red, and some yellow. Some kind of elected court will be created, which will prevent countries from going against each other. That elected court will be above all nations. In places where war would break out, this court would arbitrate and restore peace. After a while, some small and large countries will stop respecting this court. They will say that they respect this court, but in reality, they will do what they wish."

Analysis of the prediction: accurate.

"Our kingdom will be strong and well loved and respected by everybody. People will eat only white bread, and whole wheat just when they want to. Everybody will ride around in carts with no oxen. People will travel in the sky, looking down upon our land as if they had climbed on the doubled Tara mountain.

"Serbia will prosper best while the man with blue eyes on a white horse governs, one who will come to Serbia bringing some kind of new religion. He will ascend our throne, and will be strong and healthy, living a long life close to one hundred years. He will very much like to hunt, and one time while hunting he will accidentally fall from his white horse and thus lose his leg. From this wound he will die, not because of his great age.

"After him our land will be governed by some kind of commission, but it will never be as it was. Even though the people in our kingdom will forget about misery and hunger and will live in great wealth, brother will start to hate and think evil of brother.

"On our borders and over them a new nation will appear. They will grow like grass after a deluge, they will be good and honest, and they will answer our hatred with reason. They will take care of each other like brothers. And we, because of our madness we shall think that we know everything and that we can do anything, and we shall baptize them with some new fate of ours, but all that will be in vain. Because they will believe only in themselves and in nobody else. Big trouble will become of it, because this nation will be brave.

"Many summers this trouble will last, and nobody will be able to stop it, because that nation will grow like grass. One who will be born many summers after you will be honest and intelligent, he will deal with them in peace.

Analysis of the prediction: Generally accurate.

"There will be some wars near the country of Judea, but little by little, peace will come in that area. In these wars, brother will fight against brother, but then they will make peace. However, hate will still remain within themselves. A period of relative peace will continue for a long time."

Analysis of the prediction: bad statistics mar this prediction.

"Some kind of disease will spread all over the world, and nobody will be able to find a cure for it. In their search for the cure... people will try all kinds of things, but not find the cure. In reality, the cure will be all around them, and inside them as well."

Analysis of the prediction: Not specific enough, possibly AIDS,cancer

"Here in Kremna many a field will become a meadow, and many a home will be abandoned, but then those who have left will come back to heal themselves by breathing fresh air. In Serbia it will not be possible to distinguish a man from a woman. Everybody will dress the same. This calamity will come to us from abroad but it will stay with us the longest. A groom will take a bride, but nobody will know who is who. People will be lost and more and more senseless day by day. Men will be born not knowing who was their grandfather and great-grandfather. People will think that they know everything, but not a thing they will know.

"The Serbs will separate from each other, and they will say, "I am not a Serb; I am not a Serb." The unholy one will infiltrate this nation and bed with Serbian sisters, mothers and wives. He will sire such children that among the Serbs, since the beginning of the world, these will be the worst of offspring. Only weaklings will be born, and nobody will be strong enough to give a birth to a real hero.

"At one time we shall disappear from this land of ours. We shall go to the north, and then realizing our stupid deed we shall return. When we come back, we shall wise up and chase away the unholy one, not to see him, in God's name, ever again.

"Man will build a box with some machine in it that makes images. People will be able to see what is happening everywhere in the entire world."

Drilling in the Earth

"People will drill wells in the ground and pump some kind of gold, which will produce light, speed, and power. The Earth will weep because of that. Man will not know that more energy and light exists on the surface of the Earth. Only after many years, people will discover this, and they were fools to be drilling holes in the ground."

Orthodoxy Mihailo the new patriah of Russia will house himself in Constantinople, and the new seat of Christianity will be moved there.

PREDICTION: The current Patriarch of Russia has died and is to be replaced soon.

There are still three pages the Milenkovic family has not released about the Tarabić prophecies, two that relate directly to their family and one more specific about Serbian unification Catholic Muslim and Orthodoxy and how it will happen.