Before 1881, the Diocese of Dubuque's territory comprised the entire state of Iowa. Previous divisions had taken territory outside the state of Iowa from the Diocese to give to other newly created Dioceses. Eventually, Bishop John Hennessy became convinced that the Dubuque Diocese should be further divided, with the Dubuque Diocese covering the northern half of the state, and the southern half covered by a new diocese. Hennessy felt that the See of this new Diocese should have been located at Des Moines, Iowa. However the Vatican chose Davenport as the See city of this Diocese.

On June 14, 1881[1] the southern territory of the Dubuque Diocese was taken to form the Diocese of Davenport. Fr. John McMullen, a priest in the Archdiocese of Chicago was chosen to be the first Bishop. Bishop McMullen was ordained as Bishop by Archbishop Patrick Augustine Feehan of Chicago, Bishop John Hennessy of Dubuque, and Bishop John Lancaster Spalding of Peoria.

The Diocese of Davenport was split in two on August 12, 1911, which reduced it to its current size. The Diocese of Des Moines became the See city of this new diocese, which covered the southwestern quarter of the state of Iowa.

In recent years, the diocese of Davenport has been affected by the abuse scandal involving members of the clergy.

From its very beginning the diocese has a history of supporting higher education. At one time there were four Catholic colleges within the boundaries of the Diocese of Davenport. Today there is only one, Saint Ambrose University.

St. Ambrose was founded as a seminary and school of commerce for young men in September 1882. It was founded by the diocese’s first bishop, Rt. Rev. John McMullen, in the school building of St. Margaret’s Cathedral. The college moved to its current location in 1885. The school’s name was changed to St. Ambrose College in 1908 it better reflect its identity. The school grew steadily over the years and in 1987 it became St. Ambrose University.[2]

The Congregation of the Humility of Mary founded two schools in the diocese. The first school was established at their motherhouse when it was in Ottumwa. Founded as Visitation Academy in 1864, it had several name changes until 1930 when it was named Ottumwa Heights College. Ottumwa Heights merged with Indian Hills Community College, a part of the state of Iowa’s community college system, in 1979 and has been officially inactive since 1980. The community’s former motherhouse and college property has been IHCC’s main campus since 1981.[3]

The Sisters of Humility also founded Marycrest College in Davenport as the woman’s division of St. Ambrose in 1939. By the 1950s it had become a separate institution, and it started admitting men in 1969. The school, however, started to decline in enrollment as well as financially. In 1990, Marycrest became affiliated with the Teikyo Yamanashi Education and Welfare Foundation of Japan and was renamed Teikyo Marycrest University. In 1996, the institution's name was changed to Marycrest International University in an attempt to reflect its global mission. However, enrollment continued to decline and financial difficulties persisted and the school closed in 2002.[4] The campus continues intact and in 2006 it became Marycrest Senior Campus, a residential facility for senior citizens.[5] It has no affiliation with the diocese.

The Sisters of St. Francis of Assisi established Mt. St. Claire College for women in 1918 in Clinton. The college began offering graduate courses over the internet in 2002 and changed its name to The Franciscan University. In 2004, the school modified its name to The Franciscan University of the Prairies, so as to avoid confusion with similarly named institutions. In 2005, the school was purchased by Bridgepoint Education, Inc. and the sisters ended their sponsorship. The school is now known as Ashford University.[6]

Since 1947 the diocese has supported a dedicated campus ministry program at the Newman Catholic Student Center at the University of Iowa in Iowa City.

The coat of arms for the Diocese of Davenport was designed after the arms used by members of the Davenport family in England. The family's arms are described as, "Argent (white or silver), a chevron sable (black) between three cross crosslets fitchée of the second."[7] The diocesan shield maintains the use of the silver color and the black cross crosslets fitchée. The black chevron is replaced with a black crenellated tower. The diocese does not generally use the bishop's mitre on top of the shield. 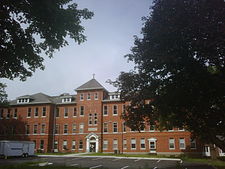 The following is a list of Bishops who served the Diocese of Davenport, along with their dates of service:

The following is a list of Bishops who assisted the Bishop of Davenport, along with their years of service:

The following is a list of priests from the Diocese of Davenport who became bishops, along with the years they served the Davenport Diocese as a priest and the diocese they served as bishop:

The following structures are listed on the National Register of Historic Places. Some of the structures are no longer part of the diocese but are listed here because of their historical significance to the church.