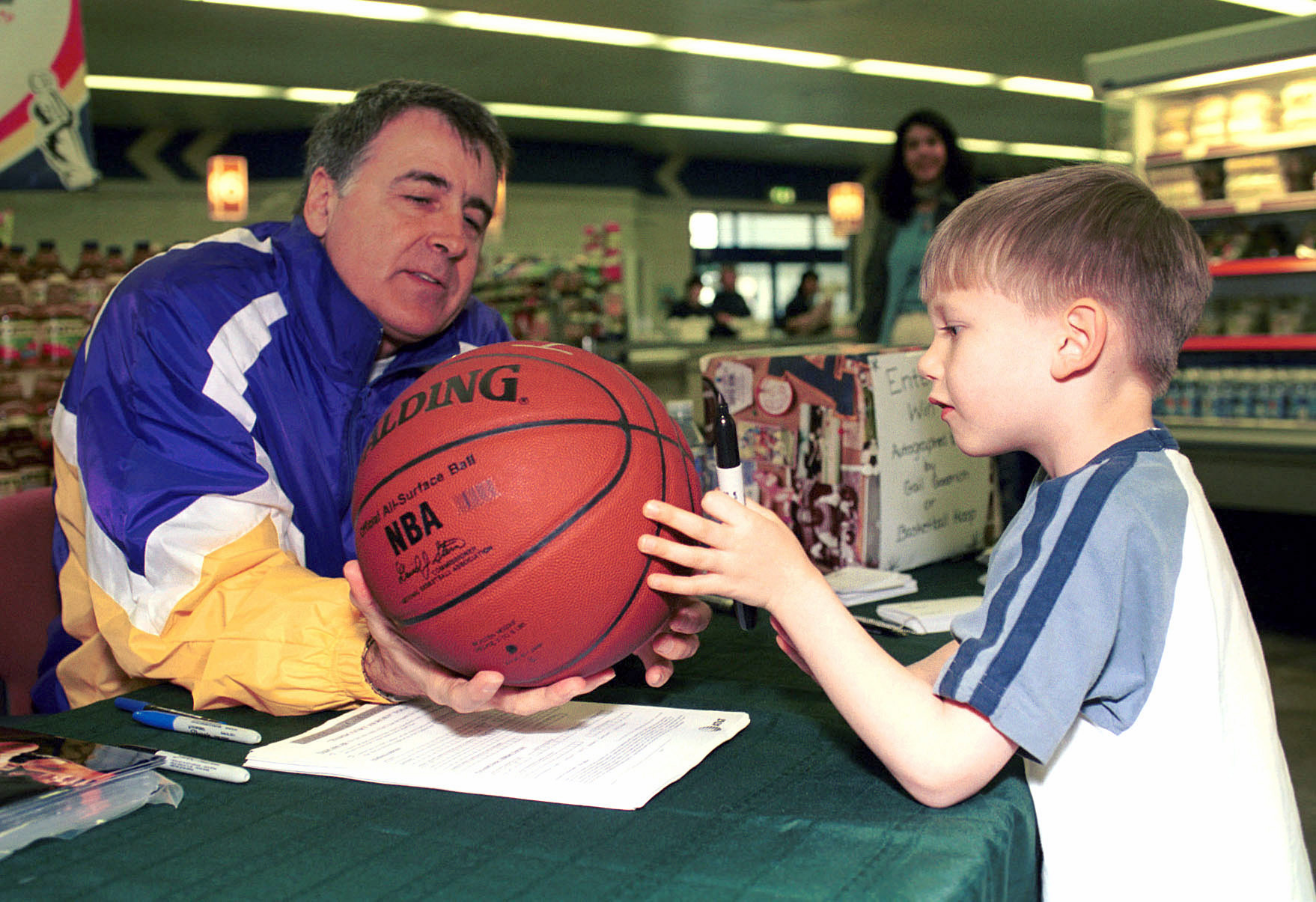 Gail Charles Goodrich Jr. (born , in ) is a former professional player in the (NBA). He is best-known for his part in the ' 1971-72 season. During that season the team won a still-record 33 games consecutively, posted what was at the time the best regular season record in NBA history, and also won Los Angeles' first NBA championship. Goodrich was the leading scorer on that team. [databasebasketball.com, [http://www.databasebasketball.com/teams/teamyear.htm?tm=LAL&lg=n&yr=1971 Los Angeles Lakers (1971-72)] , accessed , ] In 1996, 17 years after his retirement from professional basketball, Goodrich was elected to the .

A native of the Los Angeles area, Goodrich was the captain of the basketball team that won the 1961 Los Angeles City high school basketball championship.

He attended college at the (UCLA), where he finished as the school's all-time leading scorer and played on the school's first two national championship teams in 1964 and 1965. Was a two-time All-America and the Helms Foundation’s “Co-Player of the Year” (along with Princeton’s Bill Bradley) in 1965.

In the 1965 NCAA championship game, he scored a record 42 points as UCLA beat favored Michigan. This record stood until 1973 when Bill Walton scored 44 in the finals vs. Memphis State, and through 2007 it is still the 2nd highest total scored by a player in the championship game. While at UCLA, Goodrich was also a member of the Fraternity.

Goodrich has said that he had originally wanted to attend the (USC), where his father had once been a star player, but that coach of UCLA ultimately showed a great deal more interest in Goodrich than did USC. Like many Division I colleges, USC was wary of Goodrich's short stature. He was only 5'8" his junior year in high school and even at his ultimate height of 6'1", he was short by college basketball standards. He was called Stumpy by his teammates.

A tenacious and fiery competitor, Gail Goodrich used intelligent ball-handling skills and excellent court vision to lead two of the most successful teams in basketball history. The left-handed Junior guard was the team’s main scorer. He finished with an average of 21.5 points per game and guided the 1963-64 UCLA Bruins to a 30-0 record. For the first time ever, a UCLA team won all 30 of its games en route to the school’s first NCAA title. Goodrich and Keith Erickson were the only returning starters from the team that won UCLA's first national title in 1964. As a senior the Bruins repeated as NCAA champions as Goodrich scored 24.6 points a game. At UCLA Goodrich helped compile a 78-11 three-year record. In both of those championship seasons, Goodrich was named to the NCAA Final Four All-Tournament team and he finished as UCLA's all-time leading scorer (1,690 points).

As determined by fan vote

Although many believed Goodrich was too small for the college game and too frail for the pros, Goodrich, through perseverance and discipline, proved his doubters wrong. Goodrich was nicknamed "Stumpy", a moniker bestowed upon him by teammate , because of Goodrich's height.

In 1968, the Lakers lost Goodrich to the Phoenix Suns in the expansion draft, and he quickly became the star of the new franchise and a favorite among Suns fans. A full-time starter for the first time in his NBA career in 1968-69, Goodrich scored 23.8 points per game&mdash;sixth in the league and tops on his team. He surprised critics who had labeled him a gunner by ranking seventh in assists with 6.4 per game and was also selected to play in the . In 1969-70 Goodrich scored 20.0 ppg and 7.5 apg (both tops on the team). After the season he was traded back to the Lakers in exchange for Mel Counts.

The 1973-74 season was the best all-around season in his career. He was First-team All-NBA and again an All-star. he scored over 2,000 points and averaged 25.3 points a game&mdash;4th in the league in scoring, while leading the NBA in free throws made and free throw attempts as he drove the basket perhaps more than at any point in his career. In 1973-74 he was in the second year of earning $180,000 per season.

Goodrich, then 31, dropped about 10 pounds for the 1974-75 season stating, "I decided prior to this season that I would lose about 10 pounds to get down to my college playing weight of 172 ... I'm sure it helps with my quickness and my stamina." Goodrich led the Lakers in scoring with a 22.6 per game average.

Goodrich held out in the Fall of 1975 and missed the first four games while playing out his option allowing to be a free agent the following season. In the 1975-76 season Goodrich switched roles, becoming the "playmaking" guard rather than the "shooting guard", switching spots with Lucius Allen. Goodrich had played a similar role in Phoenix but during his time with Jerry West, Goodrich was the shooting guard. Ironically, Allen was the shooting guard when he played with Oscar Robertson on the champion Milwaukee Buck team. So, both were familiar with the roles. According to a Long Beach paper the switch worked and "did wonders for a slumping Laker team". That same season the Laker had acquired Kareem Abdul-Jabbar to upgrade the center position from Elmore Smith.

On , , Gail signed a three-year contract reportedly worth $1.4 million with the New Orleans Jazz where he teamed in the backcourt with . Early in the 1976-77 season Goodrich sustained an Achilles heel injury that required surgery. In January, 1977, Goodrich filed a lawsuit against the Lakers alleging that he was shorted over $150,000 of his $275,000 1975-76 season salary due to fines for missing training camp and for pre-season and some regular season games. The lawsuit also asked for $75,000 punitive damages stating that the fines were a "breech of contract". He rehabilitated the leg and prepared hard for the 1977-78 season and it seemingly paid off as he averaged 16.1 points a game and shot a career-best .495 from the field as a 34-year old guard.

His impact upon the Laker franchise extended far beyond his playing years. When he signed with the New Orleans Jazz in 1976, per league rules, the Lakers were to receive compensation for losing a veteran free agent. The Lakers and Jazz agreed to send New Orleans' highest pick from the 1979 draft to Los Angeles (along with a 1978 number one pick and an additional second round pick). When the Jazz finished the 1978-79 season with the worst record in the NBA, the Lakers were eligible for one of the top two picks of that draft. Until 1985, the two teams with the worst records flipped a coin to determine which team would receive the top pick. The Lakers won the coin flip against the , who selected David Greenwood 2nd. The Lakers selected . The other top pick was used for Kenny Carr. For his career, Goodrich was a 5-time All-Star and was All-NBA in 1973-74. He is still the third all-time scorer among lefties in NBA history. At the time of his retirement in 1979, Goodrich was 11th all-time in scoring and 10th all-time in assists.

On , , the Lakers retired his #25 jersey. On , , UCLA did likewise. In high school he wore #12 and that number was retired by Poly high as well.

Was considered, along with and Bob Weiss for the Clippers head coach job in 1980.

After his basketball career, Goodrich and his family eventually settled in . Goodrich became an executive with a golf course management company, and he serves as a studio analyst for .