Monica Imes Hicks (born December 11, 1967),[1][2] known professionally as Mo'Nique, is an American comedienne and actress. Mo'Nique rose to fame in the UPN series The Parkers while making a name as a stand-up comedian hosting a variety of venues, including Showtime at the Apollo. Mo'Nique transitioned to film with roles in such films as Phat Girlz, and Welcome Home Roscoe Jenkins.

In 2009, she received critical praise for her villainous role in the film Precious. For this performance, she has won numerous awards including an Academy Award for Best Supporting Actress, a Screen Actors Guild Award, a Golden Globe Award, and a BAFTA Award. She is the sixteenth African American actress to receive a nomination for the Academy Award for Best Supporting Actress, and the fourth to win. Overall, Mo'Nique is the twelfth individual African-American to win an Oscar for acting; and the seventh winner during the decade of the 2000s. She hosted The Mo'Nique Show, a late-night talk show that premiered in 2009 on BET. On July 28, 2011, BET announced that The Mo'Nique Show would not be picked up for another season.

Mo'Nique was born in Woodlawn, Maryland,[1] to Steven Imes, Jr., a drug counselor, and Alice Imes, an engineer.[3] She is the youngest of four children. Mo'Nique graduated from Milford Mill High School in Baltimore County and attended Morgan State University.[4] She is a 1987 graduate of the Broadcasting Institute of Maryland.[5]

Before working in her chosen career, Mo'Nique worked as a phone operator.[6] She got her start in comedy at the downtown Baltimore Comedy Factory Outlet, when her brother Steve dared her to perform at an open mic night.

Mo'Nique admitted during an interview with Essence magazine in 2008 that she was sexually abused by her brother Gerald from the age of seven until she was eleven. He went on to sexually abuse another girl and was sentenced to 12 years in jail. After her twin boys were born in 2005 she cut all contact with her brother and they have not spoken since.

On April 19, 2010, Mo'Nique's brother admitted on Oprah to abusing her when he was 13 and she was around 7, and that the abuse continued for over several years.

She played the role of Nicole "Nikki" Parker on the UPN television series The Parkers. The show ran from 1999 to 2004. Mo'Nique was subsequently featured on a number of leading stand-up venues, including stints on Showtime at the Apollo, Russell Simmons' Def Comedy Jam, and Thank God You're Here.

She was also named hostess of Showtime at the Apollo. She is currently the hostess and executive producer of Mo'Nique's Fat Chance, a beauty pageant for plus-sized women, on the Oxygen cable network. She hosted the first season of Flavor of Love Girls: Charm School on VH1, where she crowned Saaphyri as the winner.

Her 2007 documentary I Coulda Been Your Cellmate!, focuses on women who are incarcerated. Mo'Nique touches on the common factors that bring many women into the penal system in her interviews with individual women. The documentary was related to her filming a comedy special at the Ohio Reformatory for Women, also known as The Farm.[citation needed] In 2007, Mo'Nique had a guest-starring role on the hit television series Ugly Betty as L'Amanda, Mode's weekend security guard

Mo'Nique stars in her own late-night talk show called The Mo'Nique Show. Taped in Atlanta, the show premiered October 5, 2009, on BET.[7]

Mo'Nique has had a number of supporting roles in film. She appeared in the 2008 comedy film, Welcome Home Roscoe Jenkins with Martin Lawrence. She has had roles in Beerfest, 3 Strikes, Two Can Play That Game, Half Past Dead, and Garfield: The Movie, in which she voiced a CGI character but her role was cut from the movie. She also appeared in Soul Plane.

In 2005, Mo'Nique played a significant role in the Tony Scott bounty hunter thriller Domino, co-starring Keira Knightley and Mickey Rourke. In 2006, Mo'Nique was cast as the lead in Phat Girlz, a comedy about an aspiring plus size fashion designer struggling to find love and acceptance. The film was met with lukewarm response from critics and fans. It did earn back its $3 million production cost in its first weekend of release.[8]

She was featured in soul singer Anthony Hamilton's video "Sista Big Bones", the second single from his Ain't Nobody Worryin' album. She plays the role of a beautiful plus sized woman whom Anthony secretly admires because she has always loved herself.

Mo'Nique hosted the 2003 and 2004 BET Awards and appeared as the host again for the 2007 BET Awards. She received positive responses in July 2004 with her opening performance of Beyoncé's single "Crazy in Love"; as well as in 2007 by performing her "Déjà Vu".

Mo'Nique claimed on the January 28, 2008, Oprah Winfrey Show that Martin Lawrence gave her invaluable advice about show business: "He pulled me to the side and he said, 'Listen, don't ever let them tell you what you can't have.' Since that day, I've made some of the best deals I've ever made in my career because it keeps ringing in my head. ... It will stay with me forever."[9]

In November 2009, Mo'Nique said, "I own the rights to Hattie McDaniel's life story, and I can't wait to tell that story, because that woman was absolutely amazing. She had to stand up to the adversity of black and white [society] at a time when we really weren't accepted. Mr. Lee Daniels is going to direct it, of course, and I'm going to be Miss Hattie McDaniel. I really hope I can do that woman justice."[14]

Mo'Nique's first play was Eve Ensler's Obie Award-winning production of The Vagina Monologues, in March 2002. Mo'Nique, along with Ella Joyce (Roc); Wendy Raquel Robinson (The Steve Harvey Show and The Game) and Vanessa Bell Calloway (What's Love Got to Do with It), were the first all black celebrity cast to perform The Vagina Monologues. Executive produced by YYP & Associates, LLC, the show was Produced and Directed by noted theater producer/director, Yetta Young, and Producers Lisa D. Washington, Anita M. Cal, and Kellie Griffin.

Mo'Nique is the author of the best-selling book Skinny Women Are Evil: Notes of a Big Girl in a Small-Minded World. She also released a 2006 cookbook called Skinny Cooks Can't Be Trusted.

Mo'nique was part of the Washington, DC, WHUR radio show with George Wilborn.

In 2006 she occasionally filled in for afternoon personality Michael Baisden when his contract with ABC Radio was in the process of getting renewed.[15]

In 2008, Radio One inked a deal for her to get her own radio show, Mo'Nique In the Afternoon (or The Mo'Nique Show) which premiered on several Radio One-owned Urban Adult Contemporary-formatted R&B/soul radio stations in July 2008. The show lasted until March 18, 2009, when Mo'Nique decided to leave to "further her career in television, film, and comedy."[16] 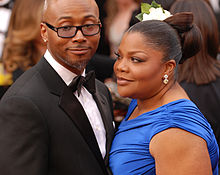 Prior to her current marriage, Mo'Nique was married and divorced twice. She has twin sons Jonathan and David, and another son, Shalon. She and her husband, Sidney Hicks, have what she calls an open marriage, as she mentioned in a profile in The New York Times:

She later clarified her comments on an episode of The Oprah Winfrey Show that aired January 28, 2008. She told Oprah Winfrey that in her prior marriages, she was constantly searching for "that extra oomph".[19] Mo'Nique explained, "When I said I had an open marriage, people automatically jumped to sex. They automatically went there. But I've been best friends with my husband since we were 14 years old. When we say open, we're very honest. There are no secrets. Often times you have people that are married, but they're strangers, and we refuse to be those people".[20] She concluded, "I've had to sneak and I've had to lie, and I don't want to do that any more. But my husband is so awesome and so fine and so—oh, girl....No other man can compare".[20]