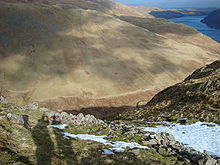 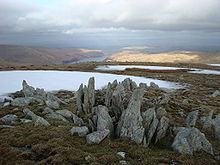 Mardale is a glacial valley in the Lake District, in northern England. The valley used to have a hamlet at its head, called Mardale Green, but this village was submerged in 1935 when the water level of the valley's lake, Haweswater, was raised to form Haweswater Reservoir by the Manchester Corporation. Most of the village's buildings were blown up by the Royal Engineers, who used them for demolition practice. The exception was the small church, which could accommodate only 75 people, and had an all-ticket congregation for its last service. It was then dismantled stone by stone, and the stones re-used to build a small pier and tower along the shore of the reservoir. Some 97 sets of remains were disinterred from the churchyard and transferred to Shap. Alfred Wainwright protested bitterly about the loss of Mardale in his series of pictorial guides to the Lakeland fells, having first visited it in 1930.

In response to the submerging of the village the Manchester Corporation provided an access road that runs for four miles along the south-eastern side of the reservoir to a car park at Mardale Head. From here ascents of the peaks surrounding the head of the valley, such as Harter Fell, High Street and Kidsty Pike may be made.

The abandoned village occasionally re-appears when the water level gets low, only to disappear again when levels rise. This village is the inspiration for the satirical newspaper the Mardale Times.