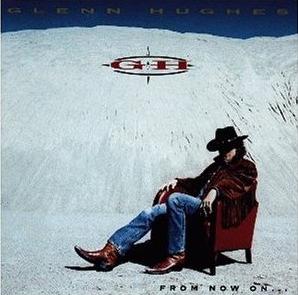 "From Now On…" is a solo studio album by former , and Trapeze bassist/vocalist . It was released in 1994 and had a distinctive AOR sound.

"From Now On…" was Hughes’ second solo release after finding his ‘higher power’ and kicking the drug habits that had marred his career throughout the late 70s and 80s.

The album was recorded in in the Nordic Studio Lab and had its initial release just within that country. It was subsequently released in and America, but is now hard to track down outside of Japan.

It is notable that "From Now On…" is the only Glenn Hughes studio album which features no bass playing from Hughes himself (a situation that apparently made him uncomfortable in Black Sabbath), claiming that he wanted a ‘knees up without the bass’ [http://dmme.net/interviews/hughes1.html] .

Hughes was supported by a band of Swedish musicians including Europe members , and as well as guitarists and . Swedish singer/songwriter also contributed backing-vocals to the track If You Don't Want Me To. The album also featured the songs You Were Always There and Devil In You which were originally written for the abandoned follow up to the "Hughes/Thrall" album.

US and Japanese Bonus Track