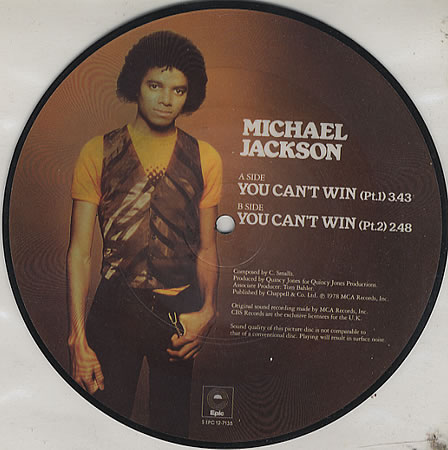 "You Can't Win" is a song performed by American singer in the musical "".

Written by , songwriter for the 1975 Broadway version of "The Wiz", "You Can't Win" was originally intended to be sung in the musical by the Winkies to Dorothy, when she is trapped in the lair of Eviliene the . However, the song was dropped from the musical's score after its Boston tryout.

When began reworking the score of "The Wiz" for Motown/Universal's film adaptation, he asked Smalls to write a new song to replace the Scarecrow's solo "I Was Born on the Day Before Yesterday". Smalls responded by offering "You Can't Win", which was worked into the film as a solo for the character.

However, around the 1978&ndash;1979 era, Michael Jackson recorded a disco-themed version of the song, and basically the -themed version sounded a lot of different than the original version by Jackson. The single reached #81 during a three week stay on the singles chart.