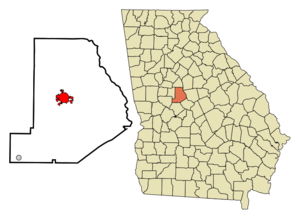 Forsyth is a city in Monroe County, Georgia, . The population was 3,776 at the 2000 census. This number was corrected to read 4,300. The city is the of Monroe CountyGR|6. The city is in the Macon metropolitan area.

It is the former home of .

There were 1,457 households out of which 30.7% had children under the age of 18 living with them, 39.5% were married couples living together, 26.4% had a female householder with no husband present, and 29.5% were non-families. 26.3% of all households were made up of individuals and 13.5% had someone living alone who was 65 years of age or older. The average household size was 2.57 and the average family size was 3.10.

The Monroe County Recreation Department is located at 100 Dan Pitts Drive in Forsyth, Georgia. The Recreation Sports Complex consists of baseball and softball fields, football field, soccer field, batting cages and pitching mounds. Also, located at the Recreation Department are two ponds, a nature trail, tennis court, two pavilions, picnic tables, grill and horse arena. The newest addition to the complex is our new Youth Center. The Youth Center consists of a basketball court, weight room, locker room and a meeting room. SPLOST money was allocated by voters for a new soccer complex but was reintroduced to the city budget by Jimmy Smith, as planned soccer fields will now be shared with football participants, effectively ending all hopes of growth in city/county soccer.

The Recreation Department offers various organized sporting events throughout the year. Starting the year off in January is Basketball season. Basketball is available for you boys and girls ages 7-14 years of age. March marks the start of Baseball/Softball season. Youth ages 3-14 are eligible to enjoy this favorite pastime. During the fall month of September, the Recreation Department offers Soccer and Football/Cheerleading. Soccer is available for girls and boys ages 4-13, whereas football/cheerleading is available for youth ages 5-12. During the summer months youth can attend various summer camps held at the Youth Center as well as enjoy playing free basketball.