Ministry of Internal Affairs (Ukraine)
This article is about the police authority of Ukraine. For the description of policing methods common to post-Soviet states, see Militsiya.

The Ministry of Internal Affairs of Ukraine (Ukrainian: Міністерство внутрішніх справ України, Ministerstvo vnutrishnikh sprav Ukrayiny, MVS) is the main body in the system of central bodies of exeecutive power that provides formation and realization of the state policy in the sphere of protection the rights and liberties of citizens, unlawful acts against the interest of society and state, fight against crime, providing a civil order, ensuring a ccivil security, traffic safety, security and protection of very important persons. It is a centralised agency headed by a Minister of Internal Affairs.

The generic term for the Ukrainian police (and for police in most of the post-Soviet countries) is militsiya.

According to Amnesty International torture and ill-treatment by the militia is widespread in Ukraine.[1] Several militia officers have been arrested for allegedly torturing detainees.[2]

An officer of the ДАI (Highways Police).

The force's name, мiлiцiя, translates roughly into the English language as 'Police', however this is often rendered in English as 'Militsiya' in order to match the original Ukrainian. The force's full name is the same as that of the ministry with which it is linked, Міністерство внутрішніх справ України which translated as 'Ministry of Internal Affairs of Ukraine', however, the full official title of the force is rarely used in speech. On occasion the initials МВС (MVS) may be used to refer to the force.

An individual officer is typically called a мiлiцiонер (militsiyoner) (plural мiлiцiонери) (militsiyonery); these are not, however, official titles and are not included in the official rank structure, they are simply terms used to refer to any militsiya officer regardless of the rank they may hold. A police station is known as відділення міліції (viddilennya militsyii) which translates more or less into English as 'police department'. The term Управління МВС (Upravlinnya MVS) refers to a regional or national police command post.

On the whole, officers' individual ranks are not used by the general public and thus when addressing an officer, it is common to hear the term Пан (female - Пані), Ukrainian for mister/miss used to refer to police officers. On occasion, this may or may not be followed by the term Офіцер (Ofitser).

The Ukrainian militsiya uses a number of different models of automobile which range greatly in age and technical specification.

Ministers of Internal Affairs of Ukraine 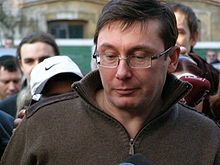 The Ministry of Internal Affairs is headed by a minister who is also, incidentally, recognised as head of the national (state) police service, the militsiya. As a result of this system, many former ministers have previously had experience of serving in the police, and many were, prior to taking up their posts, generals of the militsiya. Typically the minister of internal affairs afforded the rank of Colonel General of Militsiya upon taking up his post in the Ukrainian Cabinet. To this date Yuriy Lutsenko and Vasyl Tsushko are the only former holders of the office who had never served in any of the Ukrainian or, earlier, Soviet law enforcement agencies.

The minister of Internal Affairs is responsible directly to the Prime Minister of Ukraine, to the Ukrainian Parliament (Verkhovna Rada) and ultimately the President of Ukraine. His office is located in Kiev's Pechersk District. 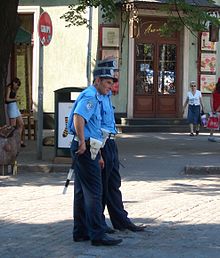 Two officers of the 'ДАI', (Militsiya traffic corps) at work in Odessa. Note: the french-style kepi worn by the officers is part of the traditional summer uniform for the Militsiya in some of Ukraine's southern oblasts.

Ministry has 30 departments and three agencies that are subordinated to it. Minister has up to eight deputies (other than his first deputy) that head the main departments of the ministry.

A uniformed officer of the militsiya guards the German Embassy in Kiev during a non-violent political protest. 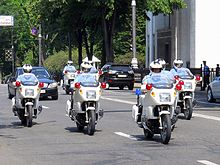 The following is the list of the main departments of the Ministry. In bold are identified departments headeed by ministry deputy.

The Following are constituent departments of the militsiya:

Other departments of the ministry

There are a number of other departments of the Ministry of Internal Affairs which are not directly related to the ministry's role as a civilian law enforcement agency. These are:

Educational institutions of the Ministry 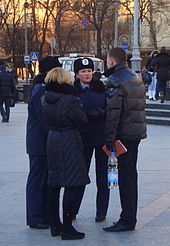 Each university and institute often also has its own base program

Deployments in various UN missions as of November 2009: