The logo of CRSI.

Cryptology Research Society of India (CRSI) is a non-profit scientific organization that supports research in cryptography and security related fields in India. 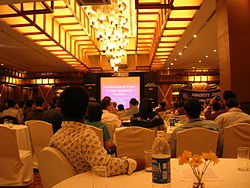 CRSI organizes the annual events INDOCRYPT - an international conference on cryptography [1] and the National Workshop on cryptology [2]. It also arranged International Association for Cryptologic Research's (IACR) workshop FSE (Fast Software Encryption) in 2003 at New Delhi and IACR's conference Asiacrypt in 2005 at Chennai.

The main office of CRSI is located in Kolkata. CRSI was founded by the current general secretary Prof. Bimal Roy of the Indian Statistical Institute. Prof. R.Balasubramaniam, Director of IMSc, is the organization's president.