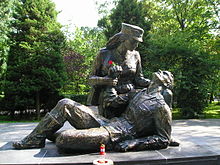 The term military medicine has a number of potential connotations. It may mean:

The significance of military medicine for combat strength can be judged based on the fact that in every single major war fought until the late 19th century disease claimed more soldier casualties than did enemy action. During the American Civil War (1860-65), for example, about twice as many soldiers died of disease as were killed or mortally wounded in combat[1]. The Franco-Prussian War (1870-71) is considered to have been the first conflict in which this ratio was reversed, at least in the German coalition army which lost 3.47% of its average headcount to combat and only 1.82% to disease[2]. In new world countries, such as Australia, the United States and Canada, military physicians and surgeons contributed significantly to the development of civilian health care.[3]