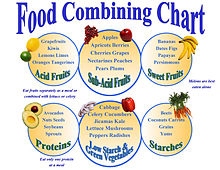 Food combining (also known as trophology) is a term for a nutritional approach that advocates specific combinations of foods as central to good health and weight loss (such as not mixing carbohydrate-rich foods and protein-rich foods in the same meal). One randomized controlled trial study of the efficacy of food-combining for weight loss has been reported in the peer-reviewed medical literature and found no evidence that it was effective.[1] The Hay diet is one type of food combining diet.

Eating habits are often part of a culture and differ among societies, particularly in developed nations where food and leisure time are in abundance. For instance, it is common for French to abstain from drinking nonalcoholic fluids during a meal, saving their water until the end, after dessert. The ritualized nature of a multi-course English (British) meal in Great Britain is another example. Some societies may typically consume sweets before or during a meal rather than at the end as a dessert. In Japan, the order of food and drink or soup consumption is often ritualized. These cultural habits may have evolved to maximize the nutritional benefit of food through improved digestion rather than the more modern food combining objective of weight loss. Alternatively these nutritional impacts of eating culture may be secondary to the social evolutionary component.