The Siege of Jerusalem in the year 70 AD was the decisive event of the First Jewish-Roman War. The Roman army, led by the future Emperor Titus, with Tiberius Julius Alexander as his second-in-command, besieged and conquered the city of Jerusalem, which had been occupied by its Jewish defenders in 66.

The siege ended with the sacking of the city and the destruction of its famous Second Temple. The destruction of both the first and second temples is still mourned annually as the Jewish fast Tisha B'Av. The Arch of Titus, celebrating the Roman sack of Jerusalem and the Temple, still stands in Rome. 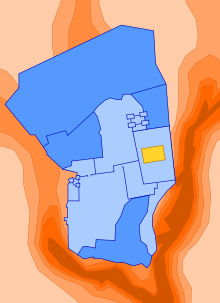 Map of Jerusalem in 70; the Temple is in yellow

Despite early successes in repelling the Roman sieges, the Zealots fought amongst themselves, lacking proper leadership. They lacked discipline, training, and preparation for the battles that were to follow.

Titus surrounded the city, with three legions (V Macedonica, XII Fulminata, XV Apollinaris) on the western side and a fourth (X Fretensis) on the Mount of Olives to the east.[1] He put pressure on the food and water supplies of the inhabitants by allowing pilgrims to enter the city to celebrate Passover, and then refusing to allow them to go out. After Jewish sallies killed a number of Roman soldiers, Titus sent Josephus, the Jewish historian, to negotiate with the defenders; this ended with Jews wounding the negotiator with an arrow, and another sally was launched shortly after. Titus was almost captured during this sudden attack, but escaped.

In mid-May Titus set to destroying the newly built Third Wall with a ram, breaching it as well as the Second Wall, and turning his attention to the Fortress of Antonia just north of the Temple Mount. The Romans were then drawn into street fighting with the Zealots, who were then ordered to retreat to the temple to avoid heavy losses. Josephus failed in another attempt at negotiations, and Jewish attacks prevented the construction of siege towers at the Fortress of Antonia. Food, water, and other provisions were dwindling inside the city, but small foraging parties managed to sneak supplies into the city, harrying Roman forces in the process. To put an end to the foragers, orders were issued to build a new wall, and siege tower construction was restarted as well. 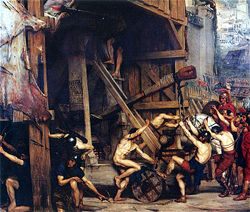 Catapulta, by Edward Poynter (1868). Siege engines such as this would have been used by the Roman army during the attack.

After several failed attempts to breach or scale the walls of the Antonia Fortress, the Romans finally launched a secret attack, overwhelming sleeping Zealot guards and taking the Fortress. Overlooking the Temple compound, the fortress provided a perfect point from which to attack the Temple itself. Battering rams made little progress, but the fighting itself eventually set the walls on fire, when a Roman soldier threw a burning stick onto one of the Temple's walls. Destroying the Temple was not among Titus' goals, possibly due in large part to the massive expansions done by Herod the Great mere decades earlier. Most likely, Titus had wanted to seize it and transform it into a temple, dedicated to the Roman Emperor and to the Roman pantheon. But the fire spread quickly and was soon out of control. The Temple was destroyed on Tisha B'Av, in the beginning of August, and the flames spread into the residential sections of the city.[1]

The Roman legions quickly crushed the remaining Jewish resistance. Part of the remaining Jews escaped through hidden underground tunnels, while others made a final stand in the Upper City. This defence halted the Roman advance as they had to construct siege towers to assail the remaining Jews. The city was completely under Roman control by September 7 and the Romans continued to hunt down the Jews that had fled the city. 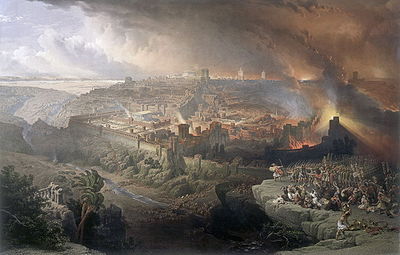 The Siege and Destruction of Jerusalem, by David Roberts (1850). 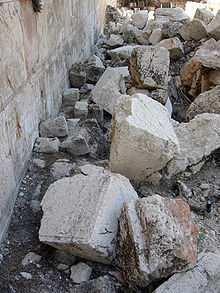 Stones from the Western Wall of the Temple Mount (Jerusalem) thrown onto the street by Roman soldiers on the Ninth of Av, 70

The account of Josephus described Titus as moderate in his approach and, after conferring with others, ordering that the thousand-year-old (at that time) Temple be spared. (Solomon's Temple dated to the 10th century BC, though the physical structure was Herod's Temple, about 90 years old at the time.) According to Josephus, the Roman soldiers grew furious with Jewish attacks and tactics and, against Titus' orders, set fire to an apartment adjacent to the Temple, which soon spread all throughout. However, Josephus may have written this in order to appease his coreligionaries.

Josephus had acted as a mediator for the Romans and, when negotiations failed, witnessed the siege and aftermath. He wrote:

Now as soon as the army had no more people to slay or to plunder, because there remained none to be the objects of their fury (for they would not have spared any, had there remained any other work to be done), [Titus] Caesar gave orders that they should now demolish the entire city and Temple, but should leave as many of the towers standing as they were of the greatest eminence; that is, Phasaelus, and Hippicus, and Mariamne; and so much of the wall enclosed the city on the west side. This wall was spared, in order to afford a camp for such as were to lie in garrison [in the Upper City], as were the towers [the three forts] also spared, in order to demonstrate to posterity what kind of city it was, and how well fortified, which the Roman valor had subdued; but for all the rest of the wall [surrounding Jerusalem], it was so thoroughly laid even with the ground by those that dug it up to the foundation, that there was left nothing to make those that came thither believe it [Jerusalem] had ever been inhabited. This was the end which Jerusalem came to by the madness of those that were for innovations; a city otherwise of great magnificence, and of mighty fame among all mankind.[2]
And truly, the very view itself was a melancholy thing; for those places which were adorned with trees and pleasant gardens, were now become desolate country every way, and its trees were all cut down. Nor could any foreigner that had formerly seen Judaea and the most beautiful suburbs of the city, and now saw it as a desert, but lament and mourn sadly at so great a change. For the war had laid all signs of beauty quite waste. Nor had anyone who had known the place before, had come on a sudden to it now, would he have known it again. But though he [a foreigner] were at the city itself, yet would he have inquired for it.[3]

Josephus claims that 1,100,000 people were killed during the siege, of which a majority were Jewish, and that 97,000 were captured and enslaved, including Simon bar Giora and John of Giscala.[4]

"The slaughter within was even more dreadful than the spectacle from without. Men and women, old and young, insurgents and priests, those who fought and those who entreated mercy, were hewn down in indiscriminate carnage. The number of the slain exceeded that of the slayers. The legionaries had to clamber over heaps of dead to carry on the work of extermination."[5]

Many fled to areas around the Mediterranean. Titus reportedly refused to accept a wreath of victory saying, "there is no merit in vanquishing a people forsaken by their own God."[6]

The Jewish Amoraim attributed the destruction of the Temple and Jerusalem as punishment from God for the "baseless hatred" that pervaded Jewish society at the time.[8] Christians believe that Jesus prophesied Jerusalem's destruction (Mark 13:2) four decades earlier.

The war in Judaea, particularly the siege and destruction of Jerusalem, have inspired writers and artists through the centuries. The bas-relief in the Arch of Titus has been influential in establishing the Menorah as the most dramatic symbol of the looting of the Second Temple.