Alicia Molik (born 27 January 1981) is a Australian professional female tennis player. She reached a career high singles rank of number 8 and also won a bronze medal for Australia at the 2004 Athens Olympics. Molik also reached a career high doubles ranking of number 6, and won two grand slam doubles titles, at the Australian Open in 2005 and the French Open in 2007. She retired from the sport in September 2008, however, announced a comeback in 2009. Molik is currently ranked World No. 206 as of 16 May 2011.

Molik was born in Adelaide, South Australia and currently lives in Perth. She attended Our Lady of Perpetual Succour Catholic Primary School in West Pymble, Sydney, before completing her schooling in Adelaide. She is now married to Tim Sullivan.

She won her first grand slam doubles title at the 2005 Australian Open with partner Svetlana Kuznetsova. She reached the top ten on the WTA tour for the first time in early 2005 following her first Grand Slam quarterfinal singles appearance, at the Australian Open, where she lost 9–7 in the final set to Lindsay Davenport.

Molik won the bronze medal at the 2004 Summer Olympics in Athens in the women's singles competition beating then World Number 3 Anastasia Myskina of Russia in straight sets 6–3 6–4.

She has also won the Zurich Open, a Tier I tournament, defeating Maria Sharapova in the final.

Molik began 2005 by partnering Mark Philippoussis in the Hopman Cup. She then played in the Sydney International, defeating unseeded players the entire way through the tournament before taking the title over compatriot Samantha Stosur in the final, 6–7 6–4 7–5.[1] Molik then played in the Australian Open as the 10th seed. She defeated Anabel Medina Garrigues in the first round, Aiko Nakamura in the second round and Tatiana Panova in the third round to set up a meeting with 8th seed Venus Williams in the fourth round. Molik defeated Williams in straight sets 7–5 7–6 to become the first Australian woman to reach the Australian Open quarterfinals since 1988.[2] Molik then played in her first ever grand slam quarterfinal against top seed Lindsay Davenport. Davenport defeated Molik in a marathon three set match, 6–4 4–6 9–7.[3] Molik then won her first grand slam doubles title with Svetlana Kuznetsova. After the Australian Open, Molik rose into the top 10 in singles for the first time in her career, at No. 10.

Molik then played in the Proximus Diamond Games in Antwerp, making the semifinals before losing to Amélie Mauresmo 6–3 7–6.[4] However, she defeated Mauresmo in the Tier II Qatar Total Open semifinals 7–6 6–1 to set up a meeting with second seed Maria Sharapova.[5] Sharapova defeated Molik in the final 4–6 6–1 6–4. Molik then rose to No. 8 after the tournament.

As the 7th seed at the Tier I Indian Wells tournament, Molik made the fourth round before losing to a returning Justine Henin 6–4 2–6 6–2. This was the second last time in 2005 that Molik won past the first round at a tournament.

After crashing out of the tournament in Amelia Island, to Virginie Razzano 6–4 6–4, Molik took an extended break due to an inner ear infection,[6] which caused her to miss the entire clay court season including the French Open. Molik returned at the grass court season in Birmingham, however, lost in the second round after a first round bye to Laura Granville 6–4 6–2. Molik then took another long break, missing Wimbledon, due to the ear infection.

In late 2005, Molik was diagnosed with vestibular neuronitis, an inner-ear condition caused by a virus that affected her balance, vision and energy level.[8] In October 2005, she announced that she would be taking an extended break through the 2006 season in order to recover. However, her recovery appears to have been faster than expected, and in April 2006 it was announced that Molik would be part of the team for Australia's Fed Cup group matches later that month. However, Australian Davis Cup Captain, David Taylor announced that Molik would not be selected as of lack of match play and rustiness. Instead, rookie Casey Dellacqua took her place.[9]

Molik made her return from the ear infection at the Italian Open in 2006, losing in the first round to Katarina Srebotnik 6–2 6–0, and then lost to Austrian Tamira Paszek 5–7 6–4 6–4 in the first round in Istanbul.[10] Molik then won her first match since returning at the French Open of 2006, reaching the third round after defeating two relative unknowns and then losing to 4th seeded Maria Sharapova 6–0 7–5.[10]

Molik won a wildcard into the 2007 Australian Open by winning the Australian Open Wildcard Play-offs, where she defeated 16 year old Australian Jessica Moore in the final 6–4 6–4. In preparation for the Australian Open, Molik competed in the 2007 Hopman Cup in Perth and scored victories over world No. 6 Nadia Petrova, and Ashley Harkleroad. Molik's final Australian Open warm up tournament was the Moorilla Hobart International were she reached the quarterfinals, beating two higher ranked opponents on her way before losing to doubles partner Sania Mirza. Molik also reached the doubles quarterfinals in Hobart with Mirza, before losing a close match to the number two seeds.

During the Australian Open 2007, Alicia Molik won through her first and second round matches against rising Chinese Taipei's Yung-Jan Chan 6–2 7–6, and Estonian Kaia Kanepi 1–6 6–3 6–2, before losing a 3-setter against the eighth seed Patty Schnyder of Switzerland, 3–6 6–2 6–0.[13] With her impressive 3rd round performance, Molik improved her then-141 ranking to inside the top 100, the first time since withdrawing from numerous tournaments due to that ear infection.

After the Australian Open, Molik reached the second round in Pattya, Bangalore, Dubai and Doha, before playing in Indian Wells, where she reached the third round, losing to 10th seed Ana Ivanović 6–2 6–1.[14] Molik then had three consecutive first round losses, in Miami, Amelia Island and Charleston. She then finally won a match in the clay season, in Strasbourg, before losing to Anabel Medina Garrigues. Molik then competed in the 2007 French Open, losing in the 1st round to 9th seed Anna Chakvetadze 6–2 6–3. However, Molik teamed with Mara Santangelo to win her second Grand Slam doubles title at the French Open.[15]

Molik then played in two Wimbledon warm up tournaments, reaching the second round in Birmingham, however, lost in the first round in Eastbourne to Melanie South 1–6 6–3 7–6. Molik was able to rebound, and easily won her first round match at Wimbledon, defeating Russia's Anastasia Rodionova 6–3 6–2, before losing in the second round to Serena Williams 7–6 6–3.[16] Molik and Santangelo, the sixth seeds in the doubles tournament, made it to the semifinals before losing to eventual champions Cara Black and Liezel Huber. Also competing in the mixed doubles, Molik and partner Jonas Björkman made the final, before losing to Jelena Janković and Jamie Murray.

Molik finished the year ranked 60 in the world, with a 25–24 singles record.

In 2008, Alicia Molik entered the Perth Hopman Cup where she defeated Lucie Šafářová 7–5 6–2 in the first round of the Round Robin competition, before losing to Sania Mirza and Serena Williams in ties involving India and the United States respectively. Her second competition of 2008 was the Medibank International where she again faced Šafářová, Šafářová winning 7–6 7–6. Molik won her opening round at the 2008 Australian Open against Estonia's Kaia Kanepi, before falling to 18 year-old Czech sensation Nicole Vaidišová, 2–6 3–6.

Molik's singles ranking continued to drop due to an elbow problem. Molik lost in the first round of singles qualifying at the French Open and Wimbledon in 2008, and did not win a main-draw match after January 2008. Molik has enjoyed erratic results in doubles, where she partnered Tiantian Sun and defeated Cara Black and Liezel Huber who were the number 1 seeds at the tournament in Sydney. She partnered Mara Santangelo at Wimbledon and the French Open, but fell in the first round of competition. Molik received a wildcard into the 2008 Beijing Olympics which she stated was "the best news I've had since 2004." Representing Australia alongside fellow countrywomen Samantha Stosur and Casey Dellacqua, Molik was ousted in the first round by Spanish María José Martínez Sánchez 6–2, 6–2.

On 5 September, Molik announced her retirement from professional tennis after experiencing nagging leg and elbow problems.[19]

She then started working for half a year as a commentator until she announced her comeback.

On 30 July 2009, Molik announced that she planned to embark on a comeback to tour tennis, claiming to be free of injury.[20] Her first comeback tournament was in the 2009 New Haven doubles event.[21] Molik entered the Women's Doubles at the 2009 Pilot Pen Tennis event as a wildcard with American Meghann Shaughnessy, losing to the Spanish duo of María José Martínez Sánchez and Nuria Llagostera Vives.

Likewise, Molik lost her first round doubles match with Shaughnessy at the US Open against Līga Dekmeijere and Julie Ditty 6–7 (4) 1–6.

In September 2009, Molik entered a $25,000 ITF tournament in Darwin, which she ended up winning in both singles and doubles.

Molik won her doubles with compatriot Casey Dellacqua who is also on a comeback and Molik won her singles over rising star Monika Wejnert 3–6, 6–3, 6–1, and then backed up with a win at the bendigo ITF event. She then won another ITF event in Mildura, and reached the semi-finals of another ITF in Perth. She then made it through to the Australian Open wildcard playoff quarterfinals after winning 3 out of 3 of her round robin matches, however suffered a shock loss to teenager Jessica Moore. 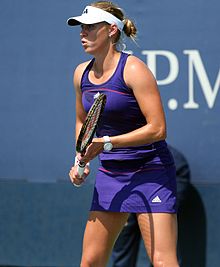 After great success during the last 3 months of the 2009 season in ITF tournaments, Molik started 2010 ranked back inside the top 200.

Molik started her 2010 campaign at the Brisbane International. She defeated Ekaterina Makarova in the first round 6–4 1–6 6–4. In the second round, Molik was made to rethink about her comeback in the WTA Tour, losing to eventual champion Kim Clijsters 6–0 6–3. After the disappointing loss, she travelled to Hobart to play the Moorilla International. In her first round match, she defeated her former doubles partner Sania Mirza in three sets 6–4 2–6 6–3. But just like her results at Brisbane, she lost in a much more tighter second round 7–6 3–6 6–3 to Carla Suárez Navarro. With needing more matches under her belt, she decided to play with compatriot Jelena Dokić in the Doubles Event at the same tournament. However, they lost in a very tight first round match 7–6 6–7 10–2.

Molik took part in both singles and doubles at the Australian Open with Meghann Shaughnessy. In singles, Molik lead 6–3, 5–2 before nerves set in and lost to Julie Coin 3–6, 7–6, 6–3.

Molik then played in Australia's Fed Cup World Group II tie against Spain, however, she lost heavily in the reverse singles to Carla Suárez Navarro 6–1 6–1. Molik then played in the Dubai Tennis Championships, where she defeated Australian Open semifinalist and 16th seed Zheng Jie 6–3 4–6 6–2 in the first round[22] and then lost to fellow qualifier Anna-Lena Grönefeld 6–4 6–4. She then lost in the first round of the Malaysian Open to Alisa Kleybanova 6–1 6–4.[23]

Molik then accepted a wild card into the Premier Mandatory event at Indian Wells. In the first round she defeated Tatjana Malek 6–3 6–1,[24] and then pulled off an upset by defeating the 29th seed Anabel Medina Garrigues 6–4 5–7 7–6. Molik played Elena Baltacha in the 3rd round, she dominated the match with a 6–0, 6–2 victory. She lost to Zheng Jie in the 4th round, In her first round to Miami Molik defeated Ashley Harkleroad in her comeback match 6–1 6–1 in 45 minutes. In doubles, Molik has partnered with the 2009 Sony Ericsson doubles champion Svetlana Kuznetsova. Molik lost in the 1st round of 2010 French Open to Janković 6–0 6–4.

To prevent confusion and double counting, information in this table is updated only once a tournament or the player's participation in the tournament has concluded.

To prevent confusion and double counting, information in this table is updated only once a tournament or the player's participation in the tournament has concluded.