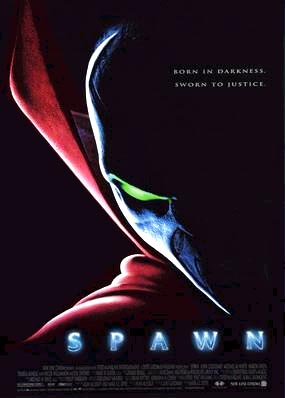 "Spawn" is a of 's creator-owned Image comic book of the same name. It was released in the on , . The film was directed and co-written by (a former animator at ) and executive produced by McFarlane and Alan Blomquist. The movie starred as Al Simmons/Spawn, as Al's demonic guide and antagonist Violator, veteran as the voice of , as the assassin Jessica Priest, as Al's mentor , as Al's widow Wanda Blake, as Wanda's husband , and as , Al's former government employer.

At the government-hosted gala, a red-headed woman briefly walks by who is wearing earrings with the Spawn comic book logo. This cameo, albeit brief, is generally considered to be a nod to the angelic Spawn-hunter Angela. Despite her popularity in the comic series, she may have been absent from the film because of ongoing legal disputes between Spawn creator and , who was hired as a guest writer for Angela's debut issue, "Spawn" #9. Also, two detectives resembling arrest towards the end of the film.

Although the film was based on the comic book series, some details were changed for the theatrical version of Spawn. , Al Simmons's best friend, in his former life, was a black man in the comic, was played by , a white man, in the film. McFarlane has explained that this was done by the studio to avoid having too many black leads and creating a perception the film was aimed at just a black target audience. Fact|date=February 2007. Also, in the comics Cyan is clearly Terry's daughter, introduced in the third issue as being roughly a year and a half. As Al was in hell five years it is impossible for him to be Cyan's father. In the movie is greatly implied that the reverse is true. Lastly the comic had Al striking Wanda, however the movie did not.

It is also revealed in the film that , a white woman, was Al Simmons's murderer. In the comic book series, however, Al Simmon's murderer was originally Chapel, a black male character originally created by for the comic Youngblood. However, due to the eventual severing of professional ties between Liefeld and McFarlane, the story may have been altered for the purposes of the film. Chapel remained in the "Spawn" television series, which premiered on months before the film was released. Additionally, it was later revealed in the comic book series, in a case of questionable , that Jessica Priest was indeed Al Simmons's murderer after all. Also in the film, Simmons worked for an agency called A6, while in the comic book he worked for the .

The nature of Spawn's powers and allies are also different. Cogliostro, for example, while revealed to be Cain in the comics, is here portrayed as an assassin for the church in the fifteenth century, who has forsaken most of his Spawn-based powers apart from a blade that comes from his right wrist and is his favored weapon in battle. Also, while Cogliostro does warn Spawn that he will die if his powers are drained, no reference is ever made to Spawn possessing a 'counter' like in the comics, which makes the precise limits of Spawn's powers unclear.

"Spawn" featured, for its time, impressive special effects courtesy of . Though it received mixed reviews, it was considered a modest box-office success, earning $54.9 million domestically, a little over $87 million worldwide.

There are two versions of the film, the PG-13 version and the R-rated Director's Cut. and 10th Anniversary Collectors Edition versions were released in late 2007.

The video title is "" and is [http://www.youtube.com/watch?v=jinKMAuWFoQ here] on .

Play the "Special Features" side of the disc. Select the "More" option. Select the "Spawn Soundtrack" option. Press the "Right Arrow Key" and a graphic appears over the band names. Press Enter/OK to access the building with 3 doors. Choosing the middle door plays the video. The 2 outer doors show animations when either is chosen.

A sequel, tentatively titled simply "Spawn 2", has been in since 1998.

"Spawn: The Album" was released in July 1997 and brought together popular rock bands at the time including , , , Marilyn Manson and with well known DJs and electronic producers such as , , and . A similar concept was previously implemented on the rock/hip-hop fused "Judgement Night" soundtrack. The album debuted at #7 on the U.S. and stayed in the chart for 25 weeks. The album is certified Gold for selling over 500,000 copies in America.Fact|date=August 2008

There are several limited editions of the soundtrack.Fact|date=August 2008 A US version featuring different cover artwork, an Australian version featuring yet another cover (with the same image as on "Spawn" #39) plus a bonus track "This Is Not A Dream (UK Mix)" by & Morphine; and a Japanese version with identical cover as the Australian, including a bonus disc containing three remixes and the bonus track from Australian version. The McFarlane Collector's Club also made an LP release available to members featuring the standard album art and translucent red discs.