Bromoform (CHBr3) is a pale yellowish liquid with a sweet odor similar to chloroform, a halomethane or haloform. Its refractive index is 1.595 (20°C, D). Bromoform is produced naturally by phytoplankton and seaweeds in the ocean and this is thought to be the predominant source to the environment.[1] However, locally significant amounts of bromoform enter the environment formed as disinfection byproducts known as the trihalomethanes when chlorine is added to drinking water to kill bacteria. It is somewhat soluble in water and readily evaporates into the air. Bromoform is a confirmed animal carcinogen; (ACGIH 2004). Carcinogen category: 3B; (DFG 2004).

Bromoform can be absorbed into the body by inhalation and through the skin. The substance is irritating to the respiratory tract, the eyes, and the skin, and may cause effects on the central nervous system and liver, resulting in impaired functions. It is soluble in about 800 parts water and is miscible with alcohol, benzene, chloroform, ether, petroleum ether, acetone, and oils. Its LD50 is 7.2 mmol/kg in mice, or 1.8g/kg.

It can be prepared by the haloform reaction using acetone and sodium hypobromite, by the electrolysis of potassium bromide in ethanol, or by treating chloroform with aluminum bromide. 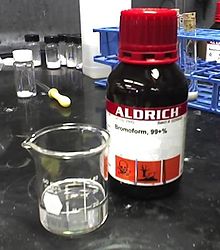 A bottle of bromoform with some in the adjacent beaker

Only small quantities of bromoform are currently produced industrially in the United States. In the past, it was used as a solvent, sedative and flame retardant, but now it is mainly used as a laboratory reagent.

This ability of bromoform to support the weight of some solids is explained by the laws of buoyancy. A solid will float in a liquid if its density is less than that of the liquid. Likewise, a solid will sink if its density is more than that of the liquid. If a liquid is to be used to separate minerals according to their densities, it should have a density that is in between that of the minerals. Bromoform has a high density compared to that of other liquids, and so it is ideal for this application. If the density of bromoform is slightly too high, then it can be brought down by mixing it with a small amount of fully miscible liquid of lesser density.