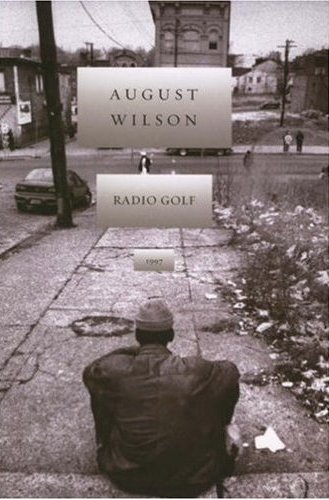 "Radio Golf" is a play by American , , the final installment in his ten-part series, "The Pittsburgh Cycle". It was first performed in 2005 by the in and staged its Broadway premiere on 8 May 2007 at the in .

Harmond Wilks, an Ivy League-educated lawyer with an educated and ambitious wife, wants to redevelop the "blighted" area of the in .

Having inherited a prosperous real estate firm from his father and grandfather, Wilks is about to declare his candidacy to be Pittsburgh's first black mayor. Meanwhile, he and his friend Roosevelt Hicks are engineering a development deal on Wylie Avenue to build a apartment building with a ground floor filled with high-end chain stores like , , and .

The deal depends on federal money, which requires a finding that the area is blighted. There are offstage city politics and backroom deals. Harmond and Roosevelt, a newly-minted vice president, think they are equal competitors in capitalism's public-private arena, but they may just be black front men for white money.

Suddenly another world intrudes when an old mansion at 1839 Wylie they have slated for demolition turns out to have a significant past. It was the home of Aunt Ester, the hereditary folk priestess whose tale goes back to 1619, when the first shipload of African slaves was brought to Virginia.

The staging at the , was also the place where Wilson's first Broadway play, "," opened in 1984. Chicago's is the first to mount a production of the complete ten play "The Pittsburgh Cycle" with the closing of "Radio Golf" in early 2007.