Mihály Munkácsy (originally Michael von Lieb;; February 20, 1844 – May 1, 1900) was a Hungarian painter, who lived in Paris and earned international reputation with his genre pictures and large scale biblical paintings.

Munkácsy was born Michael von Lieb to German parents in Munkács, Kingdom of Hungary, the town from which he later gathered his pseudonym. After being apprenticed to itinerant painter Elek Szamossy, Munkácsy went to Pest, the capital city, where he sought the patronage of some established artists. With the help of the landscapist Antal Ligeti he received a grant from the state so he could study abroad. In 1865 he studied at the Academy of Vienna under Karl Rahl. In 1866 he went to Munich to study at the Academy, and in 1868 he moved to Düsseldorf to learn from the popular genre painter Ludwig Knaus. In 1867 he travelled to Paris to see the Universal Exposition. After this trip his style became much lighter, with broader brushstrokes and tonal colour schemes - he was probably influenced by modern French painting seen at the Exposition. 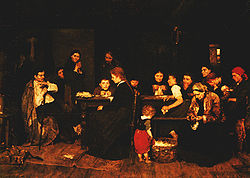 In the early years of his career Munkácsy painted mainly scenes from the daily lives of peasants and poor people. First he followed the colourful, theatrical style of contemporary Hungarian genre painters (e. g. Károly Lotz, János Jankó), for example in The Cauldron (1864) or Easter Merrymaking (1865). In the next years he started to pay more attention to the landscape into which he placed his figures (Storm in the Puszta, 1867). From the Düsseldorf genre painters he learnt to represent different emotions in his figures and to treat them as a group (The Last Day of a Condemned Man, 1869).

Munkácsy went on in this direction and painted genre pictures like Making Lint (1871) and Woman Gathering Brushwood (1873). At the end of the 1870s he also worked in Barbizon, together with his friend, the Hungarian landscapist László Paál, and painted fresh, richly coloured landscapes. In 1878 he painted a historical genre picture, The Blind Milton Dictating Paradise Lost to his Daughters, which marked a new milestone in his oeuvre. This scene is set in the past and in a richly furnished room. The picture was bought (and successfully sold) by Austrian-born art dealer Charles Sedelmeyer, who offered Munkácsy a ten-year contract. This deal made Munkácsy a wealthy man and a really established member of the Paris art world. Sedelmeyer wanted him to paint large-scale pictures which could be exhibited on their own. They decided that a subject taken from the Bible would be most suitable. In 1882 Munkácsy painted Christ in front of Pilate which was followed by Golgotha in 1884. The trilogy was completed by Ecce Homo in 1896. These huge paintings were taken on a tour and exhibited in many European cities and also in the US by the art dealer Charles Sedelmeyer. All three were bought by American millionaire John Wanamaker who exhibited them in his department store in Philadelphia every Easter. (Today all three can be seen in Debrecen, Hungary.)

Munkácsy did not abandon genre painting, but his settings changed. In the 1880s he painted many so-called salon pictures: scenes set in lavishly furnished rooms in the homes of rich people. His most often depicted subjects were motherhood (Baby's Visitors, 1879), the happy moments of domestic life (The Father's Birthday, 1882), children and animals (Two Families in the Salon, 1880). His elegantly dressed, dainty young women also appear in landscape settings (Three Ladies in the Park, 1886). These pictures were extremely popular (especially among American buyers) and fetched great prices. Beside these urban subjects Munkácsy also continued to paint rural scenes and dramatic, intensely emotional landscapes.

The Last Day of a Condemned Man 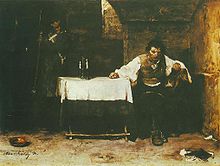 In 1869 Munkácsy painted his much acclaimed work The Last Day of a Condemned Man. This is considered his first masterpiece. The picture was rewarded with the Gold Medal of the Paris Salon in 1870. It made Munkácsy a popular painter in an instant and encouraged him to move to and settle in Paris. Ironically enough this work summarises torture caused by oppression, moral uncertainty and reactions to an impending tragic end in visual form. However, it aptly captures the capabilities of the Hungarian master in painting. Unfortunately he responded to material success and focused on works with high and immediate market value.

A painter, a celebrity

Unlike many other painters, Munkácsy was very conscious about earthly comfort and social prestige. Over the years he became quite a celebrity.

Munkácsy started to paint during the years he spent in Arad as a joiner. With the help of patrons, he studied at the Viennese, Munich and Düsseldorf academies. He painted his first major work, the outstanding "The Condemned Cell" in Düsseldorf, in 1872, together with his friend László Paál, he moved to Paris, where he lived until the end of his life. Munkácsy painted his genres in the style of realism between 1873 and 1875: "Midnight Ramblers", "Farewell". "Churning Woman", "Woman Carrying Brushwood", and "Pawnshop" were the zenith of his career. He married the widow of Baron de Marches in 1874, and his style changed from that time on. Departing from the typical subjects of realism, he produced colourful salon paintings and still lifes. This was the period when he also turned to ladscape painting; his growing interest is marked by such great paintings as "Dusty Road". "Corn Field", and "Walking in the Woods". The assimilation of László Paál's style is apparent in the landscapes painted during the 1880s, such as "Avenue" and "The Colpach Park". His realist portraits - e.g. of Franz Liszt and Cardinal Haynald - were also born around this time, together with his religious paintings, such as "Christ in front of Pilate", "Golgotha" and later, "Ecce homo".

Towards the end of his career he painted two monumental works: "Hungarian Conquest" for the House of Parliament and a fresco entitled "Apotheosis of Renaissance", for the ceiling of Kunsthistoriches Museum in Vienna. 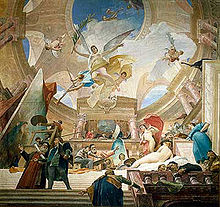 Glorification of the Renaissance, ceiling paiting of the grand staircase of the Kunsthistorisches Museum in Vienna (1888)

He was commissioned to paint the large ceiling painting of the Kunsthistorisches Museum in Vienna. The work was titled Glorification of the Renaissance. 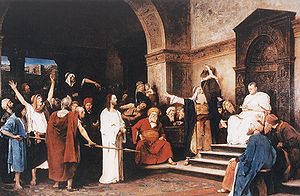 Munkácsy was an over-sensitive person who was always unsure and always questioning his own talent. By the 1890s his depression grew into a severe mental illness which was probably intensified by the syphilis he caught in his youth. His last pictures are troubled and sometimes even bizarre (Victim of Flowers, 1896).

Towards the end of his life when disease was demanding more and more of his energy and finally darkness descended on his mind, he accomplished two pictures involving several figures, one is Strike (1896) where he illustrated the subject of the picture, rather unusual at his time, in a new style of character portrayal with the old passionate approach only superficially present.

It was the summer of 1896 when Munkácsy's health sharply declined. After treatment in Baden-Baden, he was retired to Colpach and Paris. Later he was taken to a mental hospital at Endenich near Bonn. He collapsed and died there. On 9 May he was laid to eternal rest in Kerepesi Cemetery.

Nineteenth century visual art or the historical developments of Hungarian art cannot be discussed without considering Munkácsy 's lifework. His works are considered the apogee of national painting. He was a standard-setter, an oeuvre of reference value. He was one of the few with whom the antiquated colour techniques of 19th century Austro-Hungarian painting reached its most powerful and most lavish expression.[1]

In 2005, the Hungarian National Gallery organized in Budapest the first ever comprehensive exhibition of Munkácsy's paintings scattered throughout the world. As many as 120 pieces were borrowed from different institutions, museums and private collections. The exhibition catalogue published on the occasion, entitled Munkácsy a nagyvilágban (Munkácsy in the World) also included a number of reproductions of his paintings. The three-month exhibition was a feast for Hungarians who had little access to original works of Munkácsy. Paintings by Munkacsy can be seen at the Milwaukee Art Museum, Dayton Institute of Art(Ohio) and the Albany New York Museum of Art and History. There are also paintings by Munkacsy in the Arad Art Museum (Romania) and the Ferenc Mora Art Museum (Szeged, Hungary).