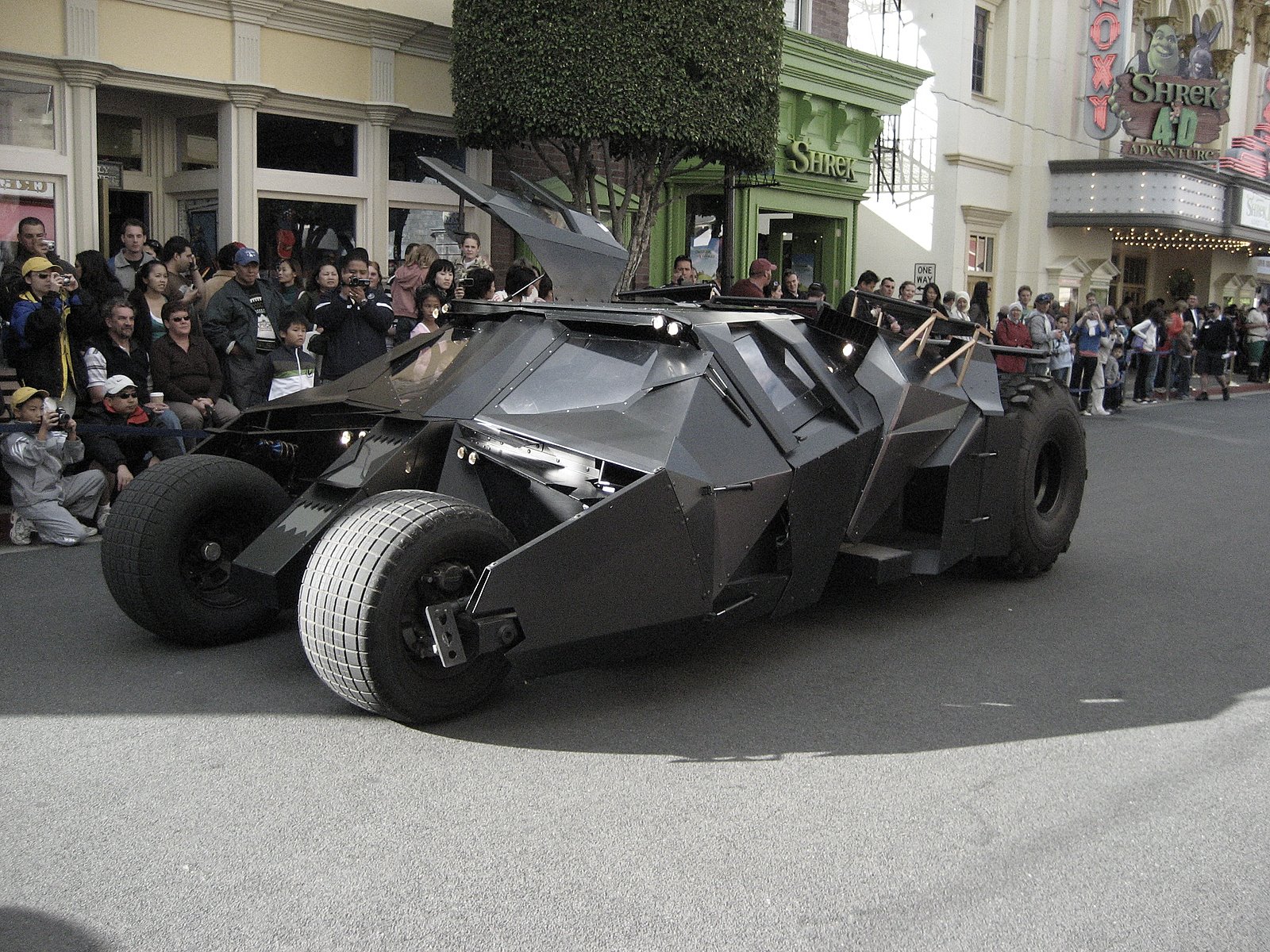 However, amongst fans, the spinners featured in Director Ridley Scott's "" are most commonly suggested when referring to the influences of the Tumbler's design. Reportedly, Director Christian Nolan is also a fan of "". The film's described the machine as being a cross between a and a . In the various interior sequences of the Batmobile/Tumbler being driven, it appears to drive like a boat, based on throttle placement, use, and construction.

Five individual Batmobiles were built for filming in the movie, each with a special purpose to meet the various stunt needs of the film: two regular, full-size driving Batmobiles for exterior shots; one full-size model with hydraulics for the jump sequences; one full-size functional vehicle with propane tanks to fuel the rocket blast out of the rear nozzle and a 1/3-scale radio-controlled electric model for the most involved stunts in the film (e.g. the roof-top chase sequence). The scale model scenes were filmed on a massive set built on a stage at in England over the course of nine weeks. The full-sized vehicles were driven and filmed on the streets of Chicago. In the sequel to Batman Begins the ejects from the tumbler, with the tumbler's front wheels as the Batpod's wheels.

In "Batman Begins", Bruce Wayne acquires a mothballed military vehicle, called the "Tumbler", to serve as his . Originally sporting paint, Bruce Wayne requests to have the Tumbler painted black. The vehicle that he creates is never referred to as the "Batmobile."

Later on in the film, Dr. Jonathan Crane poisons after showing her that his toxin, which is revealed to only be harmful in vapor form, was being piped into Gotham's water supply. She is eventually saved by Batman. The police enter and arrest Crane while Batman escapes with Rachel in his car.

Afterwards, Batman battles aboard a train, then escapes just as Jim Gordon, who then drives the Batmobile under Batman's direction, launches a missiles from it, leading Ra's to crash with the train to the ground.

Role in "The Dark Knight"

The vehicle in the Dark Knight is never referred to as a "batmobile",the Tumbler makes its appearance at a car park, where it is remotely controlled by Batman to fire at some cars to intimidate the Scarecrow and a Russian mobster before the Dark Knight himself appears on the scene. Despite failing to stop the Russian mobster from escaping, he successfully catches the Scarecrow and a group of Batman impersonators.

Later in the film, as Harvey Dent is being escorted across the city, the convoy is attacked by The Joker and his gang, who destroy all of the police vehicles except for the armored car carrying Dent. At that moment, the Tumbler appears, destroying a garbage truck driven by one of the Joker's goons via head-on collision. Batman then runs the Tumbler full-speed between the Joker's truck and the armored car, receiving the brunt of a fired by the Joker which catastrophically damages the Tumbler. Batman engages its escape mechanism, converting the front wheels into the before the rest of the vehicle self-destructs.

* Length: convert|15|ft|sigfig=3
* Width: convert|9|ft|4|in|sigfig=3
* Weight: convert|2.5|ST
* Acceleration: 0-60 in 5.6 seconds. Under full acceleration, the car could actually rise up on its front "legs" while the front wheels stayed planted on the ground creating an effect like a giant spider.
* Engine [ [http://www.chickslovethecar.com/tumbler.asp?mode=jet Bale Car - Jet Burner] ] : 5.0 liter Vauxhall/GM engine capable of 500 horsepower. The jet engine and vector controls could jump up to 6 feet vertically.
* Fuel: The "jet engine" on the back of the car was fed by propane tanks.
* Tires: Super swampers tires standing 44 inches tall (via titanium axles).

Nathan Crowley, one of the production designers for "Batman Begins", started the process of designing the Tumbler for the film by model bashing. One of the parts that Crowley used to create the vehicle was the nose cone of a model to serve as the chassis for the Tumbler's jet engine. Six models of the Tumbler were built to 1:12 scale in the course of four months. Following the scale model creation, a crew of over 30 people, including Crowley and engineers Chris Culvert and Annie Smith, carved a full-size replica of the Tumbler out of a large block of , which was a process that lasted two months.

The Styrofoam model was used to create a steel "test frame", which had to stand up to several standards: have a speed of over 100 mph, go from 0 to 60 mph in 5 seconds, possess a system to make sharp turns at city corners, and to withstand a self-propelled launch of up to 30 feet. On the very first jump test, the Tumbler's front end collapsed and had to be completely rebuilt. The basic configuration of the newly designed Tumbler included a 5.7-liter Chevy , a truck axle for the rear axle, front racing tires by Hoosier, rear 4x4 mud tires by Interco., and the suspension system of Baja racing trucks. The design and development process took nine months and cost several million dollars.

With the design process completed, four street-ready race cars were constructed, with each vehicle possessing 65 panels and costing $250,000 to build. Two of the four cars were specialized versions. One version was the flap version, which had hydraulics and flaps to detail the close-up shots where the vehicle propelled itself through the air. The other version was the jet version, in which an actual jet engine was mounted onto the vehicle, fueled by six tanks. Due to the poor visibility inside the vehicle by the driver, monitors were connected to cameras on the vehicle body. The professional drivers for the Tumblers practiced driving the vehicles for six months before they drove on the streets of Chicago for the film's scenes.