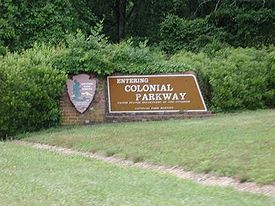 With portions built between 1930 and 1957, the Colonial Parkway joins the three communities with a scenic and bucolic roadway carefully shielded from views of commercial development; a major effort has also been made to keep traffic signs and other modern roadside items to a minimum, and make them unobtrusive where unavoidable. This helps visitors mentally return to the past, and there are often views of wildlife and waterfowl in addition to the river panoramas near each end.

The roadway, a National Scenic Byway and All-American road (one of only 27 in the U.S.), is free of trucks and is a popular (but not the quickest) way to move by motor vehicle between the three points, especially for tourists. Near the James River and York River ends of the parkway, there are several pull-offs. It is toll-free, and has moderate speed limits.

The Colonial Parkway took over 25 years to create from concept to completion. In 1930, a survey of the area was undertaken by National Park Service (NPS) engineering and landscape architect professionals for a 500-foot (150 m) right-of-way for the parkway.

Between Yorktown and Williamsburg, the initial proposals called for the parkway to follow an inland route along colonial-era roads. However, instead, it was decided to align the road along the York River through U.S. Navy land to avoid grade crossings, extensive tangents, modern intrusions and other "visual junk". This land included the Naval Weapons Station (Yorktown) and the former E.I. DuPont explosives factory and town complex at Penniman, Virginia which later became known as Cheatham Annex.

Following the parkway concept of Calvert Vaux and Frederick Law Olmsted, designers of New York City's Central Park, the planners of the Colonial Parkway used a model of a limited access highway with broad sweeping curves, set in a meticulously landscaped right-of-way devoid of commercial development. These features, derived from 19th-century Romantic landscape theories, created a safer and more pleasant drive compared to the increasingly congested urban strips. In addition to protecting the views, culvert headwalls and parkway underpasses were clad in antiquated "Virginia-style" brick laid in English and Flemish bonds to promote a "colonial-era" effect. Design features such as molded coping rails, string courses and buttresses followed the historical prototypes found at Williamsburg.[1] 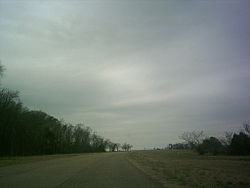 The Colonial Parkway between Yorktown and Williamsburg

The land for ten miles (16 km) of the route between Yorktown and Williamsburg was given to the NPS free of charge, and construction began on first on this portion. By 1937, the road was completed to just outside Williamsburg. There was some debate over the routing in the Williamsburg area, and eventually a tunnel was selected.

The tunnel under the historic district of Colonial Williamsburg was completed by 1942, but opening was delayed by World War II and some structural and flooding problems. It finally opened for traffic in 1949, leaving only the Williamsburg-to-Jamestown section to be built.

During the early 1950s in anticipation of the 1957 350th anniversary of Jamestown's founding, the park finalized plans to complete the parkway, still following the high design standards. Several long fills were required near the James River and workers rebuilt the isthmus to Jamestown Island which had been severed by weather since the colonial days when Jamestown was actually a peninsula. Other major improvements at the southern terminus included development of Jamestown Island as part of the Colonial National Historical Park and the adjacent Jamestown Festival Park, which was largely state-funded by Virginia.

On April 27, 1957, the Colonial Parkway was opened for traffic along the entire route between Yorktown and Jamestown. Queen Elizabeth II of Great Britain and her consort Prince Philip made a state visit that year on October 16. It has enjoyed popular use by tourists to one of the world's most-visited areas ever since.

The Colonial Parkway has been carefully maintained. This also has not been an easy task. Priority is given wetlands ecosystems and the natural growth as well as wildlife and waterfowl preservation. The scenic shoreline areas along the two major tidal rivers present extra challenges with many bridges and fills. Occasionally, East Coast hurricanes such as Hurricane Isabel in 2003 inflict significant natural damage, and require closure of portions of the Parkway for repairs.

It has also been necessary to zealously protect the Parkway from commercial intrusions, especially as the Virginia Peninsula's resident population has more than tripled since 1930, and tourism has greatly increased. Improvements such as the overpass crossings of busy Interstate 64 and upgrades of State Route 199, a semi-circular Williamsburg beltway, and U.S. Route 17 at Yorktown, all major traffic arteries, were accomplished in a manner so as to be virtually unnoticeable to travelers along the Parkway. Even the CSX Transportation railroad line which crosses with Amtrak service to Williamsburg and Newport News is carefully shielded from view. 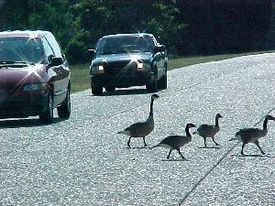 Canada geese as pedestrians have the right-of-way on the Colonial Parkway. The unusual unmarked pavement seems to have three lanes, with signs which warn "Passing With Care". Traffic safety for the wildlife and tourists on the low speed Parkway is provided by United States Park Police.

The Colonial Parkway is free of trucks and commercial vehicles except passenger-carrying buses. The lower speed limits and few exits combine to help preserve the road for tourists and protect wildlife by making it an unattractive short-cut for most local traffic and commuters. The unmarked pavement is made of rounded "river gravel" set in a concrete-mix, providing an unusual earth tone color. Since the Parkway is intended primarily for sightseeing, and only secondarily as a through route to the historic points, there are many pull-offs with markers giving brief descriptions of the view.

The Parkway has no painted traffic lane-marking lines (presumably to enhance the historical feeling). Some stretches are posted "Pass With Care", but it is important to be vigilant for oncoming traffic which may also pass and share the center of the roadway. The more popular pull-offs are near the James River and York River ends of the parkway, where there are panoramic views across each river. The moderate speed limits and safety (for all creatures) are well-protected by National Park Service law enforcement rangers. Despite a federal policy instituted late in the 20th century of requiring user fees at many National Parks and Monuments, the Colonial Parkway has remained toll-free.

On Saturday, November 26, 1977, Law Enforcement Ranger Gregory Burdine was killed in the line of duty while in pursuit of a vehicle on the Parkway. During the pursuit, Burdine's patrol vehicle crashed into two trees at an estimated speed of 100 m.p.h. A suspect was later arrested and convicted of involuntary manslaughter and evading a police officer, and sentenced to 15 months in prison.[1]

The western end of the parkway begins at Jamestown, where the colony was also begun in 1607 on the shore of the James River. Some visitors begin their experience by approaching the entire area from the south via State Route 10 to Surry, and then across the James River and arriving by water on the Jamestown Ferry. Passengers can get out of their automobiles during the 15-minute ride and usually see the Jamestown Island much as the first colonists may have approached it. In fact, the replicas of Christopher Newport's three tiny ships, Susan Constant, Godspeed, and Discovery, are docked near the northern ferry landing. 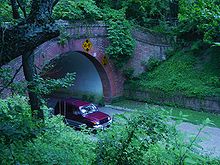 The middle point of the Parkway is Williamsburg, where the capital of the colony was moved from Jamestown in 1699. The parkway tunnels under the historic district, a good example of the care taken to preserve the ambiance of the restored area. The tunnel under the Colonial Williamsburg historic district was not originally planned. It arose as an innovative solution over two potential surface road alignments, each of which had significant opposition. Largely due to the 20th century preservation efforts of the Reverend Dr. W.A.R. Goodwin, rector of Bruton Parish Church, and the generosity of Standard Oil heir John D. Rockefeller Jr., today Colonial Williamsburg is a large living museum of early American life. It has dozens of restored and recreated buildings and reenactors. It is one of the most popular tourist destinations in the world.

The Visitors Center (right off the Colonial Parkway) features a short movie and is an excellent place to start. It is also a good place to park automobiles, which are restricted from the restored area. Wheelchair-accessible shuttle bus service is provided from the Visitors Center. From the Williamsburg exits of the Parkway, commercial areas of lodging, fuel, food, etc. are easily accessible as well.

The eastern end of the Parkway is Yorktown where General Cornwallis surrendered to George Washington in 1781, ending the American Revolution. There are two large visitor centers, each with a different theme, several extensive battlefield drives, and a waterfront area.

The parkway was closed through Navy lands near Yorktown during World War II. New utility lines and access roads were built across the parkway to serve defense needs and the road was used for convoy training. In 1945, the U.S. Navy agreed to halt all transports on the parkway and help in the restoration of the landscape destroyed during three years of wartime use.