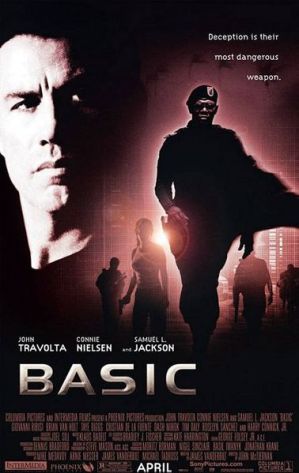 A helicopter circles over the Panamanian jungle. On board is a team of trainees and their commander, Sergeant Nathan West (). Their objective is to move through the jungle while a hurricane rages above, use live fire to hit pop-up metal targets, then rendezvous at a small bunker.

Seventeen hours later, a Ranger later identified as Ray Dunbar emerges from the jungle carrying one of his wounded comrades, Levi Kendall, on his back. We then see another soldier walk out of the jungle and shoot at Dunbar. This soldier, later identified as Meuller, is killed in self-defense by Dunbar. Apparently, the mission has gone horribly wrong. The rest of the team, and West, are presumed dead.

At the base interrogation room, Captain Julia Osborne () makes little headway with Dunbar, who refuses to talk. Dunbar is given a pad of paper and pen and he writes that he will only speak to a fellow Ranger, someone from outside the base, and draws a mysterious "8" on the piece of paper. Noticably spooked upon seeing the 8, base commander Bill Styles () calls in an experienced interrogator and friend, Tom Hardy (). Hardy is an ex-Ranger and current DEA () Agent who is presently under investigation for bribery. We also find out that Hardy served under West when he was a Ranger. Hardy and Osborne, initially wary of each other, are forced to work together during the 6 hours they are given before the CID transportation from Washington will arrive to take Dunbar and Kendall away to initiate an investigation. Styles wants the investigation kept quiet.

We find out through Dunbar that Sergeant West is infamous for being a ruthless, tough-as-nails commander. One cadet in Dunbar's unit, a black soldier named Pike, earned West's wrath more than any other. Pike was selected for the Panama training mission along with Dunbar, Kendall, Mueller and two other soldiers, Nuñez and Castro. Since he seemed to have plenty of reason to hate West, it is suggested that Pike had enough motive to murder him.

At this point, Dunbar refuses to say anything more.

Hardy and Osborne then go see the other surviving team member, Levi Kendall, who is in the hospital recovering from gunshot wounds sustained during the mission. It is revealed that Kendall is the son of one of the . At the hospital, Hardy runs into Dr. Peter Vilmer (), an old friend. Apparently, Vilmer is also Osborne's on-again, off-again lover.

Kendall reveals to Hardy and Osborne that he is a homosexual, and claims that West hated him because of it. Kendall also claims that West silently threatened his life in the helicopter, shortly before the mission began. Kendall was partnered with Castro for the mission and he says he feared that West may have bribed Castro to give him a "training accident".

Kendall claims that West was killed by being hit in the back with a white phosphorus grenade, and that Pike confessed to the crime, thinking that his comrades would go along with it. However, the team decided to turn Pike in when they would be picked up the next morning. In the middle of the night, Pike tried to rouse Kendall's sympathies by playing to their mutual hatred of West. Pike proposed they kill Mueller and Nunez and convince Dunbar and Castro to back them up. Kendall dismissed Pike's suggestion then went back to his sleeping area, but later spotted Pike whispering to Dunbar. According to Kendall, Dunbar then went back to his bag, extracted his pistol and aimed it at the sleeping Mueller. Kendall warned him which allowed Mueller to deviate the shot and it struck Castro. When Castro was hit, his finger pulled the trigger on his machine gun and the rounds struck Nunez, Kendall and Pike. Nunez and Pike were killed and Kendall was wounded. Dunbar then carried the wounded Kendall on his back through the jungle, exchanged fire with Mueller, and was picked up, as seen in the beginning of the movie. When asked why Dunbar would go through all the trouble of carrying him out of the firefight, Kendall suggested that perhaps Dunbar expected him to cover for him in gratitude.

Dunbar, upon further questioning, says that Kendall is lying and proclaims that he didn't shoot West. However, Kendall said earlier that West was killed with a phosphorus grenade, Kendall never said anything about West being shot.

Dunbar also claims that Mueller and Kendall were selling prescription drug injection kits called "combat cocktails" which help dull physical pain and sharpen the mind, and that Mueller shot West because West was aware of their drug dealing. Dunbar claims that Mueller then used Pike's grenade, which he had stolen from his pack earlier. Back at the bunker, Mueller tried to pin the blame on Pike, but when Pike began pointing out evidence that threw suspicion on Mueller, a fierce argument began and Mueller shot Pike in the head. A firefight broke out in the bunker and Castro and Nunez were killed. Dunbar rescued Kendall with the intent of turning him in, hiked through the jungle, killed Mueller and was picked up by the helicopter.

At Hardy's request, Dunbar provides proof of the alleged drug-dealing operation. He also says that it was Vilmer who supplied the drugs to Mueller and Kendall.

When Osborne and Hardy return to the hospital, they speak briefly with Dr. Vilmer. After a short interrogation, during which Osborne breaks his nose with a phone book, Vilmer admits that he distributed to Mueller and Kendall and that he falsified drug tests so that the soldiers would come up clean. Vilmer is placed under arrest.

Hardy and Osborne then go to confront Kendall, who is acting very strangely and refuses to give them any useful information. However he still claimed that Dunbar was the guilty party. After a few minutes, Hardy notices that Kendall is bleeding out of his ears. Suddenly, Kendall starts vomiting blood and then abruptly dies. However, right before Kendall dies he uses his blood soaked finger to draw what Osborne initially interprets as the symbol for , but shortly after, she realizes it is an 8. She shows this to Hardy, who first denies knowing what the 8 may symbolize. After a brief physical fight, he takes her aside and explains the conversation he had earlier with Styles. There is rumored to be a group of ex-Rangers in Panama, trained under West, who turned rogue and became drug-dealers. They call themselves Section 8.

Styles is furious that Osborne and Hardy talked to Kendall a second time after he explicitly ordered them not to. He relieves Osborne of duty and asks Hardy to leave. He informs them that Dunbar and Vilmer will be taken away shortly on the transport plane that has arrived from the U.S. and he considers the investigation closed.

At the , Vilmer remarks to Hardy and Osborne in an offhand manner that he will be on the same plane with Pike. Hardy corrects him, saying that he'll be on the same plane as "Dunbar," but Vilmer says that's not right. He says Ray Dunbar is black. This means that the "Dunbar" Hardy and Osborne have been questioning is in fact Pike, the man whom West antagonized during training. Since military dog tags don't list race, all Pike had to do was switch his tags with Dunbar's in order to throw off the local authorities, then disappear after being transported for trial. Hardy and Osborne rush back to the base just as Pike is being taken onto a transport plane. Hardy grabs Pike and holds his face dangerously close to the plane's whirling propeller. The two engage in a brief screaming match, although what they say is inaudible to anyone just a few feet away. Pike then drops to his knees, sobbing, apparently remorseful for everything that had happened. Afterwards, Hardy and Osborne lead Pike away to interrogate him again now that they know the truth.

In Pike's new story, West was not shot. Pike claimed West knew about the main operation going on at the base, cocaine smuggling. He claims West confronted the Rangers in the bunker and told them that he would turn them in to authorities in the morning and tell Styles everything. A brief ensues and West escapes the bunker. Nuñez chases after him, and gets shot by West (who was standing on the roof of the bunker). Shortly after Castro and Mueller go looking for West, Pike finds Dunbar dead, West shoots Kendall, wounding him, and tries to convince Pike to give himself up. Mueller manages to kill West. Pike shoots at Mueller, and then, knowing that he would be blamed if West died, took Dunbar's dog tags. It is still thoroughly established that he managed to escape, carried Kendall through the jungle, killed Mueller and was picked up by the helicopter.

To prove his story, he gives Hardy, Osborne and Styles (who is also present at this interrogation), the number of a crate where Vilmer had stowed cocaine.

Hardy then talks to Styles alone. He says that he is curious why West wouldn't tell Styles about the drugs as soon as he suspected something. Hardy then accuses Styles of lying, he tells Styles that he believes West did in fact go to him, but that he was behind the drug dealing operation the whole time. Rather than side with West, he ordered him killed. Styles laughs off the accusations, but as Hardy starts to leave Styles offers him a percentage of the operation, once he's back in business, to keep his mouth shut. Hardy says he'll have to think about it and he turns to leave. Styles pulls out a gun to shoot Hardy, but he is shot and killed by Osborne who had been secretly watching the whole conversation.

After the military police wrap up the investigation into Syles' shooting, Osborne is about to leave the base for the night and Hardy tells her that all she has to do concerning the shooting is "Tell the story right". Osborne recalls hearing that phrase during both Kendall and Pike's stories, particularly in describing how members of the conspiracy planned to cover up West's death. This makes Osborne suspect Hardy may be somehow involved. She tails him out of the base and watches as Pike runs out from some bushes and into Hardy's jeep. She follows them by car and then by foot through the streets of and watches as the two of them enter a doorway with a big hanging above it. Osborne sneaks up behind Hardy and pulls a gun on him, believing that he is the mastermind behind both Section 8 and West's murder. She becomes confused when West, very much alive, walks up behind her. It is revealed that Section 8 is actually a special black-ops anti-drug unit led by Hardy. Now that West and his team are all officially dead, the unit can operate with much more freedom than before. "Nuñez," "Castro," "Pike" and "Dunbar" are all members of Section 8. West and Hardy then offer Osborne a job.

At the end of the film, there still remain two suspicious deaths (Meuller and Styles) and one unambiguous case of premeditated murder (Kendall), while the true events in the jungle continue to be a mystery.

Both Brian Van Holt and Giovanni Ribisi had experience portraying U.S. Army Rangers in previous films, Holt in and Ribisi in . Harry Connick, Jr. portrayed a pilot in the film .

In the film, at one point in a discussion with Colonel Styles, Travolta utters the line, "Fuck 'em if they can't take a joke". He also uttered this exact line in the blockbuster hit, .

In the flashback scene where MSG(E8) West takes Pikes sidearm he is clearly wearing Specialist(E4) rank.