The Defense industry of Russia is a strategically important sector and a large employer. It is also a significant player in the global arms market. Russia is the second largest conventional arms exporter after the United States, with $8 billions' worth of exports in 2008.

President Dmitry Medvedev with Sevmash employees in July 2009. Sevmash is Russia's largest shipbuilding company and the country's only producer of nuclear submarines.

During the crisis years of the Russian economy, the country's defence industry survived mainly on exports. Today, domestic defence procurement is an important source of income for the industry. State orders for military equipment have risen considerably during the last decade. While in 2002, the State Defense Order amounted to only RUB 62 billion, by 2007 the sum had risen to RUB 302.7 billion. When calculated in constant 2000 prices, this represents an increase by a factor of two.[3]

The State Defense Order for 2009 was expected to amount to a record of RUB 1.2 trillion, showing an increase of RUB 70 billion from the previous year. The order was expected to be raised by a further RUB 40 billion for 2010, and by RUB 60 billion for 2011.[4] In total, the state plans to spend $128 billion in military procurement in the 2009–2011 period.[5] Military-Industrial Commission of Russia is responsible for supervising the distribution and implementation of the State Defense Order.

A Sukhoi Su-30 of the Russian Air Force in flight over Russia in June 2010. Sukhoi fighters are popular export products of the Russian defense industry.

Russia is the world's second largest conventional arms exporter after the United States. In 2008, the Russian defence companies delivered over $8 billions' worth of arms to foreign customers. The most popular types of weaponry bought from Russia are Sukhoi and MiG fighters, air defense systems, helicopters, tanks, armored personnel carriers and infantry fighting vehicles.[6] Aviation products make up about half of the country's arms exports.[7]

The Moscow-based independent defense think-tank Centre for Analysis of Strategies and Technologies has analysed the identified exports of Russian weapons in the year 2009. The share of different weapon types was the following: 61% Aerospace, 21% Ground, 9% Naval, 8% Air Defense and 1% other. Algeria was the top customer with an export share of 29%, followed by India (25%) and China (10%). Vietnam became Russia's largest weapons customer in terms of new contracts signed in 2009, especially due to a large order for six Project 636M Kilo-class submarines. Vietnam is expected to considerably increase its share of Russian arms exports in the future.[9] 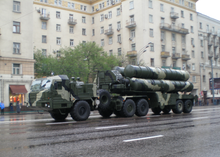 According to Centre for Analysis of Strategies and Technologies (CAST), the most successful businesses in the sector are aerospace and air defense companies. The centre's 2007 rating puts the air defense missile producer Almaz-Antey in the top position (revenue of $3.122 billion), followed by Sukhoi ($1.863 billion) and Irkut Corporation ($1.207 billion). These companies employ 81,857, over 30,000 and 11,585 people, respectively.[11] Across the top 20 rated companies, growth in military production averaged more than 25% in 2007.[11]

In 2008, the combined revenue of Russia's top 10 defense companies grew by 26% from the previous year, amounting to almost $12 billion. The top company was again Almaz-Antey, which boosted its revenue to $4.3 billion. Russian Helicopters produced 122 aircraft in 2008, increasing its revenue from $724 million to $1.7 billion. Uralvagonzavod earned $640 million by making 175 T-90 tanks: 62 for the Russian military, 60 for India, and 53 for Algeria, according to CAST.[12]

The five largest companies of the industry in 2009, based on revenue, were:[2]

Problems in the industry include a high level of debt, inflation and lack of qualified personnel. In 2008, it was reported that only 36% of strategic defense enterprises are solvent, while 23% are on the verge of bankruptcy.[13] Significant portions of the increases in Russia's defense procurement budget are being eaten up by inflation: while the country's overall inflation rate in 2008 was 13%, in certain weapon categories the figure was more than 30%.[14] Many skilled workers are nearing retirement age, and young graduates are hesitant to enter the industry due to low wages and insufficient career opportunities.[13] In 2009, a senior official said that the Russian defense industry had effectively "reached its ceiling" and could not take on any more orders.[5] Further growth will require a serious upgrade of production facilities, as well as investment in skills and training.[9]